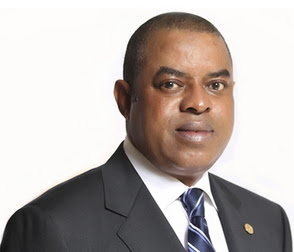 The Senator representing Lagos East Senatorial District and the
Chairman of the Senate Committee on Land Transport, Senator Gbenga Ashafa has
commended His Excellency President Muhammadu Buhari and the Honourable Minister
for Power, Works and Housing, Babatunde Raji Fashola SAN, for approving the sum
of N20 Billion Naira for the rehabilitation of the Ikorodu –Sagamu express way.

In a statement released to the press on Thursday, 29th
March, 2017, Ashafa stated that: “On behalf of the good and hardworking people
Lagos East Senatorial District in general and the good people of Ikorodu in
particular, I seize this opportunity to commend His Excellency, President
Muhamadu Buhari and the Honourable Minister for Power, Works and Housing, Mr.
Babatunde Raji Fashola on the recent approval of the sum of N20 Billion for the
rehabilitation of the Ikorodu – Shagamu road. We called and you answered.”

“I also thank His Excellency, Governor Akinwunmi Ambode our dear
Governor for the role he has played at the executive level in ensuring the
approval of the funding for the construction/rehabilitation of this project.”
Noting
the efforts and the role that the lawmakers of the Eastern District of Lagos
State, ably led by himself, Ashafa stated further that “Having observed the
perennial strain and discomfort that the above stated road project has caused
our teeming constituents, I led the clamour of other legislators from the Lagos
East Senatorial District via my letter dated 24th July, 2017 in
urging the Hon. Minister for Power, Works and Housing to prioritize the award
of the said project. The Honourable Minister graciously directed the Permanent
Secretary of the Ministry to respond vide a letter dated 18th
October, 2017 with Reference Number: DDHMS/CR/62/NASS/111/409 confirming that
the said project has been prioritized and that the procurement process for the
project had indeed commenced. Yesterday’s approval of funding by the Federal
Executive Council therefore marks the end of the award process.”

In
conclusion, Ashafa therefore expressed his excitement with regards to the
positive effect of the road construction on the people of Ikorodu as well as
his confidence in the Federal Government to ensure the speedy completion of the
project stating that  “I am deeply excited because, the completion of this
project would greatly improve the quality of life of our constituents, by
easing the stress they currently face commuting that route while also easing
the stress on the Lagos-Ibadan Expressway, by serving as a viable alternative
to commuters. I am confident that work would commence in earnest towards the
speedy completion of this important infrastructural project soonest.”