The Law In Nigeria And The Realities Of Modern Commercial Arbitration – Basit Kolapo, Saka 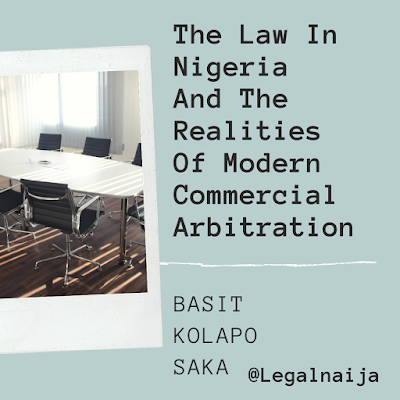 INTRODUCTION
As the
world continues to integrate, business and economic transactions have become
more. This is not to say that countries and states have to loosen their grip on
their sovereignty, NO, rather countries have to be ready to accommodate others if
the world is really going to be one big, prosperous village. International
trade naturally comes with disputes, as such laws and lawyers need to be very
flexible to accommodate this reality.

Consent Of The Attorney General Pursuant To S.84(1) of the Sheriffs & Civil Processes Act - Did CBN ...
CORONA VIRUS: Enforcement of Lockdown and Brutalisation of Citizens | Dele Adesina SAN
Paul Usoro SAN's Goodwill Message to Bwari Branch of the NBA