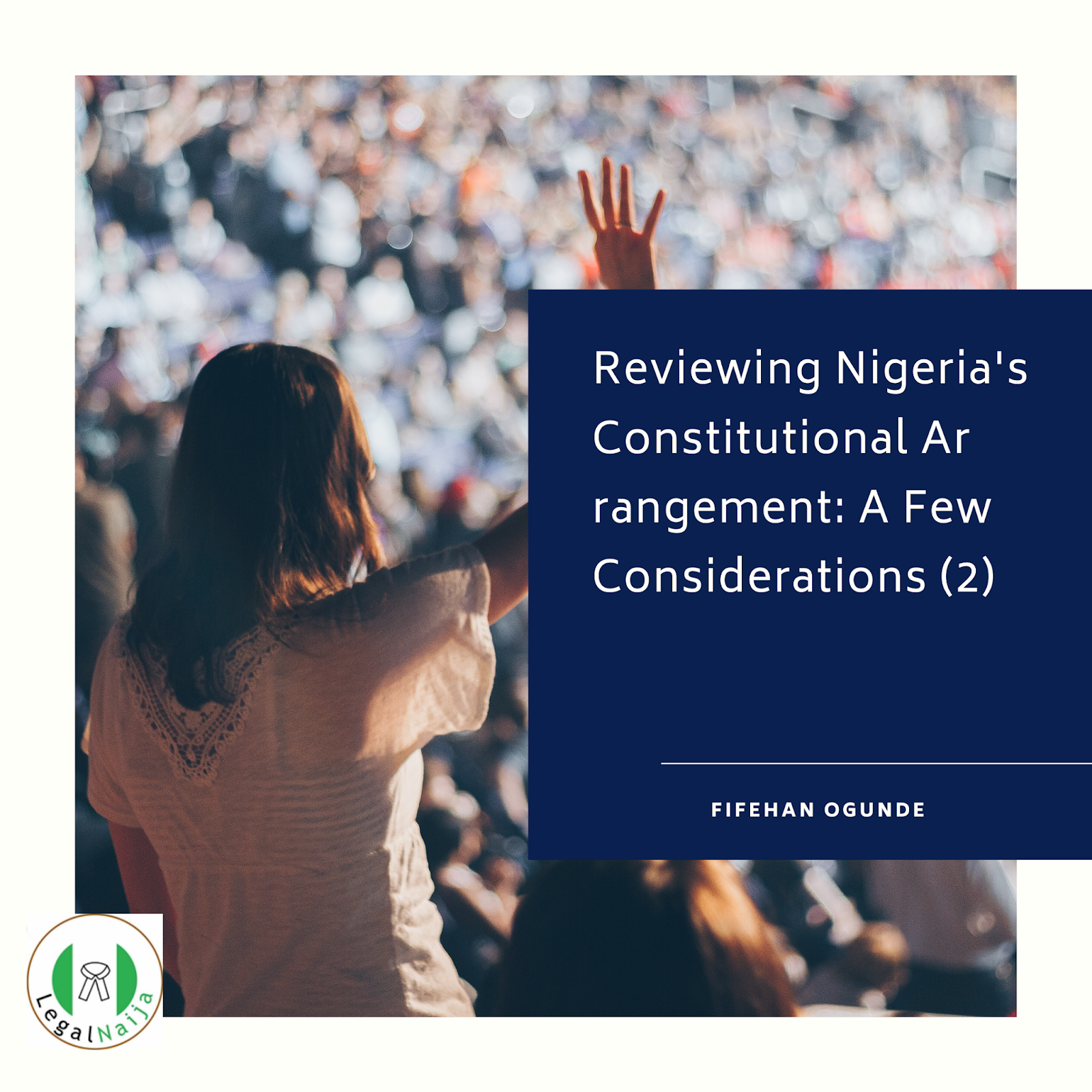 This will greatly cut expenditure in this regard and increase the availability of funds for relevant sectors of the economy. It is worth noting that members of the Senate and House of Representatives are the highest paid legislators in the world bearing in mind their salaries and allowances. There is little evidence to show that the current number is necessary to effectively exercise the law-making function of the legislative House.

Qualification for membership of the house is on these grounds: minimum age of 35 years (30 years for house of representatives), education up to School Certificate Level and membership of a political party. There is very little stated with respect to the professional experience of the individual with respect to the sensitive function of law-making. It is understandable that as an elected representative of the people, membership qualification with respect to the Senate and House of Representatives should be as diverse and all-encompassing as possible. There is very little in the constitution to guide an assessment of the suitability of law-makers for the position. This itself is in need of review. Furthermore, there is no limit to the number of terms for serving as a member of the Senate and the House of Representatives. It may be necessary to introduce some form of limitation in this regard. This could be in a manner similar to the two-term limit imposed on the office of President or state Governor.
ELECTION TO THE OFFICE OF PRESIDENT
Since 1999 when Nigeria returned to democratic rule following the death of the military dictator, General Sani Abacha, 2 out of the last 4 democratic presidents have been former military administrators. Major-General Olusegun Obasanjo was President and commander in chief of the armed forces between 1999 and 2007 (1999-2003,2003-2007) in addition to occupying office as a military administrator between 1976-1979. The current president, Muhammadu Buhari is also a former military administrator of the Federal Republic of Nigeria (1983-1985). Under the constitution, an individual is allowed to run for president unless he has been previously elected to the office of President at two previous elections. It should however in my view be amended to also exclude individuals who have occupied the post of President and Commander-in-Chief of the Armed offices under the military dispensation which at the moment is not the case. At the very least, a period of government under the military dispensation should be regarded as one term for the purpose of electing an individual to the office of President. It should also apply to those who have occupied the position of Vice-President under previous administrations.
IMMUNITY
Under the constitution, there is some level of immunity from criminal prosecution for the President and Vice-President of Nigeria as well as the Governor or Deputy Governor of a State. This may be necessary in order to allow these elected individuals perform the functions of office without any unnecessary distractions. However, it is also important to remember that they are individuals elected by a people to whom they are held accountable. The office of President/Vice President should not serve as a form of sanctuary for individuals who may be acting contrary to the interests of the nation in engaging in illegal activities. If the elected officials have engaged in criminal acts while in office, there is little need waiting for their terms to expire before they can be prosecuted. The interests of the nation is sovereign and they are also bound by the laws of the land. Breaching the laws of the land while in office should also be dealt with by the rule of law as is the case for any other individual. They may be absolved from certain requirements associated with prosecution (such as attendance of particular court proceedings) in order to enable them perform their functions pending the decision of the court. Nevertheless there is a need to reconsider the current constitutional position on immunity for elected officials.
LEGISLATIVE LISTS
Schedule II divides matters of legislative competence between the National and State Houses of Assembly. There are some problematic aspects of these lists. Item 61 of the Exclusive legislative list for instance regards as a matter of exclusive legislative competence ‘the formation, annulment and dissolution of marriages other than Islamic and Customary marriages’. The reasons for this may be understandable (protecting religious and cultural diversity). Nevertheless, such a position makes it difficult to ensure uniformity in the law pertaining to these areas. Bearing in mind the rise in the relevance of respect and protection of fundamental rights even in relation to personal matters such as marriage, one will consider it more beneficial for all forms of marriages to be included in this list. This also helps to dispel any notions of the supremacy of one religion over another.
In conclusion, the constitution of the Federal Republic of Nigeria is highly complex and intricate. It seeks to balance several competing interests and to a large extent, the attempt to do so is highly commendable. Nevertheless, there are different aspects of the constitution that by nature serve as a hindrance to the implementation of progressive laws in the Nigerian system. The 1999 constitution is largely a reproduction of the constitution enacted in 1979 (almost 30 years ago). A number of significant changes have emerged nationally and globally since then. These changes need to be reflected in our Constitution.
Fifehan Ogunde

Oluwafifehan Ogunde is an research specialist and consultant with research interests in human rights law, criminal law and constitutional law. He has a Master’s degree in Human Rights Law from the University of Nottingham and a Bachelor’s degree from the University of Sheffield. He is also a barrister and solicitor of the Federal Republic of Nigeria, having been called to the Nigerian Bar in February 2012.