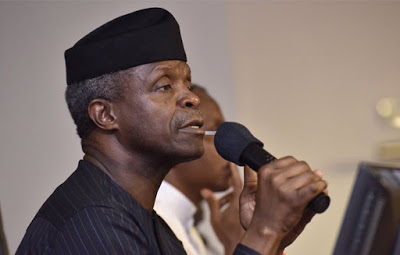 The
Vice President, Professor Yemi Osinbajo SAN, on Thursday 29th March,
2018 commended the Senator representing Lagos East Senatorial District, Senator
Gbenga B. Ashafa for his consistency in attracting developmental initiatives to
the district. This the Vice President noted has been the manner of approach of
the Distinguished Senator even since his days as the Executive Secretary of the
Lands Bureau of Lagos State.

Osinbajo
who stated this while representing His Excellency President Muhamadu Buhari, at
the Flag Off of the construction of the deep sea port, stated that “I must
commend Senator Gbenga Ashafa for the role he played in the actualization of
the Lekki Deep Sea port project. The land we are on today to flag off the
construction of this project was acquired during the tenure of Senator Ashafa
as the Executive Secretary of the Lands Bureau of Lagos State. The Senator who
now represents this district at the National Assembly has been consistent in
his activities geared towards the development of this district and the state
and I am honoured to be sharing this platform with him today.”
The Vice President in
his speech also stated that the project, when completed is expected to create up to 170,000 direct and indirect jobs in the economy.
“It is a landmark project for several reasons — the promoters of
this project are targeting, we are told, about 1.5 million TEUs (Twenty
Equivalent Units) container capacity annually, which they expect to grow to
about 2.7 million and 4.7 million TEUs when the project commences.
”With this feat, this sea port will become one of the largest in
our region and serve as a hub for ports operations in the whole of West Africa.
”There is no question at all that the project will be the
largest in Sub-Saharan Africa and possibly, the largest in Africa.
On
his part, Senator Ashafa commended the Muhamadu Buhari Government for its
dedication to ensuring that every nook and cranney of Nigeria enjoys
infrastructural projects. He also thanked the Federal Government and the Lagos
State Government led by Governor Akinwunmi Ambode on behalf of the people of
Ibeju Lekki and Lagos East for making the project a reality.

The Effect of COVID-19 in the Maritime Industry: Invoking the ‘OFF HIRE CLAUSE’ in a Time Charter ...
“Uncle, Stop Touching” “Sorry Madam, Sorry | Chika Maduakolam
A Critical And Unbiased Assessment Of The Best Candidate For The Office Of NBA President