To Change Society, the Bar must discover its roots | John Demide 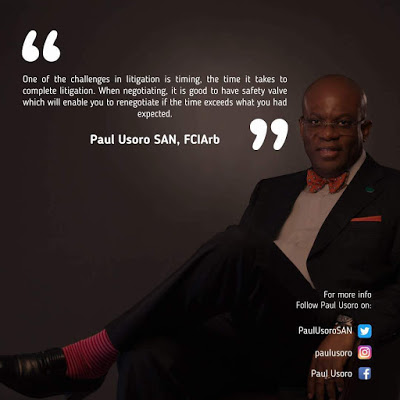 The Nigerian Bar as an Entity is in need of a Leader who knows the purpose of being an instrument of change and influence. A man who understands that philanthropy and service go hand in hand, a man who knows that as much as the rule of law seeks to engender order and compliance in a society, it is also meant to speak to the heartbeat of society and connect with them fostering concern and brotherhood.
This I believe is exemplified in the person of Paul Usoro, SAN. The learned silk in a visit conducted sometime earlier in the year to the internally displaced person’s camp in Maiduguri, Borno State was not under any obligation to seek votes from the IDPs who are everyday Nigerians. Rather on the contrary, he was moved by the plight of the society and reached out and showed what it means to be one who gives back to the society within which one lives and operates. He gave a goodwill gift to the IDPs cumulatively valued at three million naira (N 3,000,000:00) in bedding wears and food supplies. This and more which he has exhibited, I believe is an unfettered example of what Corporate Social Responsibility reflects.
I have watched fellow colleagues and seniors raise arguments and counter arguments on different platforms as to the propriety or otherwise for his eligibility to lead the bar and I have even engaged recently a person who was trying to put to task the philanthropist side of the learned silk. Blindly seeking to create a connection between two independent claims that have no bearing whatsoever to his capacity to lead. I say, let us look at the truly innate elements of the bar that need to be addressed to which the learned Silk has been bold enough to speak up on.
One of such key issues bordered on the state of our Law officers and their exclusion from contesting for the national office solely on the premise of their being found by fate to be working in the Ministry of Justice. He made a point to state that they cannot because of their position of practice be put in the back burner when it comes to the determination of the fate of their parent association.