The Need for Contract of Employment| by Kingsley Ugochukwu Ani Esq. 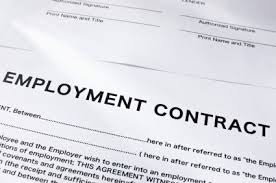 It is a good thing when
you are offered that new job at that new company you applied to alongside
several hundred other applicants. And that job, after three years of unemployment;
now you cannot wait to start working right away and start earning  your pay. You are eager to start working, to
start putting in the hours and doing the eight-to-five grind daily. You want to
put in your own quota and be rewarded for the good work. That’s good.
Question: Did your boss
get you to sign a contract of employment?
If the answer is yes, and
the contract of employment was well drawn by a good professional with a
well-formed knowledge of employment law, then you are probably in safe hands
because of the fact that your employer must have taken into cognizance a lot of
factors pertaining to your employment. He must looked at the laws and drafted
the contract accordingly.

If no, you might be
tempted to ask: what’s the need for one anyway?I have been
employed, and that is all
that matters, yes?

No. The answer is no; that
is not all that matters.

There is the need for a
contract of employment to be drawn up and duly signed by the parties involved
the employer and the employee for a myriad of reasons you might know nothing
about until trouble comes knocking on your door. And trouble will come knocking
on your day in some situations, particularly as it pertains to the severance of
the employer-employee relationship on the terms of the employee. The reason is
because, most times, employers would want for the relationship to be severed on
their own terms.

Let me give you an
instance.
Mr A is a writer and also
a website engineer. He got employed by ABC company to work at their head office
in Victoria Island, Lagos. Unfortunately, he did not sign a contract of
employment at the time he entered into the job placement to work for the firm.

After working there for a
period of seven months, he subsequently got granted a Writers’ Fellowship at
the Writing Institute, Johannesburg. He told his boss about it this one-month
writing fellowship. The boss unequivocally said no, and that was the end of the
matter. If A was unhappy about it, then the door was open for him to leave.

Two years later, after
working for long months and having no break, he asked his boss for a one-week
paid-or-unpaid vacation since he wanted to take some time off and relax. The
boss said no; there was a lot of work in the office and they could not afford to
give him the break he needed. Perhaps another time? Or, if he was desperately
in need of such a break, then he might as well consider his contract of
employment terminated. There were several applications on the man’s desk and he
could replace A with any of them any day.

On another instance, the
boss called him in to the office to work on a national holiday; he did that but
received no pay. Sometimes too, he works very late at the office and the boss
offers him no remuneration for the said overtime. After all, he cannot hold his
boss to anything because they have no agreement governing their relationship.

Note that said boss does
not care for his welfare: if he is no longer interested in collecting his
salary, then he should find employment elsewhere. Mr A needs the money, so he
stayed on.

Analysis
Mr A. is under the full
control of his boss. He is being paid well, they owe him no salaries payments.
In other words, he has nothing to complain about. Still, his boss owns him and
he knows it, though there is nothing he can do about it.
Implications
All the above would have
undoubtedly been forestalled by a contract of employment. If at the time of Mr. A’s
entering into the job placement, he had demanded for, and signed, a contract of
employment with his boss, then he would most likely not be having these
problems. A lot of issues and concerns which he felt would likely arise in the
course of his employment would have been effectively handled in the said contract
of employment.

Issues dealt with in
contracts of employment –
The list is positively
endless, and it all depends on the nature of the work, the industry involved,
alongside a host of other numerous considerations the parties can take into cognizance
when entering into a contract for employment. Plus, do not forget the applicable
laws, which most employees, and several employers, are deliriously oblivious
of. After all, who needs the laws, yes? Wrong; the laws are there for a reason,
particularly for the protection of employees.

For instance, in the oil
and gas industry in Nigeria, oil companies have laid off an unusually high
number of employees due to the current economic recession biting at the
Nigerian economy. What the employees have no knowledge of is the fact that there
is a provision to the effect that the company must notify the Department
of Petroleum Resources before they terminate. They do not, and the employees
have absolutely no knowledge of this. They just pack their bags, cry a few
tears, and then leave. The employers smile, pack themselves off to their posh
offices, and take sips of
creamed coffee. Life goes
on.

Thus, if the employer
reneges on any of the articles in a contract of employment, or goes against the
labor laws designed to protect the interest of the employees, then the employee
can call the boss up on this. He can even go to court to enforce said contract.

But then, most employers
will be unwilling to go to court once they know and understand that you know
your rights and can take the necessary steps to enforce those rights.

Conclusion
It is a wonderful thing if
and when a job seeker subsequently manages to snag a job. However, do not be so
happy with your new position and make the mistake of not putting the terms of
your employment in writing. You might get to work for years without problems,
but you stand the risk of running into problems one day, and then you will see
the need for a contract of employment. Then you will start wishing that you had
ensured that your boss prepared and had you sign a contract of employment which
isn’t too stringent and onerous. After all, contracts of employment are there
to protect the interest of employees, and even employers.

About the Author:
Kingsley Ugochukwu Ani
Esq. is a legal practitioner, blogger, corporate branding expert, and human
rights activist living and working in Lagos, Nigeria. You can contact him via
+2347035074930, aniugochukwu@gmail.com or on Linkedin, Facebook, and connect
with him on Twitter.