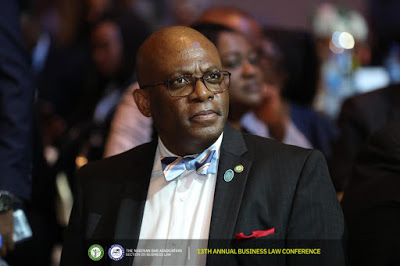 PREVENTION OF HON. JUSTICE ELIZABETH KARATU FROM PERFORMING HER STATUTORY JUDICIAL FUNCTIONS”
The attention of the President of the Nigerian Bar Association, Paul Usoro,SAN has been drawn to a video that has gone viral online, an showing a Civil Defence official preventing a Judge of the Kebbi State High Court, Hon. Justice Elizabeth Karatu from accessing her court for the purpose of sitting to deliver some judgments reserved for that day.
The Nigerian Bar Association has launched and investigation into the incident and will revert upon conclusion of its investigation.
In the meantime, the Nigerian Bar Association reiterates the Independence of the Judiciary as a separate arm of government and urges agencies under the Executive arm to refrain from interfering or doing anything that would amount to unlawful or u constitutional interference with Judicial functions and perversion of justice.
The Nigerian Bar Association at its National Executive Committee meeting held on the 20th day of June, 2019 in Abuja had issued a communique condemning the excessive and unbridled interference by the Executive arm of government, in the affairs of the Judiciary, and demanding that the continued intimidation and harassment of Judicial officers all over the country must stop.
Nigeria is a country of laws; a constitutional democracy. The survival of democracy can only be guaranteed upon the entrenchment of rule of law and separation of powers, particularly the Independence of the Judiciary. The Executive arm of government is not superior to the Judicial arm and must not play the overlord in a democratic dispensation. The lives and official positions of Judges should not be threatened while dispensing their official functions.
The Nigerian Bar Association therefore calls upon the Inspector General of Police to investigate the unfortunate incident of preventing Hon. Justice Elizabeth Karatu from performing her lawful Judicial functions by officials of the Nigerian Security and Civil Defence Corp and to bring to book, every person found culpable in the disgraceful intrusion.
The Nigerian Bar Association also calls upon the various governmnts and public officials in Nigeria to obey the laws of the country that they have sworn to protect and preserve; and to respect the sanctity of the Independence of the Judiciary. This is necessary, if this country must move forward.

PRINCE ENWEREM, ESQ WAS DEDICATED AND COMMITTED TO THE WELFARE OF YOUNG LAWYERS | CAROLINE IBHARUNEA...
INFOGRAPH
An Appraisal of the Regulatory Framework for Investment in the Nigerian Agricultural Sector – Uche M...