PENALTY FOR DEALING IN STOLEN PROPERTY 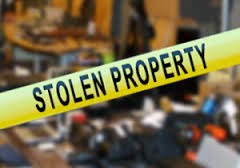 It is morally wrong to steal, whether its a million dollars
or just a few Naira notes. At least from the way I was raised, that is and the
Nigerian Criminal Code Act, CAP C38, LFN 2004 confirms same. Recently, I read
about a robbery syndicate who specialised in stealing cars and selling them off,
the members had been apprehended by the police and the person who disposed of
the cars for them was also arrested and prosecuted.
It is a crime to receive stolen or fraudulently obtained
property and such person may be found to be as guilty as the person who stole
the property in the first place. Thus, if a friend of yours steals or
fraudulently obtains a property and hands same over to you for safe keeping or
disposal, you will be liable and found guilty for being in possession of the
said item.
The law that supports the aforementioned position can be
found in Chapter C38, Sections 427 of the Criminal Code Act. It provides that –
Any person who receives anything which has been obtained by means of an act
that constitutes a felony or misdemeanour, knowing same to be so obtained, is
guilty of a felony. It does not matter if the act was done outside Nigeria, all
that matters is that it would have been a crime if done in Nigeria and also a
crime under the laws of the place where the act was committed.
If the offence by which the thing obtained is a felony, the
offender is liable to imprisonment for 14 years, if the thing so obtained was a
postal matter, chattel, money or valuable security, the offender will be liable
to imprisonment for life. In other cases, such offender is liable to
imprisonment for seven years.
Note that in order to prove that receiving of anything under
these circumstances stated above, it is sufficient to show that the accused
person has either alone or jointly with some other persons, had the thing in
his possession, or aid in concealing it or disposing of it.
From the above, you must have learnt that not only is stealing
a crime but also that receiving stolen property is seriously frowned upon and
anyone found guilty of same may be liable to as much as life imprisonment.
Adedunmade Onibokun Esq
dunmadeo@yahoo.com
@adedunmade

Photos: Paul Usoro and his passion for mentoring
A Critical And Unbiased Assessment Of The Best Candidate For The Office Of NBA President
OUR PROBLEM WITH BUYING FUEL IN CANS