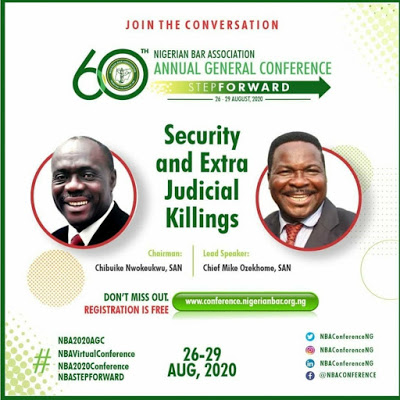 The
reports of extra judicial killings by security agencies in Nigeria is not news
anymore, neither has the issue been adequately addressed. For instance, the
prevalent state of insecurity in most regions in Nigeria has resulted in an
increased deployment of security operatives all over the country. Of these
security agencies, some have gained notoriety for perpetuating extra judicial
killings.

It is
alleged that the Nigerian Police Force (NPF) alone is responsible for hundreds
of extrajudicial killings yearly[1].
For instance, in December 2019 a mechanic, Chima Ikwunado allegedly died after
being tortured in a police station in Port Harcourt[2]. However,
majority of these cases don’t get media attention; hence they go uninvestigated
and unpunished.
Despite
the continuous outpour of public outrage regarding the menace of extra judicial
killings by security operatives in the country, no substantial reform has been
embarked upon by the government. In fact Amnesty International on the 26th
of June, 2020, stated that The
Nigerian authorities have failed to prosecute a single officer from the
notorious Special Anti-Robbery Squad (SARS), despite anti-torture legislation
passed in 2017 and evidence that its members continue to use torture and other
ill-treatment to execute, punish and extract information from suspects, Amnesty
International said today.
In a
new report, Time to End Impunity, Amnesty International
documented at least 82 cases of torture, ill treatment and extra-judicial
execution by SARS between January 2017 and May 2020. The victims of the police
unit, set up to fight violent crimes, are reportedly predominantly male between
the ages of 18 and 35, from low-income backgrounds and vulnerable groups.
However,
what is the role of lawyers in this regard, what role is the Nigerian Bar
Association playing to ensure such acts are a thing of the past. This will be a
major topic at the upcoming Annual General Conference of the NBA scheduled for Thursday
27th August, 2020.
The
Panelists will include  –
·
Chairman: Chibuike Nwokeuku SAN, Principal Partner Chibuike
Nwokeukwu SAN & Associates
·
Lead Speaker: Chief Mike Ozekhome SAN, Chief Counsel &
Head of Chambers at Mike Ozekhome’s Chambers
·
Monday Onyekachi Ubani, Principal Partner Ubani & Co.
·
Aisha Mohammed
·
Ikide Ighillenus
·
Ali Malik, SAN
All
lawyers are urged to participate actively in this discuss so the Bar can
fashion out a way to put an end to the subject of extra – judicial killing once
and for all while ensuring the rights of average Nigerians are protected  and enforced.
[1]
Nigeria: Investigate widespread killings by police. Police chief boasts of 785
killings in 90 days, Human Rights Watch (Nov.18 2007)
[2]
Police dismiss four officers for murder of mechanic in Rivers state, Sahara
Reporters (Jul. 7 2020)