#NBAAGC2019 Session: The Crisis of Sexual and Gender based Violence in our Communities 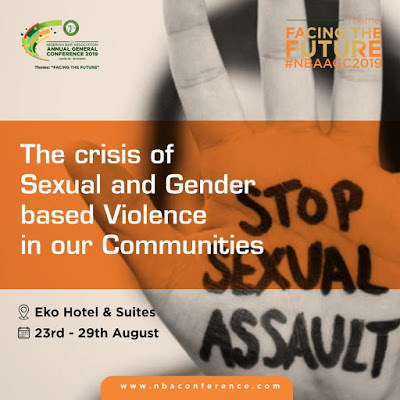 Gender-Based Violence (GBV),
sometimes also referred to as Sexual and Gender-Based Violence (SGBV) is any
harmful act of sexual, physical, psychological, mental, and emotional abuse
that is perpetrated against a person’s will and that is based on socially
ascribed (i.e. gender) differences between males and females.
1 IN 3 women
worldwide will experience physical or sexual abuse in her lifetime. Men and
boys are also targeted.

From January to December
2017, a total number of 1,639 survivors and those at risk of SGBV were referred
to access specialised services including psychosocial counselling, medical
care, legal and safety and security services. Out of these, 156 survivors
accessed case management services and 226 benefited from legal assistance
through UNHCR’s Access to Justice project implemented in Northeast by the
Nigerian Bar Association (NBA).

Furthermore, issues that
have escalated the incidents of sexual and gender based violence in Nigeria includes
the high rate of terrorism in some parts of the country. The prevalence of sexual
violence within the Boko Haram crisis has been widely reported in humanitarian
assessments, human rights reports and media coverage from the early days of the
insurgency.

Boko Haram’s abuses against women and girls, including abduction,
forced conversion to Islam, physical and psychological abuse, forced labour,
forced participation in insurgency operations and forced marriage, rape, and
other sexual abuse have inspired fear among local communities in north-east
Nigeria and contributed to the group’s notoriety, both within the region and
globally. However, while Boko Haram’s violence against women and girls has been
at the center of public attention to the crisis, delivering protection and
support for women and girls has been an ongoing challenge in the humanitarian
response.

These and many more issues
would be discussed at the Annual General Conference of the Nigerian Bar
Association. Experts and legal practitioners will seek to chart a course to
reducing the incidences of SGBV in Nigeria. Join the discussion at the
#NBAAGC2019 breakout session.