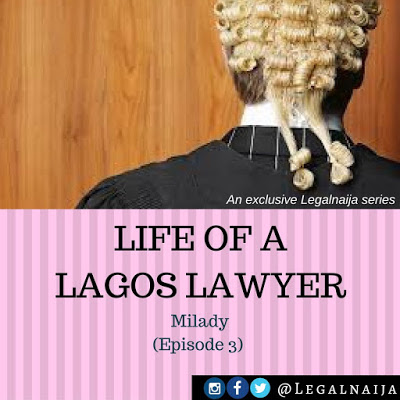 It all started on the day of my Call. My father was so proud that his little angel was becoming a Barrister; He had put up my Pre-Call photo as his display picture on Facebook with the tagline “Beware, my daughter is a lawyer” and invited everyone to my call-to-bar celebration party.

It was an exciting day and the ceremony was beautiful. After studying for the bar exams like my life depended on it and spending hours in tutorials even till 2am, this was the reward for my success, the opportunity to be called into the noble legal profession.
I felt really happy and remembered this day was possible because at the end of 1920s, which marked the beginning of the emancipation of women, the judgment in Edwards v. A.G. of Canada (1930) AC 124 was overturned by the Privy Council in a landmark decision that heralded the entrance of women into the legal profession. I was determined to stand out in the legal profession and I gave all to ensure I graduated with a first class at the university and in law school, however faith had other plans. As I graduated with a second class lower division, in both schools. However, if Gani could be such a great lawyer with a 3rd class degree, what did I have to worry about.
Now, a couple of years down the line with considerable practice experience under my belt and a great career ahead of me, my mother daily reminds me of the one thing she believes I am lacking. Even in my sleep I can hear her words clearly in my head “When would you bring someone home, D-law?”; a name she uses when she wants to tease me, knowing it’s my dad’s new favourite pet name for me. “Don’t you want me to carry my grand-children?”; “when will you bring a husband home?” and on and on. It’s worse when she tries to play match-maker, she has forced me to meet 8 different men, children of her friends, whom she believed would have made good husbands.
Though, for reasons beyond my control, I have never liked any. My mother likes to say I am choosy but it’s not my fault they all had something incredibly wrong with them. The 1st had a terrible mouth odour, I almost puked when he said hi; the 2nd and 3rd were mummy’s boys; the 4th had no future ambition, total NFA who asked me for 500 naira to buy recharge card on the first day we met; the 5th had baby mama drama; the 6th believed women were only meant to be in the bedroom, kitchen and the other room; the 7th was a banker with too much debt to be relaxed, and was always going on about meeting his targets; while the last who certainly was not the least was a serial dater and professional bachelor who had no plans for marriage.
I am very beautiful and I know it, every guy around me as said it at one time or the other. But this beautiful face, flawless yellow skin and coca-cola shaped figure can be a distraction from my work. In court, lawyers are always trying to flirt with me, senior lawyers are always handing me their cards and making me promise to call. At one time, an older lawyer gave me a 5,000,000 Naira cheque and asked me to be his 2nd wife.
It’s also very annoying when people sometimes have a wrong notion about me; they see me as not being strong enough and clients most of the time, prefer male lawyers to handle their cases including female clients for that matter. Even though I know most of the male lawyers in my firm aren’t as smart as I am. Like it’s not bad enough, some employers choose not to employ female lawyers. However, saying an outright no is better than employing me for my looks, like an employer who once asked me to sit on his laps during an interview and went on and on about how sexy my figure was and he wanted me to spend the weekend with him in his guest house on the island.
Do I have plans to get married? Of course I do. And somehow in the middle of my crazy work schedule and limited time for myself, I will certainly find a man or my man will find me. Dad always told me that the traditional role of a woman as a child bearer, house keeper and a cook for the husband, children and larger family puts her at a great disadvantage in taking her proper position at work life, so he encourages me to make the most of my career and profession, a male dominated one if I might add.
However, I am not done reminiscing when Oga walks in looking furious, “where is the Head of Chambers? “ he says clutching what appeared to be a letter in his arms. “Why would he address such a letter to me” he shouts as he waves the paper around and eventually throws it on my table and walks back to his office still livid.
Curiously, I reached for the letter wondering what it was about. The heading which read ‘Letter of Resignation” startled me. I knew the H.O.C was given a query the night before for closing too early at 8.30pm but no one expected him to resign. Picking the letter up once again, I begin reading –

“Yesterday, I was served with a query for leaving the office early at 8.30pm; even though the official closing hour is 6pm every weekeday. However, I am so ashamed of my actions that I hereby resign……………”

Pls join us next weekend for another episode of “Life of a Lagos Lawyer”. An exclusive Legalnaija series.

DUTIES OF YOUR LOCAL GOVERNMENT COUNCIL
Does the Supreme Court still have the Power to Hear Appeal on Grounds of Mixed Law and Facts? By O.G...
#NBAAGC2021: 6 Days Away