Life of a Lagos Lawyer (Episode 4) – Big Law to Solo 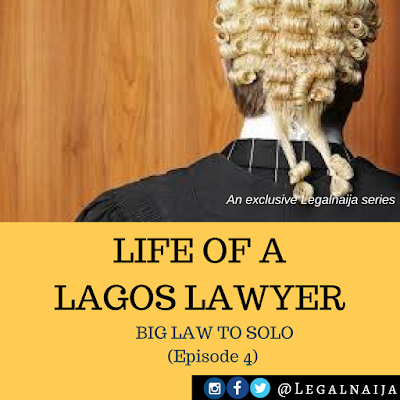 It’s been 7 weeks since I
dropped my resignation letter out of frustration. I walked out of Oga’s office
with so much confidence, one would have thought, I just got appointed the personal
house boy to the PA of the Governor’s special adviser a special adviser to
the President. Oga had given me a query for leaving the office at 8.30pm to
attend to some personal matters even though my letter of employment said 6pm. I
am sure the contents of my resignation letter must have passed my message
across very well, I used the most polite of languages and gently eased the cup
of employment from my head. It said –
“Dear
Sir,
Yesterday,
I was served a query for leaving the office at 8pm and it was cited as a cause
for gross- misconduct and indiscipline. My I humbly state that I am most
ashamed of my actions and now hereby resign with immediate effect on the
following grounds –
1.     I am the Deputy – Choir Director in my
church but for the past 7 months, I have not attended service because I am
always either at the office or on an official assignment but this is no excuse
as I am most ashamed for leaving the office at 8.30pm.
2.     I don’t have a relationship because I
don’t have time for a social life, let alone have one because I leave the
office at 10pm on weekdays, 6pm on Saturdays and probably 4pm on Sundays but
this is no excuse as I am most ashamed for leaving the office at 8.30pm.
3.     I have been robbed severally on the
way back home from work, and I am now familiar with the hoodlums in the
neighbourhood who used to rob me. They decided to allow me safe passage having
argued my plight on one occasion that they had robbed me so many times, I was
owed safe passage, the Chairman had loved my attitude and now He shouts “D-Law”
in greeting every time I pass by but this is no excuse as I am most ashamed for
leaving the office at 8.30pm.
4.      I have sacrificed my time and energy for the
firm for 15 years and I am still not a partner but this is no excuse as I am
most ashamed for leaving the office at 8.30pm.
5.     My neighbours have nicknamed me Ghost,
the resident you hear of but never see because I am always busy at the office
or with official assignments but this is no excuse as I am most ashamed for leaving
the office at 8.30pm.
6.     My salary after 15years at the Bar is
smaller than what fresh wigs earn in their first employment at certain law
firms but this is no excuse as I am most ashamed for leaving the office at
8.30pm.
Because
of the utmost shame I feel from the above mentioned reasons and the fact that I
cannot forgive myself for breaching office protocol to the extent of leaving
the office at 8.30pm. I humbly resign. Maybe when I have found it in my heart
to discover self –forgiveness, I will return. I am most obliged.
Thank
you. “
I still smile every time I
remember Oga’s secretary’s face as she began reading the letter, even the Head
of Chambers said “Oga has to respond to this one personally o”.
However, now that I am
sitting in the corner shop office which I am sharing with 5 other
lawyers, life looks like a bit different and I am thinking Oga may have not
been bad after all.  He always paid
salaries on time and every December, there was a small bonus for everybody
especially if it was a good year. Now, I have to go out to find clients and
money for myself.
Many people have been
advising me not to worry that things will get better but how do I tell that to my
Landlord and  the Nepa official coming to
disconnect my light tomorrow after 3 months of warning. Nobody told me this was
what going solo was about. But like my fellow country people are prone to
saying “it is well”.
One client has however
come over and he wants to sue his former employers for loss of his hearing due
to his working conditions. He was the floor manager at the manufacturing
company and 25 years of manning the engines had taken a toll on his hearing. I
almost had to shout at the top of my voice that he could approach the courts for
justice as all his actions to engage the company had been futile and according
to Section 10 of the Employees Compensation Act, “an employee who suffers from
hearing impairment due the course of the employee’s employment is liable
to compensation”. He is extremely pleased and as asked members of his workers
union to join us in court next week for argument of his case.
I am however sizing him up
and wondering when best to raise the issue of my professional fee. “Errrr, sir,
there is just one thing that we have to talk about sir and it’s the
professional fee, we will be charging 500,000 Naira sir. I still wonder how he was
able to hear the figure clearly despite his loss of hearing and I ddn’t raise
my voice. “AHHHHHHH, D-Law, he screamed, just to quickly sue someone and come
back is 500,000 Naira, don’t worry let me pay you 30,000 Naira cash and give
you bush-meat, yam and plaintain from my brother’s farm”. Bush-meat! Yam!
Plaintain! Oga for where now, shuu, see ……………………………………..
Join us next weekend for another
episode of “Life of a Lagos Lawyer”. An exclusive Legalnaija series. PLESE NOTE
THAT THIS WORK IS PURELY FICTION AND IF IT RELATES TO ANY INCIDENT OR PERSON IN
ACTUAL LIFE, IT IS A MERE COINCIDENCE.