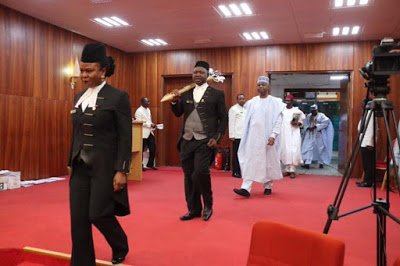 The 8th Senate led by Dr. Bukola Saraki is definitely stamping its legislative authority by not only out-doing its predecessor assemblies but also by introducing dynamic and much needed legislation for the growth and development of the nation. The list of over 200 Bills passed by the Senate can be viewed here.

However, one significant bill we would be tracking is The Bill for an Act to repeal the Police Act, 2004 and establish the Police Act (Amendment) Bill, 2018 (SB. 683).

Most certainly all Nigerians especially police officers agree that the Nigerian Police needs to be reformed as a matter of supreme urgency. Social Media calls with the hashtag #ReformNigerianPolice; #Reformsars and #Endsars have led to presidential executive orders on police reforms.

The Bill seeks to deliver the much needed legislative intervention required to amend the Nigerian Police Act; which has been in existence without any form of amendment since 1979. Most certainly the current law is out of date and not in line with current national realities.

Some of the strategic provisions of The Bill include an amendment to the functions of the police; where it provides that;

The functions of the #PoliceReformBill shall include:
I.Creating and establishing a functioning system that can easily detect crimes, apprehend offenders and effect proper punishment of perpetrators within its jurisdiction.

II.Creating a safer environment for Nigerian citizens using a new policing structure that will ensure the protection of the rights and freedom of Nigerians.

III.Make room for more collaboration between the police and citizens and communities they protect.

Other critical provisions of The Bill will also include provisions such as;

I.Prohibition of a Police Officer from being the prosecutor in any matter that said officer participated, this is to help promote justice and allow for a free and fair trial.

II.Prohibition and criminalization of drinking while on duty.

III.Establishing an authority responsible for the collection of complaints from Nigerian citizens against police officers, ensuring more competent service for the police.

IV.Ensuring that the police officers are held accountable for every action taken, particularly in the areas of arrest and detention of persons.

VI.Provision of bail for any citizen arrested without a warrant, ensuring that such person are not allowed to be kept in detention for more than 24 hours without being charged to court.

Most certainly when this Bill becomes law it would lead to the growth in expertise and operations of the Nigerian Police.