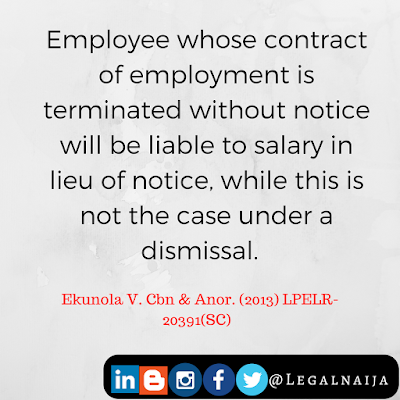 Why Employer must give reason for
termination of employment

From a review of 257 employment cases
decided by Nigeria courts, 17 by Canadian courts and 81 by the English courts,
I have observed that the relationship between an employer and a worker neither
starts nor end with equal bargaining power notwithstanding that it is created
and determined by mutual agreement. The employer will always have an advantage
over the employee. One of the most apparent instances of such inequality of
positions is (or what used to be) the employer’s power to hire and fire a
worker for good, bad or no reason at all. This was so for many in years in
simple employment contract. However, the law is constantly changing to ensure a
greater level of protection for the workers.

Termination without reason is unlawful
Times have changed in labour relations. The
employer’s power to hire and fire for bad or no reason is no more without
financial consequence to the employer. For an employer to validly terminate a
contract of employment, the employer is required to do so for a reason, and of
course, a good reason. An employer is also required to state the reason in the
letter of termination of employment. This requirement holds in all employment
cases, whether the employment enjoys statutory protection or is that of a
master-servant kind.

Reason for termination must be proved by
credible evidence
Where an employment is terminated for a
reason, the law imposes a duty on the employer to justify any reason given for
the termination. Usually, if the reason stated in the letter of termination is
disputed by the worker, the employer must then prove to the Court during trial
that, indeed, the worker was justifiably disengaged. What amounts to credible
evidence depends on the facts of each case, the law of evidence and other
procedural laws as well as the judicial discretion of the presiding judge all
of which involve intricate and complex balancing. For instance, in between
one Nwako and the First City Monument Bank Plc¸ the
Claimant, a branch manager of the defendant bank, was dismissed for releasing
ATL (Authority To Load) to a customer of the bank without any cash lodgment,
thereby causing the bank a loss to the tune of N24,806,550.41. In justifying
the reason for the Claimant’s dismissal, the bank tendered during trial, and
the Court was satisfied with, the relevant Credit Appraisal Memorandum, the
offer letter of credit facility and the provisions of Credit Guidelines and
Sanctionable Offences Policy of the bank which the Claimant ought to comply
with before releasing the ATL as well as evidence of the Claimant’s failure to
comply with them.

Reason for termination must comply with
international labour best practices
The National Industrial Courts in Nigeria
are now required by law to take cognizance of international best practices in
labour relations when deciding matters on employment disputes. This implies
that a decision of an employer to terminate a worker’s service must be reviewed
by a judge against international best standards in labour practice around the
world. Interestingly, this legal requirement once again restates the need for
lawyers and judges (as well as employers) in Nigeria to be abreast of any
developments in labour laws of other countries of the world. Where a reason
stated for disengaging a worker is bad or inconsistent with any labour law,
convention, treaty or international best practices, the employer will be liable
for wrongful termination. It is however unclear and, therefore, arguable
if Nigerian court will accept as international best practice a singular event
or precedent which has not enjoyed consistent judicial restatement in the
international jurisdiction. In any event, it is advised that corporate bodies
should keep proper records of all disciplinary decisions against a worker in
the event that it later becomes necessary for the employer to justify the
reason for termination of the worker’s service.

The list of reasons for which an employer
may disengage a worker is a fairly long, perhaps an endless one. It is
difficult to determine what reason will suffice for every employment
relationship. Nigeria courts usually determine reasons for termination of
employment on a case by case basis, being guided by the terms of the employment
contracts (particularly the details of the employee hand book or employer’s
disciplinary procedure), industry practice, international best practice and the
facts of each case.

From my review of 257 employment cases
decided by Nigerian courts, the following reasons, not arranged in any
sequence, have been accepted as good reasons to disengage a worker, namely:

1. Commission of a crime such as
falsifying records, forgery, bribery, stealing, corruption, money laundering,
homosexuality, cybercrime, threat to life, manslaughter, murder, terrorism etc.
Even though the Constitution presumes every accused person to be innocent, the
Supreme Court of Nigeria has held that such presumption does not preclude an
employer from enforcing its disciplinary procedure against a worker who has
been alleged of a crime notwithstanding that the worker is yet to be tried,
convicted or even if he/she has been acquitted of the crime;

2. Misconduct such as insubordination,
office gossip, taking too much time off work, consuming alcohol or
intoxication at work, disrespect to senior staff or management of an
organization, violating company’s policy (or any misconduct as may be defined
by the employment contract). If a conduct is not defined as misconduct in the
contract of employment or a crime according to law, it is unlikely that the
employer would be allowed to fire a worker on that basis;

5. Poor performance from incompetence,
poor quality of work, low or lack of productivity;

7. Attendance issues such as chronic
tardiness or staying away from work without official leave or acceptable
excuse;

8. Unethical conduct touching on
sexual, drug, alcoholic, smoking or other related activities in prohibited
forms. Any or all the foregoing may be the same as or different from unlawful
conduct, misconduct or gross misconduct listed out above;

9. Unlawful conduct such as physical
violence, threats or discriminatory practices against other employees. Any or
all of the foregoing may be the same as or different from unethical conduct,
misconduct or gross misconduct listed out above;

10. Any other reason stated in a
contract of employment.

Exemplary Damages is the remedy for
terminating employment without cause or for bad cause.

Generally, a worker who is aggrieved
by an unlawful termination of a simple contract of employment can only apply to
the Court for damages, not reinstatement. Damages is a monetary compensation
that is awarded by the National Industrial Court for wrongful termination of
employment. No worker can be reinstated by a Court to a job from which he or
she has been disengaged, however bad the procedure for termination, unless the
employment is regulated by some statutory procedures.

An unlawfully disengaged worker, if
successful in an action against the employer, may be awarded the amount
representing his salary for the agreed length of notice for termination and, in
some cases, exemplary damages, in addition to any outstanding or terminal
benefits due to him or her. Nigerian Court usually does not award general
damages in employment litigation except exemplary damages. Exemplary damages
may be awarded, as the court deems fit, to a worker whenever the
employer’s conduct is sufficiently outrageous to merit punishment such as where
the company was malicious, fraudulent, cruel, insolent to the worker or acted
in flagrant disregard of the law or an acceptable international best practice,
in dealing with the worker. It should be noted that in awarding exemplary
damages, the Court would be satisfied to award the amount claimed (or a lesser
sum in deserving circumstances) upon proof that the employer did not give any
reason or comply with the law or an international best practice in terminating
a worker’s contract of employment. 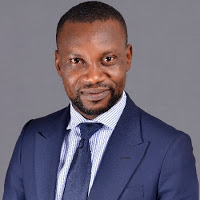