Fake News and The War Against COVID-19 – Nonso Anyasi 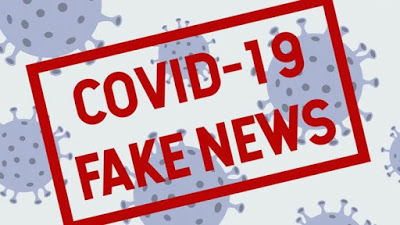 There
is no gainsaying that the entire planet earth has been held hostage by the
novel Corona Virus pandemic which has spread across the different continents
and has caused its human population to run into hiding in a concerted bid to
halt the spread of the virus. The various lockdown orders issued by governments
all over the world has compelled citizens to spend entirety of their time
indoors and nearly idle, with many having little to do but scavenge the
internet in search for updates on the war against the pandemic. The increasing
idleness occasioned by the stay-at-home orders worldwide, coupled with
widespread panic and the nearing collapse of several economies have led to the surge
and development of fake news relating to the cause and effect of the virus all
over the world. Several individuals and organizations have resorted to
manufacturing and spreading fake news largely bordering on conspiracy theories
to advance their selfish interests. The continuous activities of these fake
news merchants have begun to take its toll on the global battle against the
pandemic outbreak.

Freedom
of expression and the press have always been distinguishing hallmarks of any
democratic society. Without these fundamental liberties, a government which
purports to be of the people, by the people, and for the people cannot function
as such. The practice of democracy in a populous nation is best utilized
through the use of the representative system wherein some persons are appointed
or elected to make and implement policies on behalf of the citizenry. These
representatives need to know the wishes of their constituents. Likewise, the
citizens also need feedback on the performance of their leaders. The media
provides a bridge through which the needs of the citizens are communicated to
their leaders, and vice-versa. The media therefore plays a very crucial role in
the sustenance of any democratic society.

The
media can however be sabotaged to suit the selfish interests of a select few
through the dissemination of unverified or manufactured information also known
as fake news. These selfish interest may be fueled by either pecuniary gain or
some other political benefits. Fake news is often employed to shake the
citizens’ trust in their elected representatives by discrediting the
achievements and exaggerating the shortcomings of the government. This crafty
use of fabricated news is known to have toppled past governments. Nigerian coup
plotters understand the power of the media in controlling a government, hence
they tend to take-over the media houses simultaneously as power is seized from
the Head of State.

Following
the discovery of the index case of Corona Virus in Nigeria, several citizens
characteristically took to social media to re-affirm their absolute distrust
and loss of confidence in the efforts of the Buhari-led Federal Government to
combat the spread of the virus in Nigeria. Some political miscreants and
troublemakers saw the pandemic as an opportunity to score cheap political
points as they attempted to undermine public confidence in the federal and
states governments. However, as the Federal Government reeled out its plans for
the battle against the outbreak, some persons also seized the initiative to
resort to the incessant use of fake news to frustrate the Federal Government’s
effort in the battle against the outbreak.

Dissemination
of fake news has always been a threat to the existence of any society. The
threat is more pronounced in a democratic society, given the presence of a
near-absolute freedom of expression and the press. With the advent of the
internet and the social media, the threat has aggravated to even greater
proportions. Fake news was previously curtailed under military rule by
censoring the media houses and monitoring information disseminated therefrom.
Editors-in-chief of newspapers were held accountable for their publications.
Libel suits were common as aggrieved individuals whose interests had been
slighted by fake news merchants sought succor from the courts. The duty of care
on the media to verify information was very high due to fear of the
repercussions of peddling fake news. This fear however affected the quality of
news released, as news merchants were sometimes intimidated into disguising the
truth in order to please those in power.

In
the democratic era, the constitutional freedom given to the press to
disseminate information has made the battle against fake news challenging. The
internet and social media has further been utilized by fake news merchants who
benefit from the anonymity granted by the internet to continue their
news-fabrication activities. The Nigerian government has likened the effect of
fake news on our multi-ethnic and multi-religious society to a time bomb
waiting to explode. Several campaigns have been launched to curtail the spread
of fake news capable of undermining the peace and national unity of the nation.

The
battle against fake news is met with stiff resistance from the news merchants
who are often sponsored by opposition politicians benefitting immensely from
the societal unrest created by such fabricated news. They feed on the
gullibility of innocent citizens who accelerate the dissemination of unverified
speculations through the aggressive use of social media share buttons. This can
result in widespread anarchy and societal instability which consequently leads
to democratic overthrow and a return to authoritarianism. The 1966 coup which
ushered in military rule in Nigeria was preceded by such propaganda-induced
ethnic violence.

However,
given the wide-reaching effects of the Federal Government’s Lockdown Order, the
tactics employed by previous administrations in the battle against fake news
cannot succeed in the present socio-economic clime in the wake of the outbreak
for a number of reasons. Firstly, majority of the fake news being spread about
the virus, although being carefully crafted by mischief makers are not being
disseminated through the traditional means of media via which attribution can
be easily ascertained. The sponsors of the fake news have chosen to employ the
anonymity of the internet and the social media to spread such harmful and bogus
information which is almost untraceable to them. WhatsApp BC’s, voice notes and
videos have become a favourite weapon in the arsenal of fake news peddlers who
are assured that such nefarious publications cannot be traced back to them.

Another
unsavory factor which has seriously hampered the government’s efforts in the
fight against fake news in this pandemic era is the mass ignorance and
illiteracy which has threatened to envelope the Nigerian public. Sadly, this
ignorance which is fueled by rising panic appears to have transcended beyond
the borders of Nigeria, as citizens of other Countries have also begun to
construct conspiracy theories on the outbreak and spread of the virus. In the
first week of April alone, the United Kingdom authorities were confronted with
the task of disputing the relationship between Corona Virus and 5G technology.
The UK authorities who were not quick to combat this conspiracy theory sadly
suffered casualties as several 5G installations around the Kingdom were
attacked by ignorant citizens in a series of what they termed “reprisal
attacks” against the virus. The United States has also been faced with a
similar battle against several theories linking the cause of the outbreak to
biological and economic warfare by the Chinese. Although some of these theories
have neither been conclusively proved nor disproved in the home countries where
they emanated, snippets of these theories have crept into the Nigerian
territory and the Nigerian Federal Government has an added burden of disputing
these conspiracies whilst they persevere in their efforts to halt the spread of
the virus.

The
effects of the spread of fake news in Nigeria during the pandemic has been
massive. The chief result of fake news is loss of public confidence in the
government. This in turn leads to dire consequences such as willful disobedience
to the directives of the government on preventive measures of social distancing
and personal hygiene which can degenerate to a massive spread of the virus.
Another effect of fake news which is currently being felt in Lagos and Ogun
States is public unrest which has threatened the security of some border towns
along the two states. Some selfish Nigerians have inspired other citizens to view
the lockdown order with resentment, thus creating grave security implications.
The spate of armed robbery incidents and cult clashes which can be directly
linked to information about the lockdown order have tremendously tripled in the
affected states in the past weeks. Several mischief makers also thrive on
fueling further insecurity and panic in the affected areas by sharing false
reports of robbery attacks, thus frustrating the efforts of the security forces
who are tasked with the challenge of sieving genuine cries for help from false
alarms.

The
Nigerian economy is also suffering an indirect consequence of the activities of
fake news, as some indigenous and foreign businesses are the targets of
sponsored campaigns built on false information. It is not uncommon to see an
army of Social Media Influencers leading a harshtag campaign for the boycott of
a particular brand due to reasons not unconnected to the Corona Virus pandemic.
The extent of the effect of fake news on the Nigerian economy would be greater
appreciated in the post-COVID-19 era, when we would have greater flexibility in
assessing the extensive damage suffered by each sector of the economy.

The
best way to combat fake news is by simply disbelieving the information peddled.
This is possible when the level of literacy and political tolerance is high. A
joint effort by the government, digital and traditional media agencies is
needed to educate Nigerians not to believe everything they hear and read
without verifying the source of such information. The Federal Ministry of
Communications and Digital Economy led by the tech-savvy Dr. Isa Pantami has
been remarkable in its efforts to lead the frontline in discrediting fake news
spread digitally, however, it needs to take more proactive steps to educate
Nigerians on the activities of fake news merchants and the effect of fake news on
the war against the pandemic. Furthermore, media practitioners, especially
verified digital media operators, should resist the temptation of resorting to
unsubstantiated sensationalism in exchange for quick pecuniary gains. When
objective honesty is its’ watchword, the media plays a key role in the
sustenance of democracy. Social Media stakeholders also have a crucial role to
play in ensuring that their platforms are not utilized to share fake
information. This would albeit be difficult, but not unattainable, given the
near-absolute right to information which exists in the international community.
WhatsApp has announced plans to limit the use of its “Forwarding” functionality
to limit the spread of fake news which is primarily spread by forwarding and
copying on its platform. It is suggested that other Social Media Sites like
Facebook and Twitter take similar proactive steps which include but are not
limited to deleting posts which other users have identified to be fake,
banning/suspending known peddlers and distributors of fake information from the
use of their platform, until this outbreak is over.

The
war against the Corona Virus pandemic requires active participation from
everyone. With all hands on deck to battle the counter-attack of fake news, we
can eliminate the avoidable effects of fake news and make considerable wins in
the global war against COVID-19.

It's 10 Days to the Career Training for Lawyers, have you registered?
10 Things some police officers don’t want you to know | Legalnaija
Implementing SDG 5 (Gender Equality and Female Empowerment)