Disciplining Children In Nigerian Schools: To Flog or Not To Flog | Eberechi May Okoh 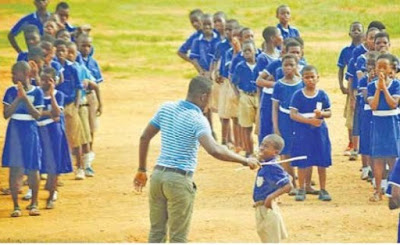 “There can be no keener revelation of a
society’s soul than the way in which it treats its children.”
Nelson Mandela

The role of children in any
society cannot be over-emphasized. Every culture in its own peculiar way, with
or without laws, by default, protects the young. The fact that the present
young population are going to be responsible for running society in the next
twenty to forty years, means that much attention should be paid to children’s
development. As expected, each society’s culture determines how its children
are treated. What might be acceptable to one society, might be completely
abhorrent to another. Two decades ago, flogging children in primary and
secondary schools in Nigeria was widely acceptable.

This was irrespective of
whether the school was public, private or a missionary school. Today, the
narrative is different. Even without the prompting of the government,
most private schools in Nigeria have already banned all forms of flogging or
hitting by teachers or other staff.  In
response, some teachers have lamented that the
absence of corporal punishment encourages pupils to be rude to them. Last year,
the Minister of State for Education, Chukwuemeka Nwajiuba, was reported to have
said that  the federal government would
no longer tolerate bullying in
schools, but he was not referring to corporal punishment.[1]
Furthermore, the Spokesperson of the Education Ministry, Ben Goong, emphasized
that the government did not ban corporal punishment.[2]

In Nigeria, corporal
punishments are widely acceptable to the extent that it is unthinkable that a
child will be allowed to grow without physical discipline. While the benefits
are often listed, little is known about the psychological effects on some
children and the healing process involved. Consequently, the culture of
disciplining children physically in the home transcends from the home to the
school and other public spaces. In some communities, an adult may discipline a
child for inappropriate behaviour in public and upon returning the child to the
parents with a report of what transpired, receive a warm welcome. It takes a
community to raise a child. Notably, Article
295 of the Criminal Code (South), article 55 of the Penal Code (North) and the
Shari’a penal codes in the Northern states confirm the right of parents to use
force to “correct” their children. Yet as we consider what is culturally
acceptable in our geographical space, it is important to take note that fortunately, or unfortunately, the world is
quickly shrinking into one global village with national leaders including
Nigerian leaders, signing treaties which will affect the lives of the citizens unbeknownst
to them. For this reason, the topic of disciplining young children in Nigerian
schools cannot be discussed without a consideration of the larger picture- global
practice. It is important to set out however that the consideration of what is
obtainable in other societies is not with a view to compare. The role of
children in the Nigerian society is so important that their affairs cannot be
decided on without recourse to the essence of who we are as a nation.

Currently, Europe and many
parts of South America practice prohibition of corporal punishment in all
settings. Russia, North America and Canada among others have achieved prohibition
in some settings while Nigeria, Botswana, Saudi Arabia and some others have not
fully prohibited corporal punishment in any setting.[3] Notably,
every continent at some point in their ancient history allowed corporal
punishment. In the UK for instance, in the last century, the issue of corporal
punishment in schools was often met with a perceived incompatibility with
Article 3 of the European Convention on Human Rights and Fundamental Freedoms.
While the Article prohibits torture and degrading treatment, in cases like Tyrer v
UK[4] and Costello-Roberts
v UK[5] the
issue of corporal punishment was considered in light of the Article. In
Costello-Roberts’ case, the court found that there was no infringement of
Article 3 in slippering a seven-year old child, but in Tyrer’s case, the court held
that the birching of a 15-year old boy was a violation of Article 3. In a
dissenting judgment in Tyrer’s case, Sir Gerald Fitzmaurice noted that Article
3 was not intended as a vehicle for penal reform. The European Convention was
post World War II and was concerned with the torture and ill-treatment
perpetuated by the Nazis and not necessarily corporal punishment.[6] However,
the creation of some fundamental rights had implications not intended by the
drafters. As chairperson of the drafting committee of the Universal
Declaration, Eleanor Roosevelt expressed concern that provisions outlawing
torture and ill-treatment might prohibit the practice of other things such as
compulsory vaccination.[7] These
concerns though voiced in a different context must lead us to ask questions such
as what the unintended effects will be if teachers are prohibited from
administering corporal punishment across all schools and all ages? This is in
view of the fact that Nigeria is a culturally different clime from the Western
World and cannot be seen to adopt Western procedures if not in the best
interest of the child and the society. However, while these questions persist,
the government continues to ratify international treaties and make commitments
which sooner or later, might completely wipe out corporal punishment.

In 1991, Nigeria ratified
the Convention on the Right of the Child (CRC). With the exception of some
northern states, many states have domesticated the CRC as state laws. The CRC
in Article 28(2) provides as follows:

“States Parties shall take all appropriate
measures to ensure that school discipline is administered in a manner
consistent with the child’s human dignity and in conformity with the present
Convention.”

It is also notable that the
Nigerian government is committed under the Sustainable Development Agenda
2030 and Africa’s Agenda for Children 2040. This year, the Global Initiative together
with Amnesty International Nigeria, is working on a project to bring law reform
on corporal punishment to the forefront of the Nigerian Government’s agenda. According
to the UN, corporal punishment is ‘any punishment in which physical
force is used and intended to cause some degree of pain or discomfort, however
light. It involves hitting (‘smacking’, ‘slapping’, ‘spanking’) children, with
the hand or with an implement – whip, stick, belt, shoe, wooden spoon, etc. It
can also involve, for example, kicking, shaking or throwing children,
scratching, pinching, burning, scalding or forced ingestion’.[8] In a 2019 report of the Global Initiative to End
All Corporal Punishment for Children in Nigeria, they noted that prohibition is
still to be achieved in the home, alternative care settings, day care, schools,
penal institutions and as a sentence for crime. According to them, these
provisions should be repealed, and prohibition enacted of all corporal
punishment by parents and others with parental authority.[9] If this
is achieved, corporal punishments will not only be prohibited in schools but
also in the home.

But as the international
community puts pressure on Nigeria to walk away from all forms of corporal
punishment and many private schools are abandoning it for lighter modes of
discipline, it is important to assess what corporal punishment in Nigerian
schools have done for us as a nation both positive and negative. Amidst reports
of many children (now adults) who appeared to attain to a well-rounded
development as a result of being flogged in schools, are reports of adults who
have scars of being victims of violent abuse at the hands of teachers. Evidence
on the topic shows support for both sides. Does corporal punishment have a
place in our society?  Has it helped our
society? Should it be retained or banned in schools? Have children been made to
endure violence and abuse at the hands of teachers? Do the benefits if any, outweigh
the harm?

[6]
Barry Phillips The Case for Corporal Punishment in the UK. Beaten into Submission
(1994) 43 The International and Comparative Law Quarterly No. 1 153.

Be A Guest Blogger On Legalnaija
J.N. YISAPATI - “Incompetence” of Court Processes without the NBA Stamp/seal
Legal Opinion on Whether the Comptroller General of the Nigerian Customs must wear uniform