A Review of the Doctrine of Competence- Competence | Chinedu Nwobodo 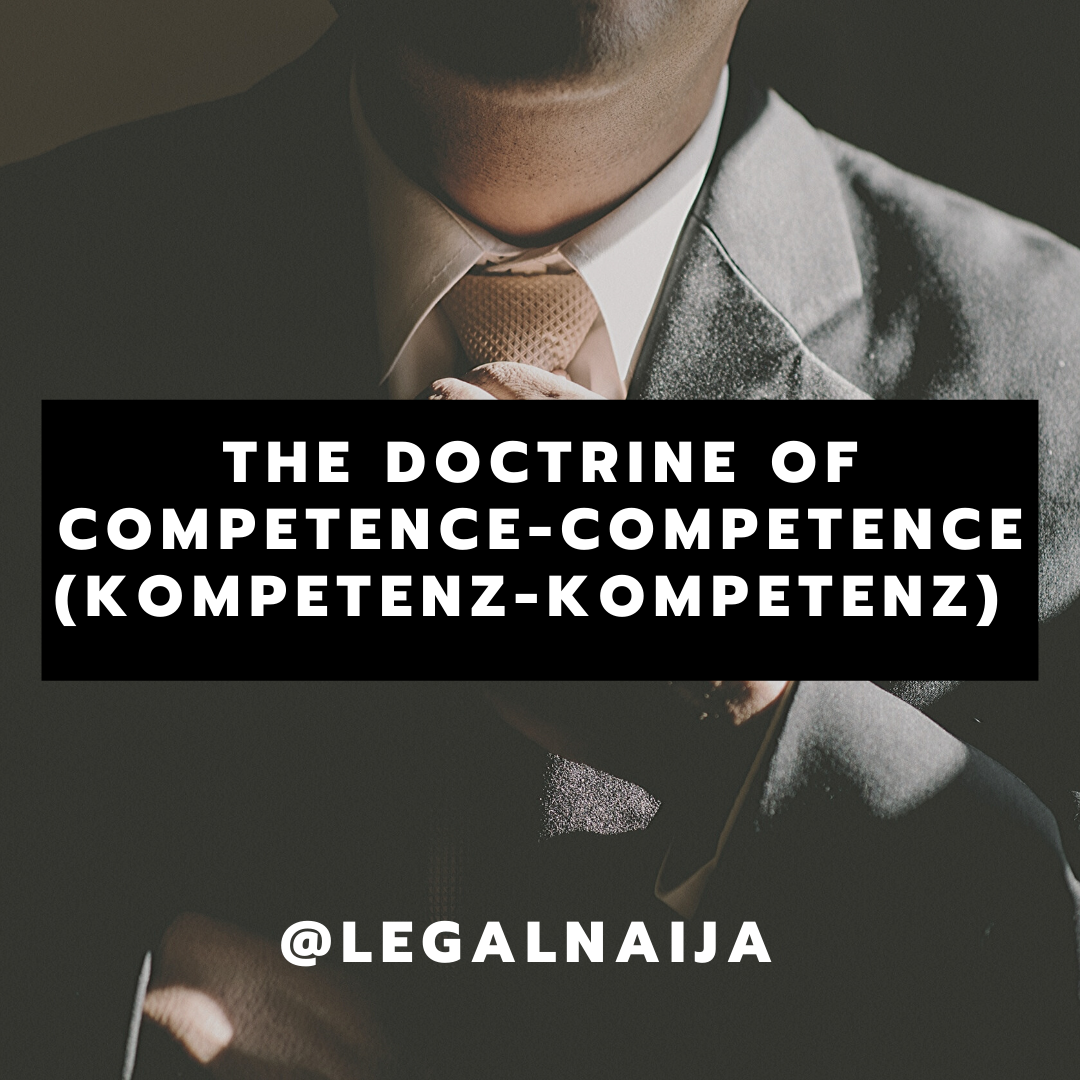 The Doctrine of Competence-Competence (Kompetenz-Kompetenz) is a unique and exceptional feature of arbitration. The doctrine is now a foundational principle of modern law of arbitration. It postulates that the arbitral tribunal (a sole arbitrator or a panel of arbitrators) has the power to decide on its jurisdiction when such is challenged by any of the parties to an arbitration proceeding.
There is a view that challenge on the ground of bias does not go to jurisdiction in order for it to come within the doctrine of competence-competence.
It is the writer’s opinion that challenge on the ground of bias goes to the issue of jurisdiction in arbitration taking into account its peculiarity. See Nigerian National Petroleum Corporation (NNPC) v. Total E & P Nigeria Ltd & 3 Ors, suit no.FHC/ABJ/CS/390/2018.
This means that the doctrine of competence-competence has its root in both sections 12(1) and 9(3) of the Arbitration and Conciliation Act (hereinafter referred to as ‘the Act’).
Hence, section 12 (1) of the Act is an extension of section 9(3) of the Act or vice versa.
This doctrine applies generally to an arbitration agreement entered into pursuant to the provision of a Statute. The foundation of this power can be found in section 12(1) of the Act.
This section provides thus:
‘An arbitral tribunal shall be competent to rule on questions pertaining to its own jurisdiction and on any objection with respect to the existence or validity of an arbitration agreement’
In support of the foregoing, Article 21 Rule 1 of the UNCITRAL (United Nations Commission on International Trade Law) Rules also provides that:
‘The arbitration tribunal shall have the power to rule on objection that it has no jurisdiction, including any objections with respect to the existence or validity of the arbitration agreement’.
In confirmation of similar provision in the ICC Arbitration Rules, the court in Dalmia Diary Industries Ltd. v. National Banks of Pakistan [1978] 2 Lloyd’s Rep 223, had this to say;
“We have no doubt, from the words used in those paragraphs, and from the general purpose and intents shown by the rules as a whole in respect of international arbitration, that the correct intention to be attributed to these rules is that a very wide jurisdiction is to be given to the arbitrator to decide on his own jurisdiction when that jurisdiction is challenged. We see no reason why, as a matter of construction of the words used, the court should be alerted to try to cut down the width of the intended meaning”
This doctrine of competence-competence will be more understood by making reference also to sections 8 and 9 of the Act.
Section 8 provides that any person who knows of any circumstances likely to give rise to any justifiable doubts as to his impartiality or independence shall, when approached in connection with an appointment as an arbitrator, forthwith disclose such circumstances to the parties.
The writer is concerned with what happens when such Arbitrator refuses to disclose such circumstances as mentioned above to the parties and there is a later challenge to his impartiality or independence.
Section 8(3) of the Act states grounds for such challenge thus:
“An Arbitrator may be challenged-
a) if circumstances  exist  that  give rise to  justifiable doubts  as  to  his impartiality  or independence;  or
b) if  he does  not  possess  the  qualifications  agreed  by  the parties.
Pursuant to section 9 of the Act the parties may determine the procedure to be followed in challenging an arbitrator. Where no procedure is determined under subsection (1) of this section, a party who intends to challenge an arbitrator shall, within fifteen days of becoming aware of the constitution of the arbitral tribunal or becoming aware of any circumstances referred to in section 8 of this Act, send the arbitral tribunal a written statement of the reasons for the challenge.
The interesting part of this section can be found under the subsection (3) which provides that:
Unless the arbitrator who has been challenged withdraws from office or the other party agrees to the challenge, the arbitral tribunal shall decide on the challenge.
Section 12(3) of the Act provides that a party is not precluded from attacking the jurisdiction of the Arbitrator by reason that he has appointed or participated in the appointment of an arbitrator and this ‘may’ be raised not later than the time of submission of the points of defence. However, such challenge may be admitted if it (the arbitral tribunal) considers that the delay was justified.

Subsection (4) further provides that the arbitral tribunal may rule on any plea referred to it under subsection (3) of this section either as a preliminary question or in an award on the merits; and such ruling shall be final and binding.

It is worthy to point out that section 34 of the Act provides that a court shall not intervene in any matter governed by this Act except where so provided in this Act.
Hence, the court will be reluctant to remove an arbitrator. See NNPC v. Total E & P Nigeria Ltd & 3 Ors (supra). This is because in the Act there is no replica of section 24(1) (a) of the Arbitration Act 1996 of England, which provides for the removal of an arbitrator by the court where circumstances exist that give rise to justifiable doubts as to his impartiality. See Cofely Ltd v. Bingham & Knowles Ltd [2016] EWHC 240 (Comm).
Flowing from the foregoing, the writer is basically concerned with where there is a sole arbitrator, and wishes to take a pause at this juncture to ask some questions that can naturally flow from the above provisions:
1. What happens when bias is the ground for the challenge of the jurisdiction of the Arbitrator and he rules that he is not biased and continues, or he deliberately refuses to rule on it as a preliminary question but delays it to the time of the delivery of the Award pursuant to section 12(4) of the Act?
2. In view of the fact that the parties to arbitration have certain liberties, can a party affected by the ruling renege from the proceeding having lost interest in its impartiality?
It is the writer’s view that the affected party has no readily available solution.
In the traditional court setting, whenever the impartiality of the Judge is in issue, there is usually an application to the Head of the Court seeking for transfer of the suit to another Judge. However, in arbitration there is a violation of the principle of Nemo judex in causa sua, since the Arbitrator becomes a Judge in his own case and his decision is final, pending when he hands down an Award (which can then be challenged on the ground of Misconduct pursuant to section 30 of the Act).
Notwithstanding that the doctrine of competence-competence appears to be a violation of one of the principles of natural justice (nemo judex in causa sua) and limits some liberties of a party to arbitration, it is however justifiable for the following reasons:
Firstly, the competence-competence approach is done to avoid additional costs and burdens often involved in standard court proceedings. The juridical basis for the support of this statutory provision is that the arbitration agreement of the parties is given preeminence over any other position, i.e., an arbitral tribunal is bound by the agreement of the parties. Arbitration is a mechanism arising out of the parties’ agreement. It is a well-known principle of law that volenti non fit injuria. Hence, since a party has voluntarily submitted or has agreed beforehand to submit his dispute to arbitration, he is deemed to have accepted all the incidents of arbitration.
Secondly, taking into account the option for the impeachment of an award on ground of misconduct under section 30 of the Act; a party who has been affected by the bias of the arbitrator could still apply to the court for the award so given to be set aside on that ground. This was given judicial celebration in A. Savoia v. A.O. Sonubi (2000) 12 NWLR (Pt. 682) 539.
Hence the jurisdiction of the court is not ousted from entertaining such application. The fact that a tribunal can determine its own jurisdiction does not give it exclusive power to do so and certainly does not prevent an enforcing court from re-examining the tribunal’s jurisdiction. See section 30 of the Act.
Thirdly, arbitration is a mechanism devised for easy settlement of dispute between parties to avoid going through the rigors of the conventional court. If the arbitrator is not given the power to entertain challenge as to his jurisdiction; it will defeat one of the advantageous features of arbitration which is for speedy settlement of disputes.
Thus, if such challenge is referred to court, it may take unnecessary time for the court to give its ruling as the court is faced with other pressing matters. The parties may at the end of the day spend more than they had anticipated as they may need the services of lawyers and solicitors.
It is observed that if arbitrators could not determine questions as to their own jurisdiction, a recalcitrant party could easily frustrate the parties’ agreement to have their dispute decided by arbitration or at least create considerable delay merely by contesting a frivolous application or the existence or validity of the arbitration agreement in court.
Further observation also shows that such a situation would seriously undermine arbitration as an effective means of private dispute resolution and deprive it of its attraction.
In conclusion, having regard to the above reasons and many more, the doctrine of competence-competence is a desirable one. Also, on the flipside, though it appears confusing when the doctrine is compared the principle of Nemo judex in causa sua, the express provisions of the Arbitration and Conciliation Act make it undesirable to invoke the strict application of the principle of Nemo judex in causa sua in this situation in arbitration matters.