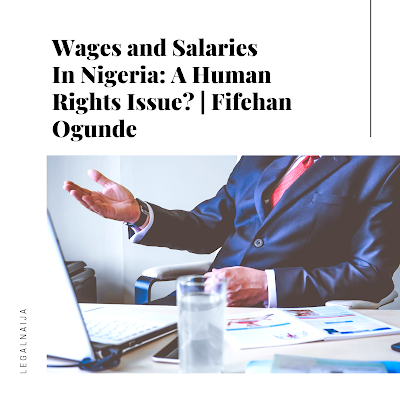 In April 2019, the Federal government signed into law the Miminum wage Repeal and Enactment Bill increasing the minimum wage across Nigeria from 18,000 Naira per month (US$50) to 30,000 Naira per month (US$83). Some have regarded this as good news for workers and labour unions in Nigeria are pushing earnestly for its implementation.
The discussion surrounding wages and salaries in general have always been considered an economic issue but there may be a case for a view that making it a fundamental rights issue could provide greater legitimacy for labour standards advocates.
Article 7 of the International Convention on Economic, Social and Cultural Rights (ICESCR) recognizes the right of everyone to ‘just and favourable conditions of work’ part of which include remuneration which provides workers with fair wages. This right is also recognized by the African Charter on Human and People’s rights. Remuneration for work under these instruments must also provide a decent standard of living for one and his family. Minimum wages under the ILO Convention are expected to take into consideration among others, costs of living and the needs of workers and their families. Average living costs for a single person in Lagos, Nigeria’s commercial capital is about 171,000 a month ($475) without rent and 622,000 is needed for the living expenses of an average family. Many internships in Nigeria offer a stipendiary pay of 40,000($146) per month or less. The average salary for skilled labour in Nigeria is 57,200 naira per month ($209) and the 25,200 per month for low skilled labour. An average salary which is less than a third of the living costs of a single individual is grossly insufficient for the maintenance of a ‘decent’ standard of living as envisaged by ICESCR, The International Labour Organization Minimum Wage fixing Convention 1970 and the African Charter on Human and People’s Rights. As bad as this appears, this may not be the worst. At different times, labour workers in Nigeria have embarked on industrial actions over unpaid salaries at federal government level. Unpaid salaries by certain state governments have resulted in more tragic consequences of government workers begging on the street. These are all in themselves violations of international law obligations by the Nigerian government at different levels and should be seen as such
Surprisingly, other than isolated strike actions by the Nigeria Labour Congress, there is limited advocacy on the need for pay to protect decent living standards and in any case, the body only acts with respect to public sector workers. Why is this so? One can only attribute the limited agitation to a lack of awareness as to the status of just and favourable conditions of work as fundamental rights. When human rights issues are discussed in Nigeria even by international organizations such as Human Rights Watch and Amnesty International, focus is normally directed towards issues such as police brutality, domestic violence and extrajudicial killings. Employment rights are also critical human rights that deserve protection by both government and non-government actors. Not only are they recognized as explicit rights under international law, they are inextricably linked to other fundamental rights.
Can we improve things? The answer to this is that improvement is difficult but not impossible. A vast majority of employers of labour are micro-businesses and SMEs in the informal economy with high running costs that are not matched by revenue. It is difficult to not only mandate private employers of labour to pay proper living wages but also enforce such mandates. Nevertheless, making fair wages a human rights issue brings into play matters of national, regional and international law and the added pressure may compel the government to take steps in this regard. Perhaps the best place to start is holding the government accountable with respect to the public sector. Where government fails to pay workers as at when due, redress of some sort should be available for workers, ideally in the courts of law. Private sector operators registered with the Corporate Affairs Commission should be placed under an obligation to pay workers fairly and equitably with fines and revocation of licenses possible sanctions for organizations that breach these obligations. This function must be diligently exercised by either the Corporate Affairs Commission or the National Salaries, Income and Wages Commission which is the body responsible for monitoring the compliance with minimum wage obligations at federal and state government level. This commission should also be responsible for monitoring living standards and making recommendations on an acceptable minimum wage based on decent living standards.
Monitoring for compliance with international standards should also extend to our student and graduate schemes particularly with respect to unpaid internships. 48% of young people in the UK have undertaken an unpaid internship and more than half of internship schemes in Europe are unpaid. As at 2016, About half of the 1.5 internships in the US were unpaid. Internship schemes are also on the rise in Nigeria and while specific data on unpaid in Nigeria may not be available, a number of companies offer unpaid internships. This does not change the fact as non-volunteer work without remuneration, unpaid internship may violate the right to just working conditions. For corporate organizations that offer internship schemes, pay must be commensurate with an individual’s educational and professional qualifications. It must also take into context current living standards as with other forms of full-time employment.
Wages and salaries are not just financial or economic subjects. They also raise human rights issues that must be recongized as such.

What You Need To Know About Filing A Compliant In The National Industrial Court Of Nigeria
The closure of businesses shows why Lawyers must embrace information technology in the workplace | A...
APPALLING DIVISION by Jacinta Obinugwu