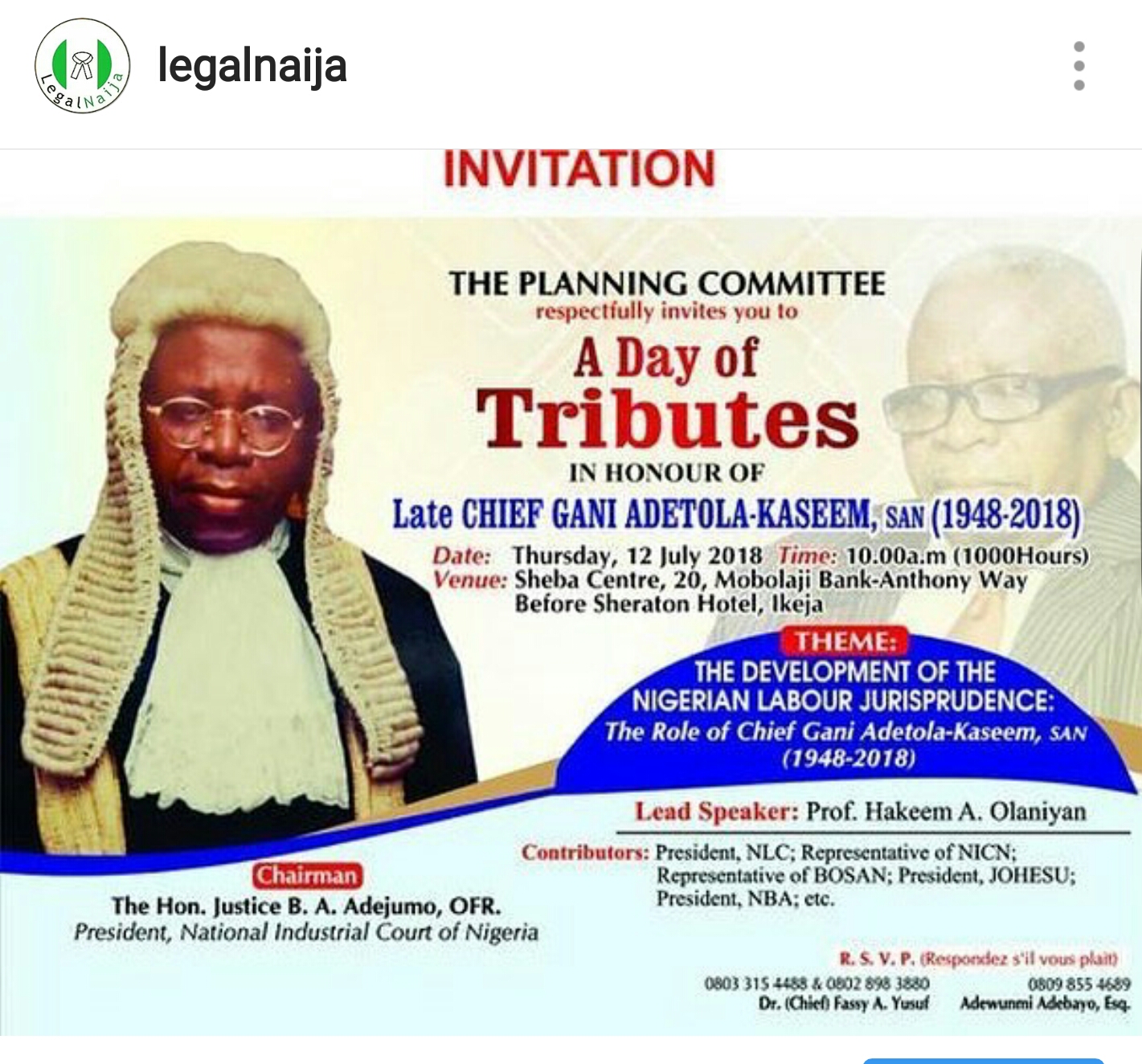 Yesterday 12th July, 2018 witnessed a landmark event, where high standing members of the Labour Union and officials at the Judiciary arm of the Nigerian Government spoke as one in paying tribute to a fallen hero, Chief Gani Adetola-Kaseem SAN.
Under the distinguished chairmanship of Hon. Justice B.A Adejumo, OFR, President, National Industrial Court of Nigeria, the 5-hour symposium titled ‘The development of labour jurispudence: the role of chief gani adetola kaseem san’, began smoothly with Prof. Hakeem A. Olaniyan as lead speaker for the event. Other discussants included Comrade (Dr) Ayuba Wabba, President, Nigeria Labour Congress, Seyi sowemimo SAN, Secretary, Body of Senior Advocates of Nigeria, representatives from the NBA, representatives from other sections of the Nigerian Labour congress and Ahmad Adetola-Kaseem Esq., son of the deceased.
Late Chief Gani was a devout and conscientious Muslim during his life time. He performed the holy pilgrimage to Mecca and Medina in 2002. He was a legal adviser to a number of Muslim communities and associations like the Somolu muslim community, Gbagada Muslim community both in Lagos and istijabah prayer group of Nigeria. He conducted a number of cases in courts for either persecution or defense of Muslim institutions and interests.

He was the lead counsel in the famous Abdulkareem v. Lagos State (2016) 15 NWLR (pt. 1535) 177 case, popularly known as the Lagos Hijab case. He represented the Muslim students’ society of Nigeria at the High Court, Court of Appeal and had already filled a brief of argument at the Supreme Court, before his death, with relation to the hijab case. He was a patron of the Muslim lawyers’ association of Nigeria, Lagos State branch and received a number of merit awards notably from Somolu Muslim community’ which also conferred on him the title of Turaki Adeen of Somolu and the league of Imams and Alfas of Ijebu Land in recognition of his selfless service to Islam.

According to the lead speaker “baba, during his life organized a significant number of seminars and workshop especially for medical practitioners whom he became familiar with by virtue of his being the counsel to the ‘medical and dental practitioners’ disciplinary tribunal’ for a long time. He got some of us interested in aspects of law and medicine as he prepared us to become resource persons in these workshops. Baba got resounding ovations for his seminars and workshop for medical and dental practitioners’, which owing to popular demand, were staged across the nation. Baba was also a highly respected figure amongst labour law practitioners, an area significantly traversed by him in his practice.  Baba ‘s relationship with labour and significant intellectual contribution to the evolution of National Industrial Court as the superior court original jurisdiction in labour and related matters is partly the reason why this event is holding. We are grateful to the organizers for repaying good with good.”