#TodayInPlenary Proceedings of the Nigerian Senate on 11th April, 2017 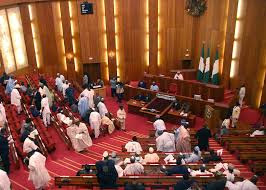 *PROCEEDING OF THE NIGERIAN SENATE OF TUESDAY 11TH APRIL, 2017*

Its a new Legislative day in the Senate of the Federal Republic of Nigeria. Senate President Bukola Saraki took the official prayer and led the Senate Leadership into Plenary.

Senate President Bukola Saraki announced the burial of late Senator Offia Nwali which takes place on the 25-28th of April and urged his colleagues to attend.

Senator Barau Jibrin raised a petition of wrongful dismissal of an officer from the Nigerian Police force.

The Petitions were referred to the Committee on Ethics and Privileges and to report back in 2 weeks.

Senator Sekibo cited a point of order thanking Senate President Bukola Saraki, Deputy Senate President Ike Ekweremadu and other senators who attended his birthday and book launch and also donated copies of the book to the National Assembly Library.

b. Petition from Insp. Solomon Ojo Dalley against the Nigeria Police Force (NPF) for unlawful Dismissal from the Force.

The Reports were Laid.

Senate President Bukola Saraki referred the confirmation of nomination for the appointment as members of the NDDC to the Committee on Niger Delta to report back in two weeks.

1. Harmonizing the different versions and copies of the constitution of the Federal Republic of Nigeria in circulation into one authetic whole by Senator Chukwuka Utazi.

-Mandate the Committee on Judiciary, Human Rights and Legal Matters to liase with the National Judicial Council, the Office of the Attorney General of the Federation and the Law Reform Commission to constitute a Law Review Committee to withdraw the copies of the different versions of the Constitution in circulation and authorize the printing and distribution of the authentic, consolidated Constitution of the Federation with the different alterations embedded where they belong to make the Constitution one whole document I guide the generality of the Nigerian populace and the international community.

“It is a straight forward motion”-Senator Aliyu Wamakko

“It is a straight forward motion and it’s on the path of government, we should find a way to harmonize”.-Senate President Bukola Saraki

2. Urgent need for the Nigerian Police Force and other Security Agencies to intervene in the increased rate of kidnapping in the Lagos East Senatorial District and secure the waterways by Senator Gbenga Ashafa.

i. Advise the Federal Government to direct the inspector General of police to immediately instruct the Commissioner of Police, Lagos State to immediately need up the strength of the task force already on ground in order to effectively secure all the affected creeks and communities.

ii. Advise the Federal Government to direct the inspector General of Police to immediately make available sufficient helicopters for aerial survillance and gunboats to the Marine Police department of the Lagos State Police Command to enable the State Command effectively tackle the activities of the militants.

iii. Urge the Army, Navy and other security agencies to assist the Nigeria Police in its quest to rid Lagos State, particularly the creeks in Lagos East Senatorial District of criminal syndicates making use of its waterways to perpetrate crime.

Senate President Bukola Saraki said it’s a straight forward motion and Senator Atai Aidoko added a prayer that security agencies should extend operation to Abuja and other parts of the country.

b. Petition from Hyacinth Ahuruonye against the Nigerian Police Force (NPF) for alleged Wrongful Dismissal from the Force.

c. Petition from Collins Chinonyerem Udeogu against the Nigerian Deposit Insurance Corporation (NDIC) for alleged Wrongful Dismissal from the Corporation.

d. Petition from Ex-Cpl. Kamal Haruna against the Nigerian Police Force (NPF) for alleged Unjust Dismissal from the Force

Senate resolved for the court to be allowed to handle various aspects of the case of former chairman NDLEA Mr. Ahmed Giade.

Senate resolved that the Nigerian Police should reinstate Hyacinth Ahuruonye and benefits be sustained.

Senate resolved that the dismissal of Mr. Collins Chinoyerem should be sustained as due process was followed.

Senate President Bukola Saraki thanked the chairman of the Committee and commended the hard work of his Committee .

“There are many other parts of the country which needs to be addressed,the committee should look into it and bring back the report”
-Senate President Bukola Saraki.

Senator Adamu Aliero raised a Constitutional Point of Order on the powers of the National Assembly and State Houses of Assembly on Local Governments. He spoke against the Bills to repeal the Local Government Act No 8 of 1976 SB. 365

Deputy Senate President Ike Ekweremadu spoke on the difference in Local Government laws in the North and the South from history way back  to 1972.

Senate President Bukola Saraki put the question to refer the Bill to Repeal the Local Government Act No 8 of 1976 to the Constitutional Review Committee.

Senators vote against Bill for an Act to Repeal the Local Govt Act No 8 of 1976.

The Nays had it!

2.A Bill for an Act to provide for the establishment of the Federal University of Education, Zaria, 2017 (SB.400) by Senator Jibrin Barau.

Senator Samuel Anyanwu seconded the Bill and Senate President Bukola Saraki referred the Bill to the Committee on Tertiary institution and TETFUND.

3.A Bill for an Act to establish the Nigeria Arabic Language Village, Ngala, 2017 (SB.386) by Senator Baba kaka Bashir Garbai.

Senator Ibrahim Gobir supported the Bill and Senate President Bukola Saraki referred the Bill to the Committee on Tertiary institution and TETFUND .

4.A Bill for an Act to establish the Nigeria French Language Village, Badagry, 2017 (SB.387) by Senator Gbenga Ashafa.

Senator Dino Melaye said We must promote the bill instead of using dollars to study to learn French in France, we can learn it here. He suggested that Senate President Bukola Saraki should enroll in the school and support this Bill, and stated that General Olusegun Obasanjo lost the seat of the Secretary General of the United Nations because he could speak only one internationally recognized language.

Senate President Bukola Saraki referred the Bill to the Committee on Tertiary institution and TETFUND and to report back in four weeks.

The senate Leader moved that other items on the order paper be stood down to another another Legislative day.

Senate Leader Ahmed Lawan moved for the adjournment of Plenary to the next Legislative day. Minority Leader seconded.