THE YOUNG LAWYER; FRUSTRATIONS OF PUPILAGE 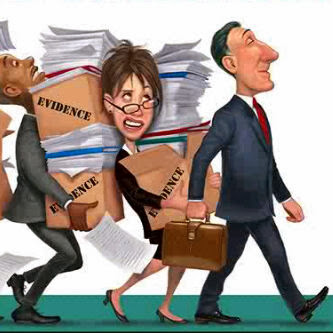 I’ve had it in mind to write an article that concerns my primary constituency as it were for quite some time now, however I’ve dilly-dallied about how appropriate some of my thoughts may sound “on this topic”, about what qualifies me to write this (considering this is my third year of legal practice), and most of all whether or not I’m absolutely certain about some of the opinions I intend to share here. The same things that seem to be my weakness are the exact reasons afterall why I should give this a shot, if not for more than the little joys criticisms afford. I am one of you, that’s all the qualification required of me to write this, the remaining I throw in the pocket of time, to prove if I am right or otherwise.

Law is a noble profession, it is a profession that sets you apart from the educated, the dignity, the prestige,
the knowledge, the fraternity, history, tradition, culture and a cumulative of minute practices that cannot be conjectured in words. It’s simply the lifestyle. This is what most of us signed into. The Crane, Pool & Smichdt type firm or the Harvey Spectar type transactions with a Mike Ross to compliment it.Unfortunately, what we were not told was that the real/actual world of practice isn’t as smooth as Hollywood or our lecturers from university would have us believe. I’ve interacted with loads of lawyers in my bracket and the patterns have become mostly predictable.

The average young lawyer is either complaining about his salary and how ridiculously small it is, or about how his boss is a screamer or how he just can’t wait to leave his current firm to one of those “BIG” firms and yes the crazy work hours and how he has to close from work when most people are already in bed to navigate his way home without a car. The I’ve had enough’s, I just can’t stick it anymore, I’m lighting out on my own or I’m done with litigation. Every young lawyer has been here.

We live in an age and time where everything is sacrificed on the altar of speed far more than quality, a generation that would rather have the Gold than observe the refining process that converts the raw metal to albeit the most coveted/priced material. The prevailing societal imbalances that paint the fast lane as the only way to success rather than the growth process.Law is not like most other profession’s, what we are called to do is to fix people, to handle human lives and by that I mean tending the psychological and emotional challenges of people.

The mistakes, the errors, the failures, the pressure from perfectionist bosses, the lessons learnt, the little victories, the pupilage and tutelage. The patterns observed from the various cases that you will come across while under pupillage, afterall, ‘EXPERIENCE’ is just being familiar with consistent sequences that can be observed in various patterns. The things you will not easy find as a young lawyer out there on your own, the cross ventilation of ideas and strategy with colleagues in the same office, these are the things that make the lawyers lawyer. Don’t get bothered when you see other people succeed because as long as you remain, hardworking, ready to learn, disciplined and loyal to your dreams, your success is guaranteed. Remember that the race is long, however in the end it’s only with yourself.

I’d paraphrase some excerpts of a discussion I was privileged to have with Mr. Alex Mouka, the current Chairman of the Lagos Branch of the NBA after an event at the Intercontinental Hotel, Victoria Island Lagos. He told me of two experiences that he had carried on with for so long. He said while he was on attachment, he was told by the Head of Chambers of the firm he was attached to that “if you are half good as a lawyer, you will make a living”. The other was what an older lawyer in the only firm in which he eventually worked told him, that “the life of a lawyer is like an arc, it starts slowly at point A and it rises gradually, peaks at some point and then gradually descends the other side of the arch due to age, and diminishing energy levels.

While I do not write this to denigrate the dexterity and courage of my learned friends who have taken the bold step to go it alone, some from day one, I only write his piece to encourage many others like me who have decided to go through the ‘pupilage’ phase. The focus is to build a formidable foundation, tested and sure. Remain resilient, remain teachable, remain confident, remain loyal and remove your focus from the money, think long term, the money will eventually come.

In conclusion, should it then be true that “if you are half good as a lawyer, you will make a living”, the question I have for you is, how good do you intend to be as a Lawyer? The choice is yours.