The Need To Understand The Constitutional, Political And Policy Contexts Of Executive Powers 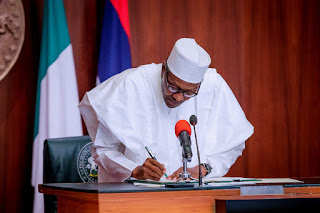 Man’s increasing thirst
for power since the dawn of time is the premise for which Separation of Powers
and a system of Checks and Balances is ingrained in the roots of democratic
governance. If power corrupts, then absolute power corrupts absolutely. According
to Charles de Montesquieu, “when the legislative and executive powers are
united in the same person, or in the same body of magistrates, there can be no
liberty”. The essence of Democracy, the Rule of Law and the security of
Human rights is to give man a good life and liberty against arbitrary or
unrestrained exercise of power. If powers are not definitely shared, the path
to tyranny is not far-off.

The concept of
separation of powers stands frontward in the interaction of the three branches
of government; the executive, the legislature, and the judiciary. The Nigerian
constitution captures the doctrine of separation of powers to prevent one arm
of government, specifically the executive, from becoming excessively powerful,
enough to destroy the system. Under the 1999 Constitution of the Federal
Republic of Nigeria, federal legislative power is vested in the National
Assembly, while executive power is vested in the President and the judiciary with
the power to interpret laws, by virtue of Sections 4, 5 and 6 respectively.

In performing his
executive functions, the President may issue orders to agents and agencies of
the executive branch in respect of a project or programme. These orders may set
out government policies, issue directives or command action relating to
functions of the executive arm. An order issued by the President becomes rather
controversial when it purports to make law . There is no express
mention of executive orders in the constitution, howbeit, executive orders are
an offspring of constitutional development, especially, in the history of the
development of presidential power in the United States. It is usually
following the presidential instinct to ‘execute and maintain’ the provisions of
the constitution .

The President’s power
to issue executive orders raises the problem of lack of clarity in separation
of powers. If executive orders have the force of law, it goes without saying
that Presidents have the power to make laws by issuing executive orders.
However, there is a counterbalance considering that this power is also
controlled and checked by the Judiciary. Executive orders are advantageous
because they are required to fill in the gaps in legislations creating
executive agencies. A good instance of such
executive order would be Executive Order 5, issued by the President relating
chiefly to promotion of Nigerian content in public procurement of goods and
services. The use of executive orders is also necessary in occasions of
regulatory contradiction and uncertainty in Nigeria .

Like legislative
statutes, executive orders are subject to judicial review and may be overturned
if the order lacks support by statute or the Constitution, if the order demands
an action that will be illegal, or if the order contravenes one or more doctrines
of democracy. A critical case on Presidential executive orders is Attorney General
of Abia State & ORS V. Attorney General of the Federation [2003] 4 NWLR (PT
809)124. In this case, the Supreme Court considered the validity of the
promulgation of the Revenue Allocation (Federal Account, Etc) (Modification)
Order (Statutory Instrument No. 9 of 2002). Belgore, JSC held that the promulgation
order was indeed constitutional and valid seeing as the then President of the
Federal Republic of Nigeria, Chief Olusegun Obasanjo, acted pursuant to Section
315 of the 1999 Constitution. Courts, however, do not readily invalidate
executive orders and the legislature cannot impose a general prohibition on the
use of executive orders, as noted by the Supreme Court in Attorney General of
the Federation v Abubakar [2007] 10 NWLR (Pt 1041)1.

Executive Order No.2,
on the Promotion of local content in public procurement by the Federal Government.
This order’s mischief is to grant preference to local manufacturers of goods
and service providers in their procurement of goods and services.

Executive Order No.3,
for the Timely Submission of annual budgetary estimates by all statutory and
non-statutory agencies, including companies owned by the Federal Government. This
order addresses the delay in the passage and assent of National Budget
occasioned by the late preparation and transmission of budget estimates by Ministries,
Agencies and Departments (MDAs), with the 2016 and 2017 budgets as befitting
reference points.

Executive Order No.4,
on the Voluntary Assets and Income Declaration Scheme (VAIDS), to increase the
level of Tax awareness and compliance, widen the tax net, and reduce incidence
of tax evasion in the country. Also, to offer amnesty until March 31, 2018 (later
extended to 30 June, 2018) to tax payers (individuals and corporate bodies) who
have defaulted in their obligations in the past.

Executive Order No.5,
to improve local content in public procurement with Science, Engineering and Technology
components. The executive order is expected to promote the application of
science, technology and innovation towards achieving the nation’s development
goals across all sectors of the economy.

Executive Order No.6,
on the Preservation of Suspicious Assets connected with corruption and other
relevant offences. This order sought to fight corruption by curtailing certain
liberties and fundamental rights of Nigerians .
The order prevents persons guilty of corruption from continuously holding and
controlling asset acquired from proceeds of corruption.

Executive Order No.10,
which merely affirms the financial autonomy already donated to State
Legislature, Judiciary, and by the Constitution, strengthens them as
institutions, and makes them truly independent from the suffocating grip of
State Governors. This ensures transparency, accountability and responsibility
in government; broadens and deepens the democratic space; and signposts the
much-desired restructuring and power devolution

These executive
orders do not escape criticisms. Particularly, President Buhari’s Executive
Order No.6 raised controversies as to its constitutionality and validity seeing
as it invalidates the rights to property guaranteed in Sections 43 and 44 of
the 1999 Nigerian Constitution. According to the President, the order aims to
“restrict dealings in suspicious assets subject to investigation or inquiry
bordering on corruption in order to preserve such assets from dissipation and
to deprive alleged criminals of the proceeds of their illicit activities which
can otherwise be employed to allure, pervert and/or intimidate the
investigative and judicial processes” .

Indeed, democracy
cannot flourish in the dearth of clear and precise separation of powers and an
operative system of checks and balances .
This is a challenge for the legal profession and the Judiciary to understand
the constitutional, political and policy contexts of the exercise of executive
power in order to prevent the executive arm from exceeding its power limits,
safeguard human rights and liberties, and save the democratic society that is
Nigeria.

9.
Dayo, Adu and Ridwan, Oloyede. President of Nigeria Signs Executive Order 6
of 2018 on the Preservation of Assets Connected With Serious Corruption and
Other Relevant Offences. 2018.