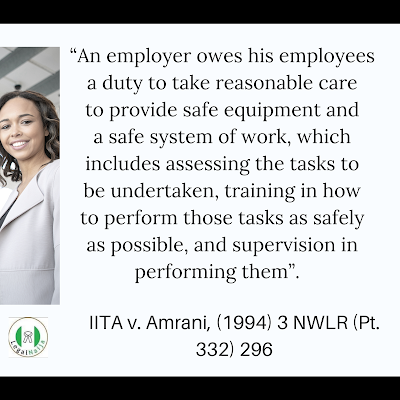 Introduction
In Nigeria, the law requires all employers
to take responsibility for preventing workplace injury and disease. As a
result, employers must take every precaution reasonable in the circumstances
for the protection of their workers. This usually entails the maintenance
of a healthy and safe work environment; provision of hazard information, proper
safety equipment, training and competent supervision.

Brief facts
In the case of Henry
Ihebereme v. Hartland Nigeria Limited, (Unreported Suit No.
NICN/ABJ/172/2018, the judgment of which was delivered 23 January 2020) the
Claimant sued
his former employer to demand compensation for the sum of N250 Million as
“compensation for the permanent loss of the use of his hand, for pain and
suffering, and for loss of enjoyment of life”. The Claimant had been employed
as a bricklayer, with responsibilities, which included moulding of concrete slabs
and their removal from the point of moulding to the point of the site where it
is needed and such related tasks as the foreman may direct. While at work the
Claimant was injured by a forklift that was being operated by his co-employee,
leading to the loss of his arm. Specifically, the Claimant suffered ‘multiple
fractures of the 2nd, 3rd and 4th middle phalanges of the left hand’. He was
first treated at a medical facility at the instance of the Defendant.
The
Defendant, however, contended that the Claimant was injured when he negligently
climbed the forklift, without authorization. The Defendant also contended that it
offered medical treatment to the Claimant, but that the Claimant deliberately
refused, neglected and failed to proceed for further medical treatment instead
insisted on collecting Ten Million Naira as compensation from the Defendant.
The law
In
its judgment, the National Industrial Court examined the merits of the
Claimant’s case against the Defendant, which was based on the tort of negligence.
The Court pointed out that duty, breach, causation, and damage are the elements
which together make up a successful negligence claim. By these requirements,
the tort of negligence relies on the blameworthy nature of the defendant’s
conduct for success. In other words, for a claimant to succeed in a negligence
action, he must prove that the defendant was in fact negligent, that is, he
failed to take that degree of care which is reasonable in all circumstances of
the case or he failed to act as a reasonable man would have acted. Then if the
defendant owes a duty of care, his negligence becomes breach of that duty. The
resultant damage on the claimant would then be actionable. Even here, there is
still the possibility that the claimant may not recover (or only partly
recover) against the defendant given the limiting/control devices of remoteness
of damage, contributory negligence and voluntary assumption of risk. In other
words, a defendant may owe a duty of care, may breach that duty of care, for which
the claimant suffers resultant damage, and yet not be liable or be only partly
liable if the damage is too remote, or the claimant contributed to the injury
or the claimant voluntarily assumed the risk in issue.
The
Court in this case had no difficult coming to the conclusion that the Defendant
owed the Claimant a duty of care given the proximate relationship between the
two, and the fact that the claimant was injured in the course of working for
the Defendant, indicated that there was a breach of the duty of care, and
resultant damage. The English case of Smith & ors (FC) v. The Ministry of Defence (2013)
LPELR-17965(UKSC); Suit No: [2013] UKSC 41, held thus: “An employer owes his employees a duty to take reasonable care to
provide safe equipment and a safe system of work, which includes assessing the
tasks to be undertaken, training in how to perform those tasks as safely as
possible, and supervision in performing them”. This position is reinforced
by IITA v. Amrani, (1994) 3 NWLR (Pt. 332) 296 which held that the standard of the master’s duty towards
his servant is to see that reasonable care is taken; the scope of that duty
extends to the provisions of safe fellow servants, safe equipment, safe place
of work and access to it and a safe system of work.
The
earlier authority of Western Nigeria Trading Co. Ltd v. Ajao (1965) All NLR 524
(followed in recent cases like Ola Suleiman v. Hongzing Steel Company
Limited unreported Suit No. NICN/LA/73/2011, the judgment of which was
delivered on 26th February 2015) is
no less instructive: an employer’s duty at common law is not only to provide
goggles (safety equipment), but also to see to it that they are used. The case
of Green Pack Rubber Ind. Ltd v. Ossai (2004) 2 FWLR (Pt. 194) 668, on its part stressed that when a statutory duty is imposed
on an employer but not also on the workman who is injured and there is breach
of that duty which is a cause of the accident to the workman, the employer will
be liable subject to an apportionment for contributory negligence. The case stated
further that the employer will be completely exonerated if the workman, having
been given appropriate equipment and instructions, disobeyed those instructions
or did some deliberate wrongful act which breaks the causal connection.
Employee duty to mitigate damage

In
the case of Henry
Ihebereme v. Hartland Nigeria Limited, which is under review, the Defendant acknowledged via correspondence that the Claimant
was its sailor, and in the normal course of his duties, was injured when the
wire rope holding a snatch block broke and a block fell on him. The Court
therefore had no difficulty in concluding that the acknowledgment of negligence
on the part of the Defendant resulted in the injury that the Clamant suffered.

However,
in inadvertently admitting negligence, the Defendant contended that the Claimant
aggravated the state of his injury by discharging himself from the hospital
even when the hospital advised against this. To the defendant, the decision to
discharge himself and go to bone healers was completely that of the claimant
and his relations contrary to the advice of the hospital. The Claimant did not
contradict this piece of evidence. As a result, the Court found and held that it
was the duty of the Claimant to mitigate the damage; he cannot recover damages
for an aggravation or prolongation of his injuries which is due to his neglect
or willful default; such unreasonable conduct being novus actus interveniens.
(i.e, an intervening unforeseeable event that occurs
after the defendant’s negligent act and operates to precipitate or worsen the
plaintiff’s loss).
The
Court made reference to two older case law authorities on the doctrine of novus
actus interveniens. The first was the case of Ekwo v. Enechukwu (1954) 14 WACA 512.
The plaintiff’s hand in this case was seriously injured as a result of the
negligent fixing of a seat belt in the defendant’s lorry. Immediately after the
accident, a servant of the defendant offered to take the plaintiff to a
hospital for medical attention, but the plaintiff refused, preferring instead
to consult a native doctor. Seven days later, the plaintiff did go to a
hospital, by which time the hand had become septic and gangrenous and so had to
be amputated. The doctor who attended to the plaintiff in the hospital
testified that the amputation was the result of the wound becoming septic, and
he was of the opinion that had the plaintiff come to the hospital immediately,
he might have been saved from amputation and the fracture would have been
cured. The Court held that the plaintiff did not act unreasonably in consulting
a native doctor instead of going immediately to a hospital.
The
second case is Mange v. Drurie (1970) NNLR 62. Here, the Plaintiff was riding a bicycle when he was knocked
down and suffered injury to his leg as a result of the careless driving of a
lorry by the Defendant. He was immediately taken to the hospital by the Defendant.
However, before treatment was complete and against medical advice, the Plaintiff
discharged himself and did not return to the hospital for two days. During this
two-day period, the leg became infected and so had to be amputated. The Plaintiff’s
claim for damages for loss of the leg was rejected by the Court.
The
Court applied the cases of Ekwo v. Enechukwu and Mange v. Drurie in holding that the Claimant in the instant
case failed to mitigate his damage and could therefore not recover against the
Defendant for the aggravated injury.
Conclusion
The law on employers’ liability for injuries that
occur to employees in the course of employment ensures that no employee who is
injured in the course of employment goes without compensation for the
injury.  It provides the employee with choice of legal regimes to utilize
for the purpose of seeking compensation.  An employee can either:
1.      Sue
his employer in negligence founded on the breach of the common law duty of
care;
2.      Sue
the employer where injury occurred due to a breach by the employer, of a
statutory duty, for example, as contemplated by the Factories Act.
3.      When
the employer is not blameworthy in negligence, sue an occupier of premises for
negligence founded on Occupiers’ Liability.
4.      Sue
another employer for injury or loss sustained by an employee, which is caused
by the employer’s employee in the course of his employment; in which case the
liability is vicarious;
5.      Seek
compensation under the Employees’ Compensation Act, for injuries which occurred
in the course of employment, either by accident or as a consequence of the
employment.
The choice is usually that of the Claimant’s.
Each regime has its pre-conditions to be met before the Claimant can be
entitled to the claim.  Where the employee is unable to fulfil the
conditions, then he may lose a deserved compensation. 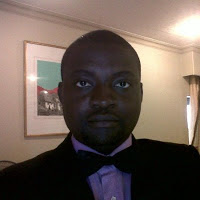