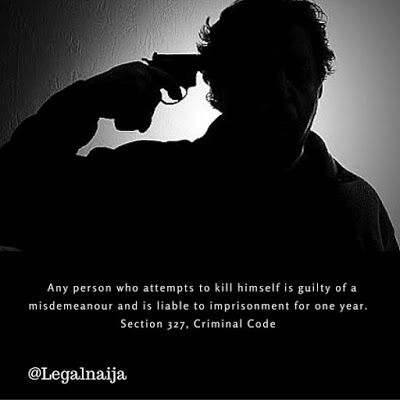 Your suicide attempt had better be successful

We
are all supposed to have our individual freedoms right?To do what we want and
how we want, as long as it does not hurt any other person. That’s what our
basic human rights are based on. But the above position isn’t true, if not,
being homosexual will not be an offence in Nigeria and we will be able to kill
ourselves. That’s right, suicide is a crime. I wonder why though, it’s not like
I am killing someone else.
According
to Section 326 of the Criminal Code Act, CAP C38, LFN 2004:
Any
person who –
1.
Procures another to kill
himself; or
2.
Counsels another to kill
himself and thereby induces him to do so, or
3.
Aids another in killing
himself;
Is
guilty of a felony and is liable to imprisonment for life.
Also
Section 327, states that any person
who attempts to kill himself is guilty of a misdemeanour and is liable to
imprisonment for one year.
Obviously,
the law seeks to prevent people from committing suicide based on moral grounds,
however, one question that bothers me is, assuming someone wants to kill
himself, why will locking the person in a jail cell be a deterrent, he or she may as well try again while in his prison cell. I believe the
law should have made some provision for rehabilitating such a person and giving
the person another positive outlook to life.
Anyway,
that’s jurisprudence for another day, for now, my suggestion to you is, if you plan to
commit suicide, ensure its successful or else you may be going to jail.
Adedunmade
Onibokun, Esq.
@adedunmade
dunmadeo@yahoo.com