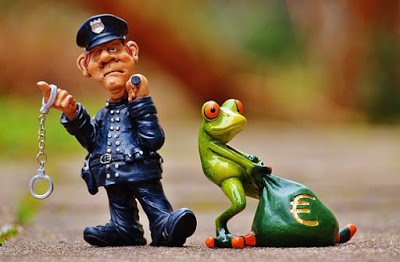 “It is important for me to pause and say here
that the powers conferred on the EFCC to receive complaints and prevent and/or
fight the commission of Financial Crimes in Nigeria pursuant to section 6(b) of
the EFCC Act does not extend to the investigation and/or resolution of disputes
arising or resulting from simple contracts or civil transactions in this
case… Alas! The EFCC is not a debt recovery agency and should refrain from
being used as such[1]”.
Per Sidi Dauda Bage, J.S.C
The
Supreme Court recently delivered a judgment[2] which touched, among other things, on the role of
the Nigerian police and other law enforcement agencies in debt recovery.

The
history of the case dates to a banking transaction that went sour between a
commercial bank and its customer. The bank had granted a loan to a company,
guaranteed by the Managing Director (MD) of the company. The loan was secured
by a lien over original payment vouchers, debentures over the floating assets
of the company, a legal mortgage over the property of the guarantor and a lien
over three Fiat trucks and three Fiat tractors. Over time, the company and its
MD suspected the bank was charging excessive interests on the account and
employed a banking consultant to audit the account.

The consultant found that
excess charges were indeed levied on the company’s account and wrote the bank
asking for a refund of the excess charges. The bank disagreed with the
consultant’s findings and the matter was referred to the Chartered Institute of
Bankers’ Sub-Committee on Ethics and Professionalism for arbitration. While the
matter was pending before the Committee the bank made a demand on the company
and its MD for payment of the debt and interest. It subsequently reported the
company to the Financial Malpractices Investigation Unit of the Nigeria Police
Force, C.I.D. Acting on this report, policemen arrested and detained the MD of
the company and did not grant him bail until cash and cheque payments totaling
N2,000,000 (Two Million Naira) were paid to the bank.

The company and MD
subsequently filed a fundamental rights enforcement action at the Federal High
Court. While the suit was pending, the bank made a further complaint of bank
fraud and diversion of depositors’ money to the Economic and Financial Crimes
Commission (EFCC). Based on this complaint, the EFCC sent an invitation letter
to the company and its MD. The latter promptly filed another fundamental rights
enforcement suit against the bank and the EFCC seeking a declaratory relief
that the invitation by EFCC was unlawful and a violation of the MD’s
fundamental right to liberty and dignity of his person and a continuation of
the harassment by the bank. The trial court dismissed the suit of the company
and its MD. On appeal, the Court of Appeal held that the multiple complaints by
the bank to different law enforcement agencies amounted to harassment and a
violation of the MD’s fundamental human right. Dissatisfied, the bank appealed
to the Supreme Court. The Supreme Court upheld the decision of the Court of
Appeal.

The
Supreme Court considered the statutory powers of the EFCC and noted that such
powers do not extend to investigating disputes which arise from simple
contracts or civil transactions. It further held that the EFCC must scrutinize
petitions and advise complainants on the appropriate route to resolve their
disputes and refrain from being used as a debt recovery agency. It also noted
that the Police ought not to have allowed themselves be used to recover any sums
from the MD in exchange for bail. The court held that the bank’s remedy for
default in repaying a loan was to write a demand letter to the company and
subsequently invoke its power of sale under the mortgage deed. It cautioned
that detentions by law enforcement agencies over purely commercial disputes
could amount to bad publicity for future investors.
This
case has revisited the issue of the involvement of law enforcement agencies in
simple contracts. It is pertinent to note that the present case was adjudged to
be a pure commercial transaction. The Supreme Court has by this decision
provided clarity that the role of law enforcement agencies in society does not
extend to resolving commercial disputes where no fraud or criminality can be
established.

There
exists a distinction between a commercial dispute and a criminal conversion of
funds. A cursory look at the Criminal Code Act[3] will reveal that offences related to cheating and
obtaining by false pretense must be preceded by the mens
rea
of “intention to defraud”. Therefore, where a person with intent to defraud,
obtains money by false pretenses, he/she would be accused of having committed a
crime. A simple contract that results in a debt or a dispute as to the measure
of indebtedness between two contracting parties is a purely civil matter and
ought to be resolved by the civil courts or through alternative dispute
resolution.

Persons
reporting matters to the Police or other law enforcement agencies must take
cognizance of their powers. The general duties of the Police are:
“The police shall be employed
for the prevention and detention of crime, the application of offenders, the
preservation of law and other, the protection of life and property and the due
enforcement of all laws and regulations with which they are directly charged,
and shall perform such military duties within or without Nigeria as may be required
by them by, or under the authority of, this or any other Act.[4]”