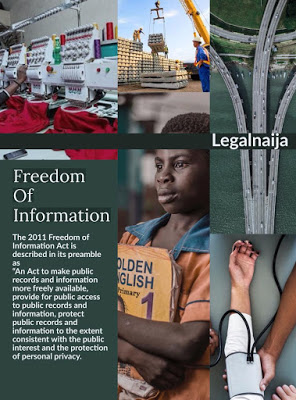 Exploring The Freedom Of Information Act, 2011 As A Tool For Holding Government And Public Institutions Accountable | By Henry Chibuike Ugwu

INTRODUCTION:
How much does a Nigerian
senator earn as monthly salary? What are the allowances such a senator is
entitled to? How many Nigerians know the amount of money spent on the health of
the President annually? Can you state with certainty the total amount of money
recovered from corrupt public officials so far by the Economic and Financial
Crimes Commission (EFCC)? What is security vote and how much is a Nigerian
governor given as security vote? Are Nigerians afforded a breakdown of the
expenditures of such security votes by Nigerian governors? Sadly these are some
of the many questions that Nigerians cannot answer about the government and its
agencies. They are questions that require many months of exercise, prayers and
strategy to commence the voyage of discovering their answers irrespective of
the fact that they involve public servants and public funds, and which
information ordinarily should be easily accessible by all Nigerians.
The issue of holding the
government accountable to Nigerians with regards to how its arms and agencies
disburse and use public funds, is very key if all Nigerians are to enjoy the
dividends of democracy; and witness the prudent application of our resources
for economic and infrastructural growth of the country.
More so, Nigerians must be
able to demand from every public institution, information bordering on the
workings and finances of such institutions and have these information supplied
to them with dispatch. This should be the beauty of practicing a democracy- a
system of government where the people, as the sovereign, elect political
leaders to supervise public institutions and disburse public funds on their
behalf.
With the kind of powers
and obligations entrusted to government and its agencies by the sovereign- the
people, it is, to say the least, extremely important that the people hold these
officials of government accountable for all their activities in either the
government or in public service.
Officials of the Nigerian
government cannot be held accountable if the government is run by stealth, or
its activities, policies, expenditures, etc, are unascertainable by the people.
This is where the Freedom of Information Act (FOIA) 2011[1], comes in very handy.
Prior to the enactment of
the FOIA, it was virtually impossible for ordinary Nigerians and
Non-governments Organisations to demand from public institutions any
particulars of their activities and secure the information sought. The people
were incapable of ascertaining what their monies were used for, the particulars
of disbursement and expenditure of public funds and the manner and basis in
which recruitments for public service were conducted. We were left at the mercy
of the media which in many circumstances provided us with inadequate or
unreliable news.
OVERVIEW
OF THE ACT:
Section 1 of the FOIA
establishes the right of all Nigerians to have access to all information or
records of public nature that emanates from or is in the custody or possession
of any public official. The Section goes on to provide that an applicant for
any such public information need not demonstrate any specific interest in the
information sought and can proceed to a competent court to ensure such a
request is complied with. This therefore removes all erstwhile embargoes with
regards to locus standi that may have
existed in the past against any such applicant for public information.
The FOIA in its section 2
imposes on all public institutions the obligation of recording and storing
information about its activities, operations and businesses. The Act also directs
all such institutions to publish certain information[2] in such a way that the
information “is widely disseminated and
made readily available to members of the public through various means,
including print, electronic and online sources; and at the offices of such
public institutions”.[3]
The framers of the FOIA
intended that access to public information should be made as easy and simple as
possible. This is why under the Act, an applicant can make an oral application
for information of a public nature and the authorized official of such public
institution to which such an oral application is made is required by law to
reduce the application into writing, and afford the applicant with a copy of
the written application.[4]
More so, illiteracy and
other forms of disability that preclude a person from making an application in
person for public records or information does not ipso facto  disentitle such a
person from accessing such information under the Act. This is so because the
law allows such a person to make application under the Act through a third
party.[5]
The Act also stipulates a
timeframe of seven (7) days within which an applicant’s request for information
is to be attended to by a public institution. The seven (7) days begins to run
from the moment an institution or public official receives an application for
information. The public institution is to make available the information sought
by an applicant or communicate to such an applicant via written notice, its
reasons for refusing to afford the applicant with part or all the information
requested for.[6]