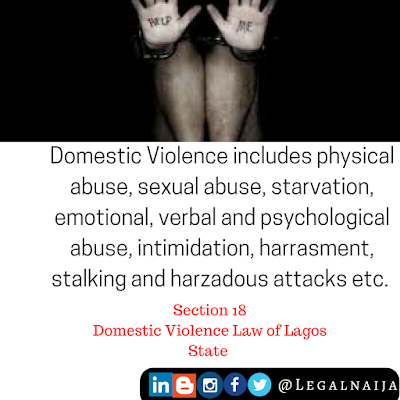 The
occurrence of domestic violence in Lagos is on the increase, initially it was somewhat
considered a subtle issue, but with the rate of publications made daily; it
will interest you to know the actions that constitute Domestic Violence in
Lagos State.

Ø Physical
abuse; any act or threatened act of physical violence towards the person.
Ø Sexual
abuse exploitation including but not limited to rape, incest and sexual
assault; any conduct that abuses, humiliates, degrades or otherwise violates
the sexual integrity, or dignity of the victim.
Ø Starvation;

A
Domestic relationship such as marriage, cohabitation, dating or customary
relationship, family member or domestic staff is sufficient. 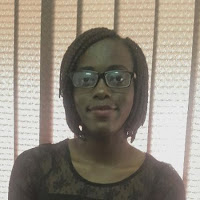 Adesuwa Omozusi is an Associate at Cowrie Partners 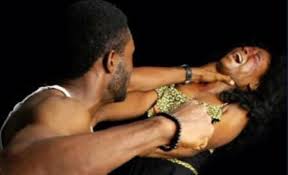 I
have read about many victims of domestic violence, seen photos of bruised women
and heard of the psychological effects it has on the personalities of these
victims. The fear it creates in their minds and in extreme circumstances, the
death of such victims. Domestic violence is a monster; it is wrong and should
be prohibited by all means.
It’s
common to hear friends and family members asking one to endure and bear with it
or better yet pray that the husband turns a new leaf and begins to see his wife
as a partner rather than a punching bag. Let’s not forget wives who also beat
their husbands, though they are a minority. In family courts today, domestic
violence is one of the many grounds upon which spouses seek dissolution of
their marriages.

Over
the years, there has been a call for decisive legislation to deal with domestic
violence in Nigeria and finally its here. Section
19 of the Violence Against Persons Act
2015 prohibits spousal battery and provides thus:
“19(1)
A person who batters his or her spouse commits an offence and is liable on
conviction to a term of imprisonment not exceeding 3 years or to a fine not
exceeding N200, 000 or both.”
This
law is most welcome by advocates against domestic violence and a relief to
victims who must now be informed that there is a law to check their plight. The
law further states that an attempt to commit the act of spousal battery also
attracts imprisonment not exceeding 1 year or a fine not exceeding N100,000
or both. Inciting another to commit the offence also attracts a jail term not
exceeding 2 years or a fine not exceeding N200, 000 or both. Same goes for an
accessory after the fact who aids another who has committed an act of spousal
battery.
Though,
this legislation is a step in the right direction, spouses need to be informed
and most especially supported. The fear of public opinion and also the
protection of the children or family name may prevent victims of domestic
violence from speaking out while they suffer in silence. Such people must
understand that there is no need for shame, rather they should hold their heads
up high for they are survivors, it’s the wrestler of a spouse that should be
ashamed.
P:S
– If you beat your spouse or know anyone who is a victim of domestic violence,
share this link with them and support them, you could be saving their lives.
Adedunmade
Onibokun
@adedunmade