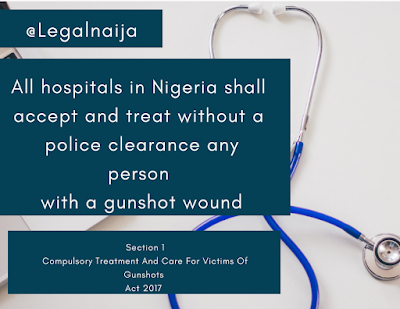 The law mandating the compulsory treatment of gunshot victims
was passed by the 8th Senate and signed into law by President Buhari
in 2017. Before the passing of the law, it was the norm for hospitals to refuse
treatment to gunshot victims and some other hospitals may eject such a victim
from its premises, despite the immediate medical attention needed to save the
life of such a gunshot victim.

The reason why Nigerian doctors would turn their
backs on their Hippocratic oath and refuse to treat victims of gunshot wounds
was due to the incessant harassment and sometimes arrest of medical staff who
rendered such treatment by the police. It was customary for the Chief Medical
Director of such hospital to be questioned as to any links with armed robbery
syndicates or gangs.
While this police directive was being enforced, the lives of
many persons who had been victims of armed robberies and other forms of accidents
or incidents involving gun wounds would usually pass-on before any meaningful
help arrives. Such victim while bleeding would first be expected to be taken to
the police station, after which the statement’s of the persons who helped the victim
will be taken and a police officer dispatched with the victim to a nearby
hospital or a police report prepared by the police but to be handed over to the
hospital. Many Nigerians have died because of this delay and it was to prevent
the further unnecessary loss of life of other Nigerians that the Gunshot Act
was passed into law.
Section 1 (one) of the Act provides that all hospitals in
Nigeria shall accept and treat without a police clearance any person with a
gunshot wound. Section 2 (two) of further mandates all security agencies to
render the necessary assistance to gunshot victims and ensure that they are
taking promptly to an hospital for treatment. Furthermore, in the said Section,
the law provides that all victims with gunshot wounds shall be treated without
a request for initial monetary deposits and such persons shall not be victims
of any inhuman or degrading treatment. 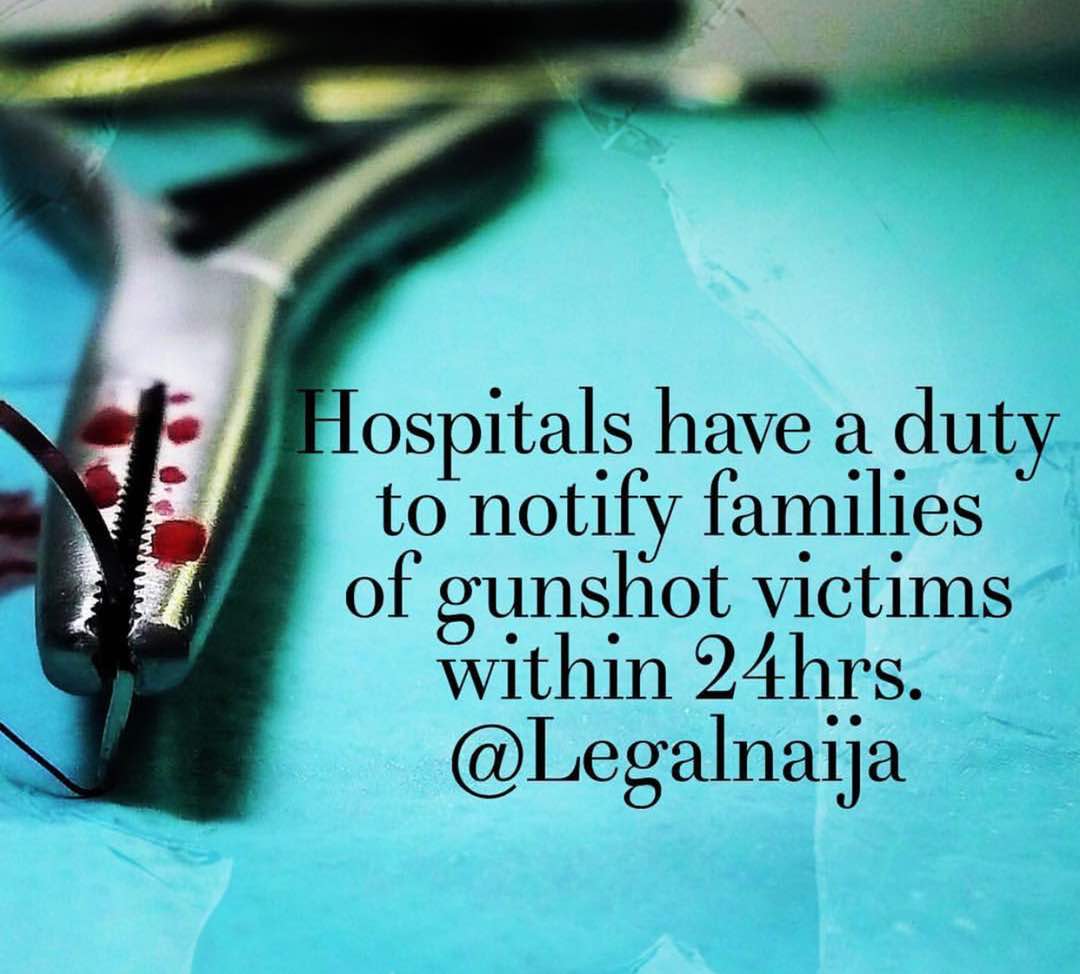 The hospital in Section 3 is also placed with the
responsibility of informing the nearest police station whenever a gunshot
victim is brought in and the Police are mandated to immediately investigate and
ascertain the cause of the gunshot wound. Hospitals that fail to make an
official report according to the law as described above commits an offence and
is liable upon conviction to a fine of N100,000
(One Hundred Thousand Naira) and every Doctor directly concerned will be liable
to up to 6 (six) months imprisonment and/or a fine of N100,000 (One Hundred Thousand Naira) each (Section 5). Hospitals
are also required to contact the family of the victim within 24hrs of identifying
such person (Section 10) and ensure a proper record of such treatments are kept
accordingly (Section 12).
In the past, it was the culture of the police to immediately
request the presence of a gunshot victim at the police station for further
investigation and such persons were usually taken to the station without
adequate attention paid to the wounds and the extent of their recovery. Hence,
the Act in Section 4 restricts the police form inviting a gunshot victim to the
station for investigation unless cleared by the Chief Medical Director of the
hospital.
A key provision of the Act is how it seeks to protect all
volunteers or helpers of a gunshot victim, it was usual practice for such a
person to be arrested by the police, however, the Act iin Section 8 (eight)
directs that such person be treated with respect and shall not be subjected to
unnecessary and embarrassing interrogation in their genuine attempt to save the
life of the victim.
Persons who break the law or who cause any form of emotional
or psychological damage to the victim is liable on conviction to imprisonment
for a term of 15 (fifteen) years without option of a fine. Also any person who
fails to carry out a duty as stated in this Act which leads to the death of a
person with gunshot wounds is liable to imprisonment for 5 (five) years and/or
a fine of N500,000 (Five Hundred Thousand
Naira).
Lastly, in addition to the penalties stated above, the Court
may also order that restitution be made to the victim and same may be enforced
by the victim or by the State Prosecutor. It is important that many police
officers and medical practitioners are informed of the provisions of this law
so as to ensure the protection and treatment of victims with gunshot wounds.
Legalnaija
@legalnaija
www.legalnaija.com