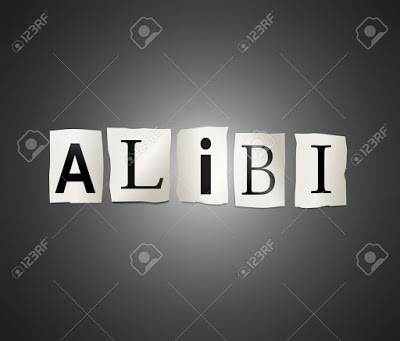 Dunmade Onibokun: Elements of a good Alibi in a criminal trial

Kunle
Aminu Eze, was accused of armed robbery. It was alleged that he and 5 other
people accosted John, a gold merchant just returning from the bank and robbed
him of N15,000,000 (Fifteen Million
Naira). Kunle Aminu Eze was identified by a witness to the crime who claimed
she recognized him as a regular client of an auto-mechanic in her neighbourhood
and described how Kunle Aminu Eze had led the gang by shouting orders. Kunle
Aminu Eze however expressed his innocence and claimed to have been with his
girlfriend in Lokoja when the act occurred. The matter went to trial before the
High Court and Kunle Aminu Eze was sentenced to life imprisonment.

There are many legal
elements to the scenario above including; the crime, the testimony of the
witness, the accused person’s defence and also the conviction. This post will
however be taking a look at the 3rd stated element, which is the
accused person’s defence. How come he had been convicted for the crime even
though he claimed to have been in Lokoja, when the crime was committed?

The word Alibi in its original
latin context as an adverb, means “elsewhere”. The Eight edition of the Black’s
Law Dictionary defines it as “a defence
based on the physical impossibility of a defendant’s guilt by placing the
defendant in a location other than the scene of the crime at the relevant time”.
In essence, the accused person’s alibi from our scenario was that he was
somewhere else with his girlfriend at the time of the armed robbery, how come
he was then convicted?

In the case of Ogoola V.
The State (1991) 2 NWLR (Pt. 175)509, the court held that “it is not a proper
way of raising a defence of alibi for an accused to merely show that he was
elsewhere at a time antecedent to the time the crime was proved to have been
committed. He must go further to show that because he was at that place at that
time, it was impossible for him to have been at the scene of the crime when it
was shown to have been committed.”
The essence of the above
decision is that when an accused person claims in his alibi to have been
elsewhere, he must further prove that he was indeed elsewhere.
To further illustrate, the
court in Obiode V. The State (1970) 1 ALL NLR 35 stated that “the law is that it is not enough for an
accused to raise the defence of alibi at large. He must give adequate
particulars of his whereabouts at the time of the commission of the offence to
assist the police to make a meaningful investigation of the alibi. If the
accused person said he was in a particular locality or with a particular person
or persons, he must give a lead as to the specific place, the names and/or
addresses of whom to contact and the relevant period he was away from the scene
of the crime.

It must also be noted that
if the alibi is however contradicted by the prosecution and sufficient proof is
given to rebut the alibi, then the defence fails. For instance, Kunle Aminu Eze
from our scenario merely stated that he was away from the scene of the crime in
Lokoja. He never gave the name or address of the girlfriend he was with,
neither did the girlfriend testify on his behalf or write a statement
supporting his case.

However, the prosecution
was able to tender the statement of the eye witness who described how Kunle
Aminu Eze had not only been at the scene of the crime at the material time, but
had participated in the crime and was in fact the ring leader of the group of
robbers as he was the person shouting orders to the other members.

In a nutshell, for the
defence of alibi to be successful, such defendant must prove his alibi with
supporting facts such as details of where he was and whom he was with and also
the prosecution must not have superior facts to counter the alibi.
Dunmade
Onibokun Esq.
Adedunmade Onibokun and Co.