Same sex marriage and the effect on our upcoming generation 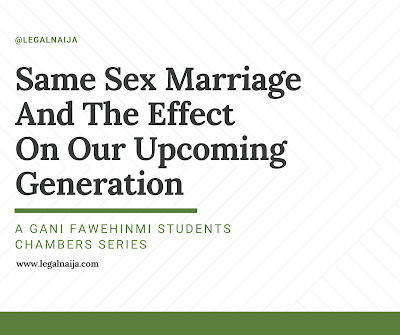 Same-sex marriage (also
known as gay marriage) is the marriage of two people of the same sex or gender,
entered into in a civil or religious ceremony. There are records of same-sex
marriage dating back to the first century though there is no legal provision in
Roman Law, and it was banned in the Roman Empire in the fourth.
In the modern
era, same-sex marriage started being legalized at the beginning of the 21st
century. Today, it is available in 28 countries.
Same-sex marriage is legally
performed and recognized (nationwide or in some jurisdictions) in Argentina,
Australia, Austria, Belgium, Brazil, Canada, Colombia, Denmark, Ecuador,
Finland, France, Germany, Iceland, Ireland, Luxembourg, Malta, Mexico, the
Netherlands, New Zealand, Norway, Portugal, South Africa, Spain, Sweden,
Taiwan, the United Kingdom, the United States, and Uruguay. Same-sex marriage
is also due to become legal in Costa Rica. Israel recognizes same-sex marriages
entered into abroad as full marriages. A ministerial decision decreed that
Armenia shall as well, though as of February 2019 there had been no actual
cases. On 25 July 2019, the Supreme Administrative Court in Bulgaria ruled the
country must recognize a same-sex couple’s overseas marriage. Furthermore, the
Inter-American Court of Human Rights has issued a ruling that is expected to
facilitate recognition in several countries in the Americas.
The introduction of same-sex
marriage (also called marriage equality) has varied by jurisdiction, and came
about through legislative change to marriage law, court rulings based on
constitutional guarantees of equality, recognition that it is allowed by
existing marriage law, or by direct popular vote (via referendums and
initiatives). The recognition of same-sex marriage is considered to be a human
right and a civil right as well as a political, social, and religious issue.
The most prominent supporters of same-sex marriage are human rights and civil
rights organizations as well as the medical and scientific communities, while
the most prominent opponents are religious fundamentalist groups. Polls
consistently show continually rising support for the recognition of same-sex
marriage in all developed democracies and in some developing democracies.

Legal status of same-sex
marriage in Nigeria
Sex acts between men are
illegal under the Criminal Code that applies to southern Nigeria and carry a
maximum penalty of 14 years’ imprisonment. Sex acts between women are not
mentioned specifically in the code, although it is arguable that the
gender-neutral term “person” in Section 214 of the code includes
women. Chapter 21 of that code provides in pertinent part as follows –

Section 215.
Any person who attempts to
commit any of the offences defined in the last preceding section is guilty of a
felony and is liable to imprisonment for seven years. The offender cannot be
arrested without a warrant.

Section 284 of the Penal
Code (Northern States) Federal Provisions Act, which applies to all states in
northern Nigeria, provides that:

Whoever has carnal
intercourse against the order of nature with any man, woman or animal shall be
punished with imprisonment for a term which may extend to fourteen years and
shall also be liable to fine.

Section 405 provides that a
male person who dresses or is attired in the fashion of a woman in a public
place or who practises sodomy as a means of livelihood or as a profession is a
“vagabond”. Under Section 407, the punishment is a maximum of one
year’s imprisonment or a fine, or both.

Section 405 also provides
that an “incorrigible vagabond” is “any person who after being
convicted as a vagabond commits any of the offences which will render him
liable to be convicted as such again”. The punishment under Section 408 is
a maximum of two years’ imprisonment or a fine, or both.

CONCLUSION
In Nigeria, the rate at
which people changes their gender is quite alarming and if this isn’t looked
into with a strict law, the next generation which would be highly vulnerable is
more likely to take into drastically which would lead to the high level of same
sex marriage in Nigeria.

Photo Speak: Egbe Amofin Oodua Meeting on 22/02/2020
ONLY REASON WHY ELECTIONS CAN BE POSTPONED BY LAW
Win N150k OR A 3 Month Internship In The Paul Usoro Challenge