Ronke Omorodion – Are you waiving your rights? 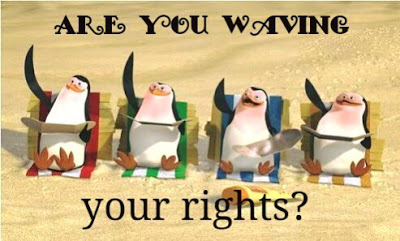 Welcome
back everyone! Ready for a fresh installment in our series? I sure am!

We
come back to Becky and BeWise Digital Limited (we’ve not forgotten about her,
lol). Business had been good but the fuel scarcity and power supply situation
in the country had started to affect the smooth running of her office. Getting
petrol for the office generator had become a hassle and the generator had
started developing faults. Since diesel seemed to be easier to come by these
days, she decided to acquire a new diesel generator for the office.
She
went to a renowned generator retailer close to her office called Jenkins Power
and purchased a new diesel power generating set for N500,000. Part of
documentation she signed when purchasing the generator was a Contract of Sale
document – which she did not actually read because she was in a hurry.
Jenkins also offered to do the
wiring of the generator for a fee but Becky declined and got her own
electrician to do the job after which they started using the generator.
A
week later, while running the generator, an electrical fire erupted from the
generator wiring. The fire was not quickly detected and two PCs, one printer, a
flat screen TV and a large part of the office wall got burnt before the fire
could be put out. It was a miracle that the generator itself didn’t go up in
flames.
Becky
was furious because she was sure the new generator had caused this. She stormed
over to Jenkins office, met with the service manager and started raising a
storm about how her property had been damaged because the generator sold to her
was sub-standard. She promised to take legal action against them and make them
pay for the loss incurred.
Jenkins
Power sent one of their engineers to investigate what happened and they found
out that the fire had been caused by low grade cables that were used to wire
the generator. Becky was still not satisfied and would have proceeded with
legal action until the Jenkins manager pointed out to her that there was a
waiver clause included in the contract of sale she signed that expressly stated
that Jenkins would not be held liable for any loss or damage of life and
property arising from the use of their equipment if the installation was not
done by them.
Becky
went through her copy of the contract of sale she had signed and found out they
were right. She had effectively waived her right to claim damages by signing
the document. There was nothing she could do. She would have to bear the cost
of her losses alone. She blamed herself for not reading through the Contract of
Sale before signing and for getting someone else to install the generator.
Case
Analysis
In
the scenario above, do you know that if Jenkins Power had not gotten Becky to
execute the Contract of Sale, they may have been held liable for Becky’s losses
or at best been made to bear the inconvenience and cost of legal action brought
about by Becky? Are you a business person, do you supply equipment or products?
You should protect your business from unwarranted claims like Jenkins Power did.
How
can I protect my business?
You
can tactfully include a Waiver of Rights/Liability clause in transaction
documents (e.g. a Contract of Sale) to be executed by your clients to protect
your business from frivolous and unfair claims. A waiver, as the name implies,
is an act of intentionally relinquishing or abandoning a known right, claim, or
privilege. It is usually found in different types of contracts ranging for
suppliers contract to hospitals who use it to protect themselves from
liability.
As
a business owner, make sure your contracts are drafted by a legal practitioner
as the inclusion of these clauses might be the lifeline that would save your
business in the future.
Thanks
for reading to the end. I sincerely hope you learnt something new today.

Ed’s Note: This article was originally posted by the author here