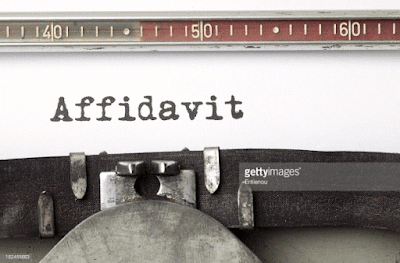 Many people don’t like
lawyers simply because it appears they argue too much, others don’t like them
because they have encountered the ones who charge a lot. A client once told me
“I swallowed all the Paracetamol I could find when I saw your bill.”
All I could do was laugh. Knowing what I had charged, I knew I had undercharged
him just because I wanted him to retain my services and there he was still
insinuating I had overcharged. Like him, many people have the fear that lawyers
overcharge even when they don’t. And yet it’s not so easy to get by without a
lawyer on your side because there will always be a need for one.
However, there are a few
things you might be able to do on your own (if you are smart) that ordinarily
ought to be done by a lawyer. One of them is drafting an affidavit and getting
a police report for your missing or stolen item.
Just Before I tell you how
to go about it, first let me give you a layman definition of an affidavit.
An affidavit is simply a
document of facts made under oath. It is meant to stand as  your court
approved oral evidence. So while making an affidavit you are only expected to
state facts that you know to be true. Usually you don’t have to say what others
told you, just state what you know, so let’s assume you have just misplaced
your latest phone or your purse which had your ID card, ATM card and other
documents, and you rushed to the nearest police station to lay a complaint and
the police officer has asked you to bring an affidavit, here is what you should
do:
1.
Find Out Which Court Is Nearest To
You:
All affidavits for stolen or missing items ought to be done at the court
nearest to where the incident happened. In law it is called jurisdiction I.e.
The court must have power over the matter brought before it. For instance, if
your phone was stolen in Ikeja Lagos state, the appropriate police station will
be Area F while the appropriate court to stamp your affidavit will be at the
Ikeja High Court or Ikeja Magistrate Court. You are not expected to go outside
the court nearest to you. (Or rather the court within your jurisdiction)
2.
Get A Laptop:
Sit in front of a laptop and open Microsoft Word or any other word processor.
3.
Type The Heading:
your heading should be in three lines and in the name of the court you will be
going. Here is how affidavits are headed:

In the Lagos High Court

In The Ikeja Judicial Division

Make sure the heading is bold, centralised and underlined.

4.
The Subheading:
The subheading is a one line heading which states the purpose of the affidavit.
Examples are Affidavit of Loss of Original Certificate , Affidavit
of Loss of Phone etc.

The sub-heading should be directly above the main content of the affidavit and
should also be bold, centralised and underlined.
5.
The Introduction:
The introduction is where you tell the reader about yourself. It usually
contains basic (but static) details about yourself and here is the format.

I, John Doe, a Christian, male, Adult,
Doctor of No. 19 rbnbloggers street, Ikeja, Lagos, do make oath and state as
follows:
The introduction should
contain all those facts so that anyone reading knows a little about you.
6.
Statements of Facts: This is where you
start saying all the things that led to your making the affidavit. It should be
in sequential order and should be in numbered paragraphs starting from
“1.” Each paragraph should carry a single idea and you can have as
many paragraphs as you want but only necessary facts are needed. You should
begin each paragraph with “that”. See example below:
7.
1.
That on the 15th August 2016 I embarked on a journey to work on a BRT bus at
Ojota Bus Park
2.
That while on the journey, I had in my possession my brand new iPhone Six which
had my 080644456d Mtn sim card installed in it.
3.
That around 2 O’clock in the afternoon, two men carrying firearms approached me
along with other passengers on the bus and demanded our personal belongings.
4.
That my iPhone along with several sums of money amounting to Eight Hundred
Naira was obtained from me.
5.
That since then, I have no knowledge of the whereabout of neither the phone nor
the MTN sim card.
6.
The last Paragraph: The last paragraph comes after you have stated all the
facts and you feel its time to close the affidavit. The paragraph is simply a
static line that affirms your sincerity. This is how it is drafted:
7.
That I make this affidavit in good faith conscientiously believing same to be
true and in accordance with the oath Law of Lagos State.
8.
The
signature:
After the paragraph above, it’s time to indicate where you will append your
signature. This should be on the right-hand side below the statements. Draw a
line that is big enough to contain your signature and under the line type the
word: Deponent. Do not sign the signature after you print it. You are
meant to sign it at the registry in the presence of the commissioner for oaths.
9.
State
The Registry:
the next thing to do is to go down one step below and type the following words
on the extreme left-hand side of the document in this exact manner:

Now its time to draft the commissioner for oaths section. You should go down
now and type the following in capital letters:

Leave some space for signature and draw a line for the signature. Under the
line type the following words in capital letters:

11. Print Out: Before you hit the print button,
go over your draft again and make sure you have eliminated all typographical
and spelling errors. Make sure you have also edited the draft to look like it
was done by a professional lawyer. Once you are satisfied, print out three
copies and run to the court, and ask for the court registry.
You will be asked to pay a
token amount which is not up to N500 (as at the time of publishing this post.)
12.   The last step: After you have paid, a
receipt will be issued to you and you will be asked to see the Commissioner for
Oaths. He or she will ask you to sign the documents. Append your signature at
the deponent’s space, then he/she will fill in the date and stamp the documents
and hand them back to you.
Disclaimer:
The opinions expressed in this article should not be taken as a substitute
for legal advice. For all questions and suggestions relating to Law you can
chat with us on our Whatsapp line: 09054551883
or send us an email at law@rbnbloggers.net
Ed’s Note – This article was originally
posted here.