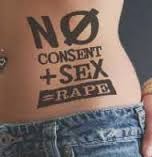 As a
lawyer and blogger, I come across many reports bothering on sexual crimes. I bet
you have as well. I particularly remember the shocking news out of India when
four men raped and killed a lady who commuted in the same vehicle with them.
Don’t push your nose up just yet at the Indians; we both know such similar stories
come out of your city or communities as well. Sexual crimes are a universal problem
which the courts and law enforcement agencies come across almost daily, I
wonder why we have so many perverts and sexual predators people committing
such crimes in today’s society.

In Lagos
State,Nigeria, the Criminal Code Law (2011) in Section 258 (1) provides that “any man who has unlawful sexual intercourse
with a woman or girl, without her consent, is guilty of the offence of rape and
liable to imprisonment for life”. A life time in prison is a long time to rot
cool off in jail because you can’t zip up   control
your sexual urges. Plus, it’s important to identify that fine line between
seduction and attempted rape, the law further states in Subsection (2) that “a woman or girl does not consent to sexual
intercourse if she submits to the act by reason of force, impersonation, threat
or intimidation of any kind, fear of harm or false or fraudulent representation
as to the nature of the act”. I wonder if religious leaders who cajole
their followers to have sexual intercourse come under this head, what do you
think?
Sexual
intercourse between a man and a woman who are married is not unlawful and sexual
intercourse is complete on the slightest penetration of the vagina or any other
part for that matter as seen in Section 259 which says “any person who penetrates sexually the anus, vagina, mouth or any other
opening in the body of another person with a part of his body or anything else,
without the consent of the person is guilty of a felony and liable to imprisonment
for life”. Wow, like I earlier stated, life in jail is a long time for a
crime that takes less than a few minutes to execute, in my opinion, it’s
definitely not worth it, even an attempt to sexually assault or rape is a
felony liable to imprisonment for fourteen (14) years, I bet you don’t want
that either.
Sexual Harassment
is a big thing that could get you a 3 year jail term in Lagos State, you cannot
even touch another person sexually without their consent or you could be liable
to imprisonment for three (3) years, that means squeezing the yansh grabbing
a co-worker or passerby in a sexual manner without their consent is not a good
idea either (S. 261(1)).
“Sexual
harassment is unwelcome sexual advances, request for sexual favours, and other
visual, verbal or physical conduct of a sexual nature which when submitted to
or rejected–
(a) implicitly
or explicitly affects a person’s employment or educational opportunity or
unreasonably interferes with the person’s work or educational performance;
(b) implicitly
or explicitly suggests that submission to or rejection of the conduct will be a
factor in academic or employment decisions; or
(c) creates
an intimidating, hostile or offensive learning or working environment”.
A person
consents if he agrees by choice and has the freedom and capacity to make and
communicate that choice. In determining whether a person charged had reasonable
grounds for believing that another person consented, the court shall have
regard to all the circumstances, including any steps taken by the defendant to
ascertain whether the woman or girl consented. So when a girl says no, she
means no. You may ask how can one tell if she’s saying no but means yes, well, except
she is saying no and putting your penis into her vagina if she implies
yes by her other actions or speech, that will be a question for the court to
decide.
Bestiality
is another ball game, meaning to fuck an animal to have sexual relations
with an animal is a no-no, any person who has sexual intercourse with an animal
is guilty of a
felony,
and is liable to imprisonment for three (3) years (S.265).
Adedunmade
Onibokun, Esq
@adedunmade