PENALTY FOR ARSON UNDER THE LAW 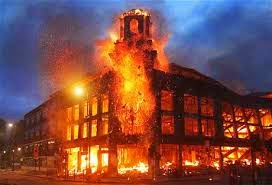 If you have ever been on the war path of an angry mob or
riot, you may have realised their penchant for burning things. Before an
observer can say the words “Jack Robinson”, cars, buildings, stores and other
valuable properties are already going up in smoke. Many a-times, hoodlums have
gone on rampage and vandalized and burnt lots of property. This craving to set
things on fire becomes worse when a mob is trying to serve justice on an
alleged offender, either a thief or gbomo-gbomo kidnapper. Petrol,
matches and an abandoned tyre always seem to appear from nowhere. It is no news
that mob justice is a crime and no one should participate in such act, we all are
guaranteed a right of fair hearing in the constitution and an alleged offender
should be reported to the police or to the appropriate channels of authority.  But let’s concentrate on the burning side of
things and let me tell you a thing or two about arson.
Arson is an offence under the Criminal Code Act and the
provisions on it can be found in Chapter 42, Sections 443 -446 of the Act.
Section 443 defines arson as an act done by –
A mine, or the workings, fittings, or appliances of a mine,
is guilty of a felony, and is liable to imprisonment for life.
In a nutshell, if you set any of the above things on fire wilfully,
you are likely to spend your life behind bars. Did I just see you drop that
match box, lol. Moreover, it’s not important that the arsonist is successful in
committing the act. As anyone who attempts to wilfully and unlawfully set fire
to anything in the above list will be found guilty of a felony and is liable to
imprisonment for fourteen years.
You may also be surprised that Nigerians like food thus it’s
also a crime to wilfully and unlawfully set fire to cultivated vegetable
produce, whether standing or cut; a crop of hay or grass under cultivation,
whether standing or cut; or any standing trees, saplings or shrubs. Committing
such an act can find a guilty person liable to imprisonment for fourteen years.
Also an attempt to commit the above stated crime is a felony and any guilty
party is liable to imprisonment for seven years.
Adedunmade Onibokun, Esq.
@dunmade
dunmadeo@yahoo.com