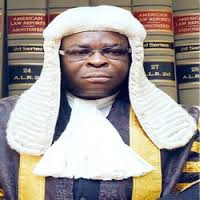 Hon. Justice W.S. Nkanu Onnoghen was born
on the 22nd December, 1950 at Okurike Town, Biase L.G.A. of Cross Rivers State.He
attended the Presbyterian Primary School, Okurike Town between 1959 and 1965.
He later proceeded to Accra, Ghana to attend Odorgorno Secondary School,
Adabraka, Accra, Ghana between 1967 and 1972 for his West African Examination
Council (WAEC) Exams.
He was at Accra Academy, Accra Ghana
between 1972 and 1974 for his WAEC (A-Levels) before proceeding to the
University of Ghana, Legon, Ghana between 1974 and 1977 to obtain his Bachelor
of Law Degree (LL.B (Hons)) and graduated with 2nd Class Upper Division.

He attended the Nigerian Law School, Victoria Island, Lagos between 1977 and
1978 for his B.L certificate.


Her previous professional appointments/positions held include: