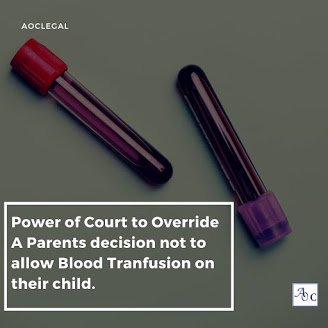 Blood
transfusion is the process of transferring blood or blood products into one’s
circulation intravenously. Transfusions are used for various medical conditions
to replace lost components of the blood. In an emergency, a blood transfusion
can be what saves a patient’s life.

However, not everyone
believes in blood transfusions, for instance it is a deep belief between
Jehovah Witnesses that blood transfusion, according to their faith is not
acceptable. While every global citizen has the right to their choice of
religion, faith or beliefs, it can get tricky when the lines between justice, health
emergencies and religion cross.

It is a general and
well-grounded principle of law that in the determination of a child’s rights,
the paramount consideration of the Court will be the interest of the child. The
Court takes this position in all matters, either it bothers on custody and
maintenance proceedings or life and death matters such as administering a blood
transfusion on a child.

This was illustrated in the
case of Tega Esabunor & Anor vs. Dr.
Tunde Faweya & 4 others, SC.97/2009. In the matter, the first Appellant
was a one month old baby when the incident that led to this Appeal occurred. He
was very ill and would have died if the first Respondent did not act quickly
enough to obtain the Court Order that allowed him to administer the blood
transfusion. After first Appellant got well and was discharged from hospital,
the second Appellant, who fought against the said blood transfusion, because it
is against her religious beliefs, filed an Application wherein she prayed that
the Order for blood transfusion made on 12/5/1997, by the fifth Respondent, be
set aside. The Application was dismissed both at the High Court and the Court
of Appeal.

The Supreme Court when pronouncing
on the matter stated that; “all adults
have the inalienable right to make any choice they may decide to make and to
assume the consequences. When it involves a child, different considerations
apply and this is so because a child is incapable of making decisions for
himself and the law is duty bound to protect such a person from abuse of his
rights as he may grow up and disregard those religious beliefs. It makes no
difference if the decision to deny him blood transfusion is made by his
parents. When a competent parent or one in loco parentis refuses blood
transfusion or medical treatment for her child on religious grounds, the Court
should step in, consider the baby’s welfare, i.e. saving the life and the best
interest of the child, before a decision is taken. These considerations
outweigh religious beliefs of the Jehovah Witness Sect. The decision should be
to allow the administration of blood transfusion especially in life threatening
situations.”

From the above pronouncement,
the Court once again reinforces the position of law as stated in Section 1, Child’s Right Act (2003) that best interest
of a Child to be of paramount consideration in all actions.

BODY OF SAN CONGRATULATES NBA PRESIDENT-ELECT, MR PAUL USORO
Lere Fashola on how law firms can make their Nigerian Legal Awards entries standout and get the judg...
Sponsoring Frivolous Petitions To Embarrass A Candidate Is Indecent And Dishonourable | A. Adegbite ...