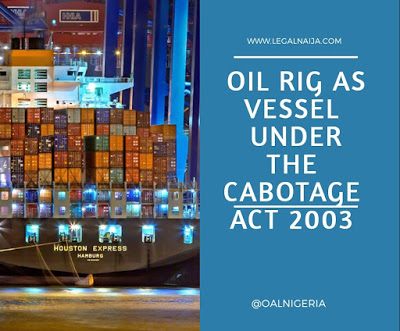 Over the years, the Nigerian maritime industry has witnessed the uncontrolled and illegal participation of foreign shipowners which has been detrimental to the industry. This position necessitated the enactment of the Coastal and Inland Shipping (Cabotage) Act in 2003.

The Cabotage Act was enacted to restrict the participation of foreign vessels in the Nigerian Coastal Trade, to promote the development of local tonnage, to establish a Cabotage Vessel Financing Fund and to build human capacity.
However, it is unfortunate that the Cabotage Act has not produced the desired effect considering that it is bedevilled with various shortcomings. One of such shortcomings is the failure of the Act to expressly include an oil rig as one of the vessels to be subject to the operation of the Act. This position has generated a lot of controversies which appears to have been taken advantage of by foreign shipowners.
Nigeria as a Maritime Nation stands the chance of losing about $2,000,000,000($2 Billion Dollars) of revenue through taxes and rates that oil rigs and drilling operations are charged if steps are not taken in the right direction.
Presently, there is a Bill pending before the National Assembly which has the aim of amending the Cabotage Act. This Article seeks to focus mainly on the Bill to Amend the Cabotage Act with emphasis on Section 13 (definition section) of the Bill to Amend the Act.

The Cabotage Act 2003 was enacted with the aim of enhancing the participation of indigenous shipowners in the domestic coastal trade and restricting the use of foreign vessels engaging in the domestic carriage of goods and passengers within Nigerian coastal waters.
In seeking to enhance the promotion and development of indigenous tonnage in Nigeria’s cabotage trade, sections 3 – 6 of the Act provides that only vessels that are wholly built in
Nigeria, wholly owned by Nigerian, wholly crewed by Nigerians and registered in Nigeria can engage in cabotage trade.
However, sections 15 – 20 of the Act stipulates that foreign vessels may be permitted to participate in cabotage trade if the necessary application for a restricted license and waiver has been made to the relevant authority and approved. Section 30 of the Act empowers NIMASA to enforce and implement the provisions of the Act.
The Cabotage Act with all its positive intent and purposes has so far not achieved its objectives due to various drawbacks in the provisions of the Act. One of such drawbacks is represented by the position in which the Act failed to expressly include an oil rig/platform as one of the vessels specifically falling under the operation of the Act.
This drawback has generated controversy and foreign shipowners have in recent times contested that oil rigs cannot be considered as vessels falling within the operation of the Act which is presently the subject of litigation.

Section 2 of the Cabotage Act defined a vessel to include; “any description of vessel, ship, boat, hovercraft or craft, including air cushion vehicles and dynamically supported craft, designed, used or capable of being used solely or partly for marine navigation and used for the carriage on, through or under water of persons or property without regard to method or lack of propulsion”
It is of importance to note that section 2 of the Act as quoted above, did not expressly define a vessel as a specific thing. Rather, it simply identified certain requirements for determining what could be regarded as a vessel for the purposes of the Act.
Interestingly, foreign shipowners are aware of the failure of the Act to classify a particular thing as a vessel and have advanced this position for arguing that an oil rig is not a vessel under the Act.
However, it is posited that the argument of foreign shipowners cannot be sustained. This is because close scrutiny of section 2 of the Act reveals that a crucial requirement for determining that a thing can be regarded as a vessel under the Act is that such a thing must have been described as a vessel.
In other words, any available description of a thing as a vessel will render such a thing to be recognized as a vessel under the Act.
Given this position, it is important to identify those laws that have expressly described an oil rig as a vessel which provides a premise for arguing that oil rigs are subject to the operation of the Act.

It is of importance to note here that there are local legislation that expressly described an oil rig as a vessel/ship. They are outlined below:

The MSA 2007 expressly included oil rig/platform in its definition of a vessel. Section 337 of the Act provides that a “vessel” means “any ship, craft, machine, rig or platform whether capable of navigation or not which is involved in a collision”.

In the Netherlands, a ‘ships’ or “vessel” is defined as “all objects which, according to their construction, are destined to float and which float or have done so”. This means that all floating offshore structures (including oil rigs) are registered in the Netherlands and fall within Coastal trade.
In the United States of America, under the Jones Act, the following are classified as vessels: ocean-going ships, Tug boats, barges, dredgers, pile drivers, commercial fishing boats, offshore oil platform service boats, oil drilling rigs, Jack-up rigs, Semi-submersible rigs, Drilling ships, Tension leg platforms, and other types of maritime craft. This list practically covers all forms of structure.
In the case of Offshore Co. v. Robison, 266 F.2d 769 (5th Cir. 1959) it was held that a mobile drilling platform was a vessel and that “vessel” had a “wide range of meaning”.
In the United Kingdom, The Merchant Shipping Act defines a ship “to include every description of vessel used in Navigation”. There is no specific type of vessel mentioned, thus covers all forms of structures. The author of Admiralty & Maritime Law (4th ed. 2004) further buttress this fact by stating emphatically that virtually every type of movable rig or structure qualified for vessel status.
Having established that the description of an oil rig as a vessel is not peculiar to Nigeria but is prevalent in other maritime countries, it is pertinent to consider the position of the Nigerian courts on the matter.

The Cabotage Amendment Bill seeks to make certain amendments to the Cabotage Act. A notable amendment sought to be made to the Act is in respect of expressly classifying an oil rig as a vessel to be subject to the operation of the Act. This amendment will deal with the existing controversies concerning whether oil rigs are to be regarded as vessels and subject to the Cabotage Act.   Section 13 of the Bill provides that:
“Vessel” includes any description of vessel, ship, boat hovercraft or craft, including air cushion vehicles and dynamically supported craft, designed, used or capable of being used solely or partly for marine navigation and used for the carriage on, through or underwater of persons or property without regard to method or lack of propulsion and include rigs, floating, production, storage and offloading platforms (FPSOJ floating, storage and offloading platforms (FPSO);”
The importance of this section of the Bill cannot be overemphasized. The lack of inclusion of an Oil rig/platform as a vessel has resulted in a number of suits being instituted at the Federal High Court.
The failure of the Cabotage Act to expressly describe an oil rig as a vessel has also been used by foreign shipowners as an avenue for contesting the statutory powers of NIMASA to levy its statutory fees on oil rigs employed by these shipowners in their drilling operations.
Against this position, a number of shipowners trading within the Nigerian Coastal Waters are refusing to register their oil rigs as required by the NIMASA Act thus denying the Nigerian Government of the required taxes and rates.
Nigeria as a Maritime Nation now stands the chance of losing about $2,000,000,000 ($2 Billion Dollars) if this is not tackled promptly and accordingly.
The provision of Section 13 of the Cabotage Amendment Bill is therefore welcome as it provides a remedy to the existing drawback in the Cabotage Act represented by the failure to expressly describe an Oil rig/platform as a vessel.

The need to pass the Bill pending before the National Assembly cannot be overemphasized. The passing of the Bill will help generate lost revenue and further boost our maritime trade, and importantly, it will finally put an end to the controversy regarding whether an Oil rig/platform is to be regarded as falling within the operation of the Cabotage Act.

Interview With Managing Partner Of Detail Solicitors | Dolapo Kukoyi
Keeping Up In The Creatives: Opportunities In The Sports, Media And Entertainment Industry
#EndSARs: Can Live Video Evidence Be Relied Upon? | Freda Odigie