No Good Reason For Paul Usoro To Resign | Sylvester Udomezue 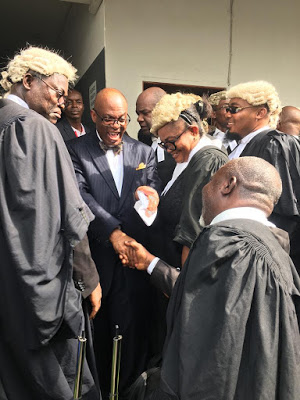 I am sorry, my respected Teacher, Prof, Learned Silk and personal OGA, with due respect, Sir, I  have not seen good reasons/support for the call for Paul Usoro to step aside or resign. My position is clear. Charge against Usoro is not charge against the NBA. And it is not NBA that would decide whether or not EFCC has powers to file charges against Mr Usoro. So, NBA should act wisely.
However, while EFCC believes Mr Usoro has a case to answer, Mr Usoro alleges political with-hunt, saying there are unseen hands. The mere fact that the EFCC issued a statement to say there is a case for Mr Usoro to answer  somehow speaks volumes and lends some support to the call for Mr Usoro to NOT resign. EFCC shouldn’t try to establish its case on social media except there’s more to it. IIn the light of these conflicting  claims, the most reasonable thing is for Mr Usoro to NOT resign. Because, if he resigns and it later turns out to be a witch-hint (a sort of malicious prosecution), Paul Usoro would have been punished most unjustly.
Let Paul Usoro stay in office, pendente lite. That does no one any harm. Neither the prosecution nor his “complainants” have anything to lose in having him in Office while his trial goes on unless there’re other objectives other than criminal prosecution. On the DUTIES OF THE STATE PROSECUTOR  IN CRIMINAL CASES,” with particulars reference to the duty to be “fair and just” and to not be a persecutor nor to secure conviction by all means, I suggest that EFCC should know from the onset that it is not a party to any Criminal matter it is prosecution. Its role is to ensure that justice is done Nothing more. The status of the state prosecutor in criminal proceedings is well captured by Mr Justice SUTHERLAND of the US Supreme Court  in the case of *Berger v. United States*, 295 U.S. 78, 88, 55 S.Ct. 629, 633, 79 L.Ed. 1314):
*”The … State Attorney is the representative not of an ordinary party to a controversy, but of a sovereignty whose obligation to govern impartially is as compelling as its obligation to govern at all; and whose interest, therefore, in a criminal prosecution is not that it shall win a case, but that justice shall be done. As such, he is in a peculiar and very definite sense the servant of the law, the two-fold aim of which is that guilt shall not escape or innocence suffer.
He may prosecute with earnestness and vigor—indeed, he should do so. But, while he may strike hard blows, he is not at liberty to strike foul ones. It is as much his duty to refrain from improper methods calculated to produce a wrongful conviction as it is to use every legitimate means to bring about a just one”*
Good news night, Sir.
I remain loyal.
Respectfully,
UDEMS.
Sylvester Udomezue