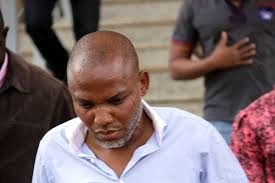 Introduction
Bail is simply
a process or procedure whereby a person who has been denied of his constitutional
right to freedom of movement (in other words, incarcerated due to the alleged
commission of one crime or the other) is released upon security provided by him
to the tune of the order of the court or any other body that has the authority
to grant such bail application. The case of Nnamdi Kanu who has been granted
bail on April 25th, 2017. The Federal High Court, sitting in Abuja, has granted
Nnamdi Kanu bail in his longtrial for charges bordering on treasonable felony.
The justice, Justice Binta Nyako, while granting the bail application by the
counsel to Nnamdi Kanu, on health grounds, ordered that he be released on bail
on the following grounds:
1. That he
provide a highly respected Jewish leader as a shorty for his bail
2. That he
provide a ‘highly placed person of Igbo extraction such as a Senator’ as well
as a ‘highly respected person who is resident in and owns landed property in Abuja’.
Each of the sureties to be provided by Nnamdi Kanu is to make a deposit of N100million
each for his release. He has also_ as part of the conditions for his bail been precluded
from attending any rally or granting interviews to members of the press. He is
to also surrender his British and Nigerian international passports to the
registry of the court. Thoughts on the Bail Conditions First and foremost, it
is to be noted that the Federal High Court (or any other court for that matter,
so long as it has the jurisdiction to try the offence) can impose whatever bail
conditions it wishes on the bail applicant, taking into cognizance such factors
as the nature of the offence, the ability of the applicant to influence
witnesses and/or evidence due to high standing in the society, and a host of
other factors. However, at all times, courts are expected to ensure that the
conditions imposed by them for granting a bail application are reasonable and
not onerous, such that the applicants can be able to meet up with the
conditions in order to secure their freedom and be free from the clutches of
the prison yard. Please note that the operative word here is Onerous; that the
conditions set for the bail of the applicant are not onerous. Question:
In the above
case of Nnamdi Kanu, is the bail condition imposed by the Federal High Court
too stringent and onerous?
A bail
application if and when sought by an accused person is simply to further the provisions
of Section 35 of the Constitution of the Federal Republic of Nigeria; to seek
the enforcement of said rights and secure the freedom of the person in
question. Is Nnamdi Kanu’s Bail terms onerous?
The question
of whether or not the bail terms imposed on an accused person is onerous or too
stringent depends on the peculiar circumstances of each case before the court. In
the case of Nnamdi Kanu’s bail application, several persons spanning the entire
length and breadth of Nigeria, has taken to Social Media to protest that the
bail terms imposed upon the Leader of the Independent People of Biafra are too
stringent for him to meet. N300 million is too much a sum of money, as well as
the insistence of the Justice that he provide a Jewish leader as a surety. Is
there any law in Nigeria that provides for such? Surely that is unreasonable?
In my own opinion, it is. What if he is unable to procure a Jewish leader as a
surety? He remains in prison?
Yes, if Nnamdi
Kanu is unable to provide a Jewish leader, a person resident in, and with
property in Abuja, and a person of high standing in the Igbo community, all of them
to provide the combined sum of three hundred million naira, then Nnamdi Kanu is
going to remain in prison. Steps to take:
If the Counsel
to Nnamdi Kanu considers the bail terms to be too stringent and draconian, then
they can apply to have the terms varied for the leader to something they
consider reasonable enough for them to put up with. For, as the famous saying goes:
if the bail terms granted to an applicant are too draconian such that he cannot
meet them, then it means that no bail was granted. Further thoughts:
Nnamdi Kanu
had been granted bail in the past, yet the Muhammad Buhari led administration
consistently refused to allow him to leave the clutches of the Kuje prison in
Abuja, dredging up a plethora of excuses pertaining to why he should
remain in
prison custody. The Federal Government blatantly disregarded the rule of law. In
this new bail granted to Nnamdi Kanu, will the Rule of Law prevail? Or will the
Buhari-led government decide once again to keep the man trapped in the clutches
of Federal prison?
Kingsley
Ugochukwu Ani Esq. is a legal practitioner, blogger, corporate branding expert,
and human rights activist living and working in Lagos, Nigeria. You can contact
him via +2347035074930, aniugochukwu@gmail.com or on Linkedin, Facebook, and
connect with him on Twitter.

The closure of businesses shows why Lawyers must embrace information technology in the workplace | A...
Employees’ Social Media Conduct: Can Disciplinary Measures Be Taken Out On The Basis Of This? | Zeni...
Join Us On Legalnaija Live Chat Every Month