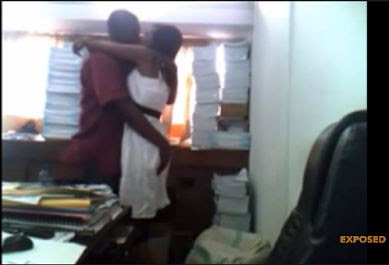 If you are familiar with Nigerian
Universities or you probably studied in one, you may be familiar with instances
involving sexual harassment, where naughty professors take advantage of students
and harass them into having sex in exchange for marks. It’s also both ways as
some girls will rather give it up rather than study thereby going out of their
way to get the attention of the lecturers, but a willing student who decides to
play dirty with her professor is different from one who is forced into the
relationship.
It’s also common to see these professors
boast in the open among their counterparts about their sexual escapades with students
young enough to be their daughters, apparently, they have no shame and if you
are a professor reading this and you indulge in such act, saying shame on you isn’t
enough, we just wish karma catches up with you real quick in a way that hurts.
Tertiary institutions have not been
able to adequately stem this tide and sometimes have been involved in covering
up such situations. It’s Nigeria anyway, in a better environment, such lecturer
will be sacked and never be allowed to teach ever again. Anyway, we hope they
all get what’s coming to them.
Great news however as the Nigerian Senate
seeks to introduce a Bill for an Act
to make provision for the prohibition of Sexual Harassment of Students by
Educators in Tertiary Institutions and for other related matters, 2016 (S.B. 262). This Bill was sponsored by Sen. Ovie
Omo-Agege (Delta Central) and 57 others. The Bill got the nod of distinguished
Senators and has scaled through second reading, currently it has been referred
to the Senate Committee on Judiciary, Human Rights and Legal Matters to report
back in four weeks.
The
proposed law seeks to make it a criminal offence for any educator in a
university, polytechnic or any other tertiary educational institution to
violate or exploit the student-lecturer fiduciary relationship for sexual
pleasures. The Bill if passed imposes stiff penalties on offenders in its
overall objective of providing tighter statutory protection for students
against sexual hostility and all forms of sexual harassment in tertiary schools.

The
bill provides a compulsory five-year jail term for lecturers who sexually
harass students. Also, vice chancellors of universities, rectors of
polytechnics and other chief executives of institutions of higher learning will
go to jail for two years if they fail to act within a week on complaints of
sexual harassment made by students.

We believe the time is right for us to stamp out and
rid our educational institutions of sexual harassment especially in
Institutions of Higher Learning. Moreso, we cannot wait to see naughty
professors prosecuted and jailed under the new law when it is introduced.

The
bill expressly allows sexually harassed students, their parents or guardians to
seek civil remedies in damages against sexual predator lecturers before or
after their successful criminal prosecution by the state.