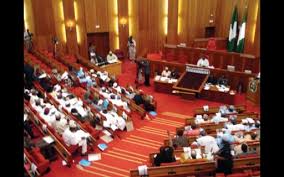 The Senate on Tuesday,
September 27, 2016 commenced consideration of the Report of its Ad-hoc
Committee on the State of the Economy. The Report presented before the Chamber
for consideration has seventeen recommendations. The recommendations were
extensively deliberated upon by  Senators and at the end most of them were
adopted by the Chamber.
According to the report,
the Senate of the Federal Republic of Nigeria conducted a two-day intense and
wide ranging debate on the state of the Nigerian economy. It observed that the
negative GDP growth of 0.36% and 2.6% in the first and second quarters of 2016
technically plunged the national economy into recession. This contraction was
largely due to the fall in oil revenues and further exacerbated by the
vandalism of the nation’s oil assets in the Niger Delta region as well as the
country’s plummeting foreign exchange reserve from more than $60 billion in
2007 to $24 billion currently.
Major highlights of the
report is the decision of the Upper Legislative Chamber, urging President
Muhammadu Buhari not to sell the country’s national assets, and the suggestion
to raise a team of experts that would engage the youth of the Niger Delta for
amicable resolution of the crisis in the region. The report also summoned the
Chief Financial Reporting Officer of the federation to brief the Chamber.
Similarly, five Motions
were also debated and passed by the Senate, they include:
1) Inconclusive Elections,
sponsored by the Deputy Senate President, Ike Ekweremadu (Enugu West) and the
Senate Leader, Muhammed Ali Ndume (Borno South). The Motion sailed through with
three prayers below:
A) Call on the President
of the Federal Republic of Nigeria to immediately nominate suitably qualified
persons to fill the vacant positions at INEC in line with the constitution to
enhance the capacity of the Institution to conduct conclusive elections.
B) Call on INEC to
immediately conclude all pending re-run elections in the country.
C) Constitute an Ad-hoc
Committee to hold a public hearing to review the performance of the INEC
in the last one year with a view to ascertain the factors that may have
caused the perceived decline of the electoral system.
2) Unscrupulous violation
of Foreign Exchange (Monitoring and Miscellaneous) Act, sponsored by Sen. Dino
Melaye (Kogi West). The Motion noted with serious concern the repatriation of
$13.92 billion illegally out of Nigeria by the Mobile Telecommunication Limited
(MTN) through its bankers between 2006 and 2016. The Motion scaled through with
single resolution below:
A) Mandate the Committee
on Banking, Insurance and other Financial Institutions to carry out a holistic
investigation into the matter and report back to the Senate.
3) Earth Tremor and the
preparedness of Nigeria to deal with the intending consequences, sponsored by
Sen. Danjuma La’ah (Kaduna South). The law-maker noted that the Earth tremor
that occurred in Kwoi and its environs in Jaba Local Government Area of Kaduna
State on Sunday, through Monday September 11 and 12, 2016 as well as the
increasing Earth tremors occurrence in Nigeria in recent time, there is the
likelihood of witnessing Earth Quake in the near future. The Motion was passed
with three prayers below:
A) Urge the government at
all levels to take the Earth Tremor warnings in parts of the country serious
and begin to take proactive measures to educate the populace on what to expect
and how to react when it occurs.
B) Urge the National
Emergency Management Agency (NEMA) and the Security Agencies to move in
immediately through public enlightenment and drills to prepare the people
against any eventuality as the resources required at this stage would be
minimal.
C) Mandate the Committee
on Environment and Solid Minerals to undertake tour of affected communities and
report back to the Senate.
4) The need to ascertain
the Degree of Local Content in Nigerian Oil and Gas industry, sponsored by Sen.
Gershom Bassey (Cross River South). He stated that the Senate is aware that the
National Committee on Local Content Development (NCLCD) discovered that the
local participation in the upstream sector of the oil and gas industry in
Nigeria was less than 5% meaning that 95% of the yearly expenditure of about $8
billion left the country. The Motion also sailed through with two resolutions
below:
A) Mandate the Senate
Committee on Petroleum Upstream and Gas to conduct a public hearing to
investigate the implementation of local content with a view to determine the
degree of compliance with the Nigerian Oil and Gas Industry Content Development
Act (NOGIC) by the industry operators.
B) Mandate the Senate
Committee on Petroleum Upstream and Gas to investigate the utilization of the
Nigeria Content Development Fund.
5) Looming crisis in the
Nigerian Aviation Industry, sponsored by Sen. Samuel Anyanwu (Imo East). The
Law-maker noted with concern that the looming crisis in the Aviation sector
portends grave danger to air safety and operations. He added that the sector
has been gasping for survival over some years now but worsen by the current
economic recession. The Motion was passed with two prayers below:
A) Mandate the Committee
on Aviation and the Ministry of Aviation to liaise with the Nigerian Civil
Aviation Authority (NCAA) to urgently look into the problems faced by the
airlines in order to fashion out possible solutions to the problem and avert
latent danger inherent in the crisis.
B) Mandate the Federal
Ministry of Transport to urgently commence the rehabilitation of major highways
and the rail system to serve as a viable and safe alternative to air travels.
Ed’s Note – This article was originally published here