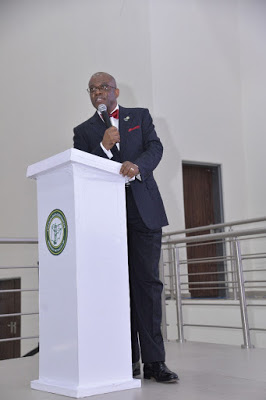 In
his address, the President of the NBA, Paul Usoro, SAN, raised two critical
issues of urgency that personally affected all lawyers and Nigerians, no matter
our regions of origin, religion, stations in life or professions. According to
the President, the first is the issue relates to the security of lives and
property or more correctly, the pervasive insecurity of lives and property in
our land. To shed light on the statement he related the tragic events of three
colleagues, Honourable Kennedy Ofuezuem Amin Nwashindi of Asaba Branch; Frank
Promise Igwe of Port Harcourt Branch and Lowuruga Obadiah Yabura of Wukari
Branch, who had been kidnapped and killed by their abductors or in the case of
Frank Igwe who was assassinated in broad day light.
The
second issue is on what the NBA President termed as the twin “independence
pillars” of the rule of law – i.e. independence of the judiciary and
independence of the legal profession.   Mr. Usoro also mentioned the
penchant of government authorities to disobey court orders and the various
bottlenecks that encumber and inhibit access to justice by the citizens. With a
focus particularly on the independence of the judiciary which means not only
the independence of tenure and control of funds but also the latitude to have
an independent and uncontrolled mind to reach decisions and dispense justice
fairly to all manner of men without fear or favor.
There
has been continuous outcry for the enforcement of the provisions of the Nigerian
Constitution that provide for the autonomy of the Judiciary but State
Executives continue to prefer controlling the purse of the Executive and using
that as a form of control over the arm of government. According to Mr. Usoro,
SAN, Judges are threatened, intimidated and blackmailed mostly by the executive
arms of government and their agencies both at the Federal and State levels.
According
to the NBA President, “the robustness of the judiciary lies, not only in the
soundness of its judgments but in the inherent right of judges to dissent even
amongst themselves and to make independent judgments.  If Judges can
dissent amongst themselves, then it should be expected and it is a right that
inheres in the office for Their Lordships to dissent from the opinions, wishes
and thinking of State officials, whether at the Federal or State Governments.”
The
President also charged members of the Bar and fellow citizens when he said “the
government must guarantee and we – the Bar and the Bench – must rise up to
protect the independence of the judiciary and the right of our judicial
officers to have independent minds in the discharge of their onerous
responsibilities. We would, by so doing, be promoting and protecting the Rule
of Law in our land.”
The
2nd part of the 2ndsecond issue addressed by the NBA
President is also the independence of the Bar. According to him, lawyers have
also begun to feel intimidated and are unable to truly practice their
profession without fear of being labelled “Anti – Government”.
The
two issues raised have profound impact and effect on how society
operates.  Without the rule of law and security of lives and property,
society gradually descends into a state of anarchy and democracy becomes a mere
pretension.  Democracy itself cannot survive without the rule of law.
It
is important that that the government and the people pay attention to the
issues raised in the NBA President’s address as they speak to our collective
freedoms and security as a people.
Legalnaija

Names of Counsel that should appear in judgement of court; highlighting the Court of Appeal’s decisi...
IP ABC: Does Sampling Music Amount To Coyright Infringment | Infusion Lawyers
Updates on the Administration of Criminal Justice Act, 2015