Need For Partnership Between all Arms of Government 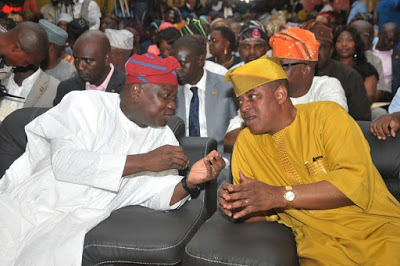 There is no doubt that the nation and Nigerians will benefit from a strong partnership between Arms of Government.  The immense benefits of such relationship will certainly come to bear in the lives of the people. Such partnership is evident in many States in Nigeria, most especially, Lagos State.

At the 2017 1st Quarter, Town Hall Meeting of His
Excellency, Governor Akinwunmi Ambode which took place at the Ajelogo Housing
Scheme, Mile 12 Lagos, on Thursday 19th
January 2017, this collaboration was evident between the Executive and the Legislature. Senator Gbenga Ashafa, the Senator
Representing Lagos East Senatorial District of Lagos State  commended and praised the Governor Of Lagos State, Mr. Akinwunmi
Ambode for his Economic, Infrastructural and Environmental Initiatives in Lagos
State.
At the end of the well-attended event wherein
the Governor had updated Lagosians on his activities in the past quarter as
well as his plans for the year 2017, the Senator stated that “You cannot argue
the fact that everywhere you turn to in Lagos State you can see and feel the
presence of the Government. Our Governor, has continued to set the pace with
his Economic direction, Infrastructural Development as well as environmental
development initiatives.”
Speaking further, he commended
the Governor for being in touch with Lagosians through his quarterly
interactive sessions through which he gives the people feedbacks on the
activities of the Lagos State Government.
In conclusion, Senator Gbenga
Ashafa restated his support for the initiatives of the Ambode led Government of
Lagos State and urged all Lagosians to support the government and to play their
part  by being law abiding citizens.
The Town Hall Meeting was the 6th
in the series that have been organized by His Excellency, Governor Akinwunmi
Ambode since he resumed office in May, 2015.