MUTINY UNDER THE ARMED FORCES ACT

Scenario
Its 4am at the military base in the northern part of Borno
state, the camp commander has just received intelligence that heavily armed
insurgents have been spotted advancing into a neighbouring town. The commander immediately
rallies the troops and orders an immediate assault on the convoy of insurgents.
However, several soldiers in the battalion refuse to engage the enemy because
they believe the insurgents have superior fire power and refuse to obey the commander’s
orders. Tempers flare, a brawl ensues among the troops and the commander is
shot at by a junior officer spear heading the conflict. The military police
have however calmed the situation and the officer who shot the pistol during
the brawl has been arrested and will be facing a Court-Martial.
THE LAW

This blog post is the first of a series relating to crimes
and punishment under the Armed Forces Act, Cap C20, Laws of the Federal Republic
of Nigeria (2004).  Currently, over 200
Military personnel are undergoing a Court-Martial for several offences including
mutiny, assault, misconduct and tampering with military property. Though some
are being tried for lesser offences, about 12 have been found guilty of the act
of mutiny and sentenced to life imprisonment, a punishment that was commuted
from the initial death sentence handed down for shooting at a vehicle conveying
their commander. 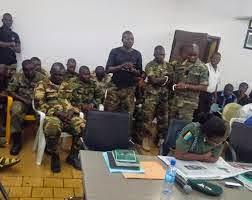 Info-graph on rights of Company Shareholders
The #EndSARS Protest: What Next - Adedunmde Onibokun
NBA President, Paul Usoro SAN Reacts To The Kidnap Of A Member Of The Bar