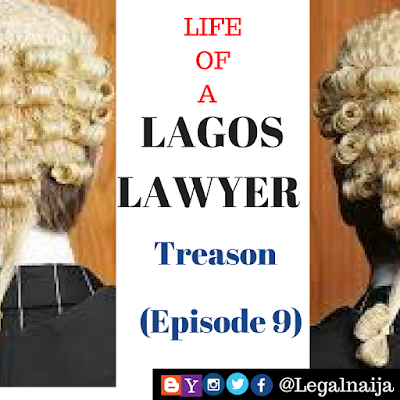 “Are
you paying attention? Good. If you are not listening carefully, you will miss
things. Important things. I will not pause, I will not repeat myself, and you
will not interrupt me. You think that because you’re sitting where you are, and
I am sitting where I am, that you are in control of what is about to happen.
You’re mistaken. I am in control, because I know things that you do not know. [pause] What
I will need from you now is a commitment. You will listen closely, and you will
not judge me until I am finished. If you cannot commit to this, then please
leave the room. But if you choose to stay, remember you chose to be here. What
happens from this moment forward is not my responsibility. It’s yours. Pay
attention.”

Those
were my client’s first words when I asked if he was guilty. Mr. Paul was on
trial for treason and was facing the death penalty since Section 37 of the
Criminal Code had not changed since it became law in 1990. In other circles, my
client may have been described as a freedom fighter or a visionary of some sort
but in within the walls of this prison, bound by chains and under 24 hour
watch, he was a criminal.

It
all started about 10 years ago, Mr. Paul had been recruited from the United
States to sit as a Director over the country’s largest diamond corporation. Mr.
Paul had six Degrees,  Masters from
Oxford and Yale, a Ph.D from Harvard and a IQ of over 160. Dissatisfied with
the rot and level of corruption in the system, Mr. Paul had set up a whistle
blowing website from which he and his special team of hackers had published
damning information about corruption at the highest level of government.

The
Secret Service and the Police had been hacked by Mr. Paul’s associates and
hundreds of documents containing state secrets had been shared with the world.
The resulting inferno of reactions could never have been fathomed. Diplomatic
relationships were ripped to shreds and there had been riots in several states
across the country. People in authority were calling for Mr. Paul’s head on a
pike. A fact I didn’t think bothered him at all.
The
search and arrest of Mr. Paul could be described as a picture from the search
for Pablo Escobar. It had taken the military months of combing every part of
the east-midland forest for his operational base after he had been forced to
flee when the police declared him wanted. He had evaded arrest on several occasions
by only a whisker and had to keep moving deeper into the jungle thus taunting
the military to catch him if they could. Which is why I am most bothered because
Mr. Paul was never caught but rather he had surrendered himself at the Police
HQ barely 72 hours ago.

Mr.
Paul’s arraignment earlier in the day had also been eventful. The court
premises was full and the court room was crowded to full capacity. He had to be
smuggled in through the underground parking lot and It had taken the threat of
contempt from the judge to keep the crowd quiet when he was ushered into the
court from a back door. His charge had read –

“That
you Paul Ukubum (M) 45 years old, and unknown persons all of Corrupt Gate Headquarters,
Gizimoto Local Government Area of Indu State on diverse dates (between January
2004 and October 2017) at Owerri Imo State and other places within the jurisdiction
of the Federal High Court with intent to levy war, overawe and overthrow the
legitimate Government did conspire among yourselves to commit felony to wit:
treason against the President of the Federal Republic and you thereby committed
an offence contrary to section 37(2) of the Criminal Code Act Chapter 77, Laws
of the Federation of Nigeria 1990 and punishable under section 37 of the
Criminal Code Act.”

“How
do you plead”

“May
I make a statement, Your Lordship”

“I
will like to replace my counsel on record”

“Ok,
who will be your new counsel”

“I
am scheduling an appointment with him later today”

“Will
he take your case on short notice, you have to be back in court day after
tomorrow”

The
call had come 3 hours later, Mr. Paul had requested I visit him in detention
and had deposited N75,000,000 in the
firm account two and a half hours earlier. What was he planning? Why did he personally
request I be his lawyer? and what the hell was really going on here? A voice
told me to walk away but my feet would not budge, somehow Mr. Paul had succeeded
in snaring me into his plot and I felt foolish not knowing what to expect from
the genius sitting across the table. One thing was for sure, I was not going
anywhere.

Join us next time for
another episode of “Life of a Lagos Lawyer”. An exclusive Legalnaija series.

PLESE
NOTE: This is a work of fiction. Names, characters, places and incidents either
are products of the author’s imagination or are used fictitiously. Any
resemblance to actual events or locales or persons, living or dead, is entirely
coincidental.

Survey:How Much Do Nigerian Lawyers Earn? by Babatunde Ibidapo-Obe
Photos from the Art of Legal Advocacy and Business of Law Training for Lawyers
NBA Ikeja Celebrates Its Members On Their Conferment as SAN