LIBEL & SLANDER: TO DEFAME ANOTHER 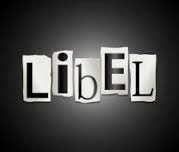 The recent rise in Nigeria’s
online activity has brought about a new way of sharing information, social
media and blogging have become mainstream sources of information for anything
from breaking news to entertainment news, and even gossip.  With over 11 million Nigerians on facebook,
twitter and many blogspots springing up daily, Nigeria is now a major player in
the social media digital world.
With the constant live streaming

of information and trends, it is difficult to separate the truth from the lies. These writers who are usually amateurs and are
sometimes tempted to throw caution to the wind, write whatever they well
please about whomever they well choose. No one disagrees more with the limitless
freedom available on social media and the internet other than politicians and public figures who are
usually the subjects of very crude and indecent remarks on social media.  It is of immense importance to note that
though we have the freedom of expression to tweet, post, blog or say what we
like, the law imposes limits on this freedom and saying the wrong thing about
the wrong person may be classified as being defamatory thus inviting civil and criminal litigation.

What is defamation?
According to the Criminal Code in
section 373, a defamatory matter is a matter likely to injure the reputation of
any person by exposing him to hatred, contempt, or ridicule, or likely to
damage any person in his profession or trade by any injury to his reputation. Such
matter may be expressed in spoken words or in any audible sounds, or in words
legibly marked on any substance whatever, or by any sign or object signifying
such matter otherwise than by words, and may be expressed either directly or by
insinuation or irony. It is immaterial whether at the time of the publication
of the defamatory matter; the person concerning whom such matter is published
is living or dead. In essence, saying anything likely to damage the reputation
of a person may be considered defamatory.
Defamation could either be a
libel or slander, it is considered libel when the false statement is published
in written form for instance in newspapers, magazines and the web but considered slander when it is spoken.
What are the legal consequences
of defamation?
Any person, who publishes any
defamatory matter, is guilty of a misdemeanour and is liable to imprisonment
for one year; and any person who publishes any defamatory matter knowing it to
be false, is liable to imprisonment for two years. Also, any person who publishes,
or threatens to publish, or offers to abstain from publishing, or offers to prevent
the publication of defamatory matter, with intent to extort money or other
property, or with intent to induce any person to give, confer, procure, or
attempt to procure, to, upon, or for, any person, any property or benefit of
any kind, is guilty of a felony and is liable to imprisonment for seven years
(Section 375 – 376, Criminal code).
Before you however think that you
are going to prison because of what you tweeted or posted or said about someone
else, note that the publication of a defamatory matter is not an offence if the
publication is, at the time it is made, for the public benefit and if the
defamatory matter is true. Publications may also be deemed privileged and not a
crime when such was made under the directive of the President, Governor or
Minister and when it forms part of a court proceeding or proceedings backed up
by law.
Adedunmade Onibokun
‘adedunmade