WHY WE NEED TO CHANGE THIS NATION 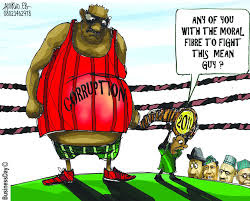 If you are Nigerian
reading this blog, I dove my heart to you. I am wondering how you could be so
tolerant when your lives are continually being destroyed. The monies meant to
rehabilitate your roads, build you hospitals, upgrade your schools, install
power and practically change your lives has been shipped off to foreign
accounts or used to buy exotic cars, build fantastic houses and sponsor exorbitant
lifestyles of the corrupt. Sad thing is when these thieves come along, rather
than give them a piece of your mind, you call them chairman.
The present administration
of President Buhari has come out strongly to fight corruption, collaborating with
the US in a bid to bring all the corrupt Nigerians to book and like always you
just read the news from the papers and deliberate over the captions in your
living rooms or better yet at the beer parlours. While you let someone else to
do your dirty work for you. If you are Nigerian reading this, I think you are
very lazy and maybe you don’t deserve a better Nigeria.
The National Assembly
which consists of your representatives which you elected has constituted itself
as the biggest money guzzling enterprise in Nigeria where the honourable
members make off with millions of naira and use their positions to enrich
themselves and their cronies. You agitated that they should reduce their pay, a
proposal they have tossed into the bin with the excuse of making further
deliberations. Yet, you cannot do anything, you cannot even send a clear
message to the National Assembly, that we voted them into office and they must do
our bidding, maybe it’s because you have lost the right to do that because some
of you collected bribes or refused to vote in the last elections.
Trillions have been stolen
from our Nation, from our pockets and from our futures and we just lay back,
suffering and smiling. Our educational system is below par compared to other
countries of the world, that’s why we spend 1.5 Trillion annually on education
abroad according to the Vice President. We are travelling to England, US and
even Turkey for education. If all the monies stolen were directed into
infrastructure for you, can you imagine how great our country will be.
The political class has
raped us since the 1960s, we had so much promise but our oil revenues have been
cleared out, our country is in debt, states can’t afford to pay salaries and
millions of our youths are still out of a job, but that does not get you angry,
it only gives you more reasons to tweet some more, probably drink some more or
my favourite, keep praying for Nigeria. I know God is not a wicked God and with
all the revivals, special prayer sessions and vigils held on behalf of Nigeria,
there has been no change, electricity is not even stable yet, after over 40
years must we still wait for a miracle? Which is obviously not coming, or a
messiah who will come and with a wave of his magic wand set everything
straight.
My friend, you had better
wake up, open your eyes, get off your knees and start sending a clear message
to your representatives in government positions wherever they may be. Tell them
you are tired of the despicable mess we continue to swim in as a country, that
you will no longer tolerate mediocrity, corruption, nepotism and the likes in
our country. That you want a change and will do all you can to get it. If we
all sing this song, maybe we can turn our Nation around in 10 years or maybe we
should retire to ur prayer corners and wait another 40 years before we get it
right, hopefully a miracle may have come by then.
There is no fear of
corruption in this Nation, rather there is a yearning for an opportunity to
have the same opportunity to loot the funds. The courts have not given us
justice and the punishments served to the few who are put on trial do not serve
as a deterrent. The police force is hungry, with under paid salaries and lack
of equipment, no police man will put his life on the line for yours.
We must be the new
watchdogs, everyone corrupt person out there must be afraid of us,  every public official asking for 10% must
begin to fear the wrath of the people, every Governor, commissioner, minister
and public servant must be forced to take up their responsibilities and live above
board. The fear of you and I must be their motivating factors but if we
continue to tweet and sit our asses down doing nothing but wailing and praying,
we will never amount to much as a Nation.
I thought Government was
supposed to be of by the people, by the people and for the people but that was
said in the United States of America, here it is government for myself and my
family.
Adedunmade Onibokun
@adedunmade

Examining Security and Human Rights Issues in Nigeria’s Extractive Industry
WHO IS AFRAID OF BEING DEFAMED by Collins Arikor
Memorandum of Understanding, It’s Uses And Template