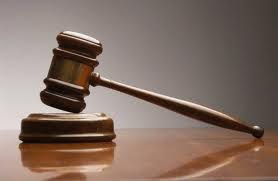 There are possibly more than a thousand reasons why we hold a second thought and give way for due reflection before we take an action. One of these reasons is probably rested in our belief in the existence of a super Being, our conviction in His supernatural abilities and our good understanding of the consequences of sin. This belief is purely a function of our morality as mortal men. It is simply
religious.
Another factor very far away from this religious view is in the face of the worldly punishment that our actions or even, inactions may attract. This is the law. The law more than any other thing is the reason why a public officer would hesitate before he converts public fund and a driver would be conscious of fastening his seat belt even though the belt makes him uncomfortable in his own car. What more, the law avails nobody, whether natural or artificial.
It is the law that a young person found guilty of an offence be remanded in a juvenile home. It is the law that an insane person found complicit in an act be detained in custody until the Governor’s pleasure is known. It is the law that law enforcement agencies found to infringe upon citizens’ rights pay substantial damages to such victims. It is also the law that a company improperly managed be wound-up.
Perhaps at this juncture, the law deserves a definition as simple as a body of laid down rules and regulations. Although these laws are laid down in written form in the case of Nigeria, it would take only a devil to know them all. Lawyers are also not excluded from this limitation in the knowledge of the law, as they are only trained to know how and where to find the law. This is the situation that every one has to manage and this explains the sight we often witness in the court especially in criminal matters whenever a man is convicted just before the judge pronounces the sentence. The plea of allocutus in our criminal procedure allows a convict to show why judgment should not be pronounced against him on a verdict of guilty, or, whether, he would like to make a statement on his behalf and present any information in mitigation of sentence. Whenever this door is opened for convicts, there submissions are usually the same; “I did not know what I did was against the law”. This claim of ignorance however does not hold water in the face of the strong and popular dictum that ignorance of the law is not and never an excuse. It matters only a little whether this claim of ignorance is believable or not. As I earlier pointed out, a mad man or young person cannot even be allowed in law to sleep on this mattress of ignorance. The ever dynamic nature of the law is also in favour of no one, as what is legal today could be illegal tomorrow. And it is only natural that our sense of inquiry be put on an edge. We want to know the law. We want to identify the law. We want to find the law.
However the law has since found its arm of punishment as a viable way of announcing its existence. It is only through this arm that we may best identify the law. It is striking that we do not coyly shake at the sight of a policeman simply because he is wearing a black and black uniform neither does some corrupt public officers shiver whenever the acronym EFCC or ICPC emerges from any angle. We naturally bow to these reflexes because we feel the presence or emergence of the law without a smiling face, if at all the law ever puts on a smiling face.
Although no innocent man should fear the law, in fact the law is not to be feared as it is just one of the living tools of a man. But it is a faceless tool. A faceless tool that is opened to justice through the instrument of penalty. A faceless tool that rewards no good. It would be one of the funniest ever proviso that anyone who returns a lost good should be rewarded with a sum of one million naira. The space for such reward and encouragement is not to be found in the law. No happy or impressed businessman would institute an action praying the court to commend his business partner for being honest in their business dealings.
Thus when we search and seek to understand and appreciate the law, especially as laymen, the most vivid part of the law that stares us in the face is that death penalty for that man found guilty of murder, the terms of imprisonment being served by that man found guilty of converting public funds, payment of fine, deportation, caning and a whole lot of other penalties the courts may impose as the facts of a case dictates.
And as such, the essence of the law is that we may recognise its power of punishment and leave the law as it is without attempting to break it, as a mere attempt to break the law is also punishable.
Olanrewaju Oloyede Esq.

NBA Reacts To Araignment Of Justice Onnoghen
Challenges with taxation system in Nigeria
Elections in Nigeria, What you need to know | Sam Omotoso. Esq, ACArb.