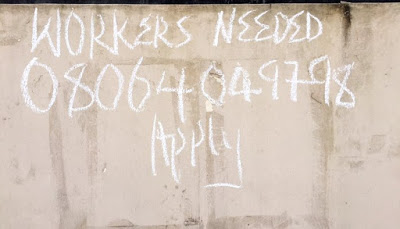 Many people would be aware
of the general crash in the price of a barrel of crude oil (at one point, even
Hennessy cost pass am); although the oil and gas sector has a history of boom
and busts, this would have been the lowest slump since the early 90’s. Unfortunately,
even industry experts did not see it coming.

Companies involved in
upstream activities, especially deep offshore, have been forced to simply stop,
with an estimated two-thirds of all rigs being decommissioned; the implication
of this is that, oil companies who previously enjoyed a booming business have
had to readjust their business operations, with many sustaining substantial
losses. Around the world numerous oil companies have gone bankrupt, resulting
in over 250,000 redundancies.

Nigeria has not been left
out of this ripple effect which has shaken the industry to its core. Many oil
and gas workers involved in upstream activities have been weak at the sight of
industry wide job cuts. The few who have managed to keep their jobs have faced
nonnegotiable pay cuts as an alternative to total job losses.

How Low Can You Go?
A friend of mine was the
general counsel for a reasonably sized oil company, life was good. She had
great company benefits, and could afford to pay for her son’s UK boarding
school fees. When the Oil Glut first started, as a senior member of staff, she
was given ample notice of the imminent changes and was advised to accept the
15% pay cut. Obviously she was upset about it, but she didn’t complain too
much; she knew that even with the 15% pay cut she was still making a lot more
than most people of equivalent years of experience. Life went on as normal.

Things got to melting
point when, after 8 months, the company informed her that there would be
further firm wide pay cuts, resulting in a total of 45% reduction in salaries.
It was made clear to all members of staff that, should they not accept the
further reduction of salaries, their contracts of employment would be
terminated with immediate effect.

Ooh boi… this, coupled
with the fall in the value of the Naira, was simply too much to bear. She
immediately found a job in the UK and took a 1 year sabbatical. The way she
calculated it, rather than work for half of her initially agreed salary, which
had significantly reduced in value when compared to other currencies, she might
as well work in the UK for a year, earning an equivalent of almost 3 years of
the reduced salary. Then, she will decide about her future with that company.
Termination and the Law
Generally the way most
employment contracts are drafted, the employer has the right to amend or even
terminate the contact; as stated in one of my previous articles, they usually
sneak in omnibus clauses under which, to a large extent, they can do what they
like. It is established law that the master servant relationships created by
the employee contract is, in most instances, governed and ultimately determined
by the terms of that agreement.

However, as regards the
Nigerian oil and gas sector, in an attempt to mitigate against prolific cases
of unfair dismissal as well as further support the hiring of Nigerians in the
sector, the Department of Petroleum Resources (“DPR”) on the 5th March 2015
issued the “Guidelines and Procedures for the release of Staff in the Nigerian
Oil and Gas Industry” (the “2015 Guidelines”).

The 2015 Guidelines
The main objective of the
2015 Guidelines is the establishment of procedures for obtaining the prior
consent of the Minister of Petroleum prior to the release of Nigerians working
in the Nigerian oil and gas sector. Ironically, this is not the DPR’s first
attempt at controlling the unfair dismissal of Nigerian content in the sector,
a similar guideline was issued in 1997 (which was mostly disregarded). However,
the 2015 Guidelines provide more comprehensive provisions and processes for
obtaining the consent of the minister before the “release” of workers, as well
as prescribing stringent consequences for disobedience.

The 2015 Guidelines define
“release” of a worker as meaning:-
“the removal of a worker
from the employment in a manner that permanently separates the worker from the
company whether such removal is by “dismissal; retirement ‐ whether voluntary
or forced; termination; redundancy; release on medical grounds; resignation;
death or abandonment of duty post”
Among the stringent
consequences for disobedience are:-
By the provisions of the
2015 Guidelines, it is only where the employee retires voluntarily, resigns,
dies or abandons his duty post that a “mere notification” to the DPR will
suffice, in all other instances consent of the DPR would be required in the
prescribed form.
Is This Gonna Work?
Some people are of the
view that as with many other ingenious ideas, arguably sporadically, developed
by the Government, monitoring and proper policing of the 2015 Guidelines will
be difficult to almost impossible. This leads one to question the number of
instances where these guidelines are being diligently adhered to, and where not
adhered to, how would the DPR ultimately find out anyway? I’m guessing that the
DPR will only find out where a disgruntled employee reports the company for not
following due process in the termination of their employment contract.
Some argue that the DPR
are going beyond the scope of their powers in trying to enforce such guidelines
as, as mentioned above, the master servant relationship created by the employee
contract is governed by that contract and the Government should leave parties
to have freedom to contract as they wish.

Conclusion
When I told my friend of the 2015 Guidelines, she informed me that she was very
aware of them, and confirmed that her company definitely did not have DPR
approval before sacking dozens of employees. She said upon informing the
company of the need to seek DPR approval before releasing staff, the response
was “Abeg, na DPR go pay salaries”; after seeing the MD’s bulging eyes, and
because she knew she was on her way out anyway, she promptly dropped the
matter.

However, most people are
not aware of the 2015 Guidelines and it sounds crazy that such important
information has not been brought to the attention of the general public, I am
sure there are hundreds of Nigerian oil and gas workers who, in light of the
recent issues with the sector, are not aware of the due process required by law
before the termination of their employment contract.

However, in saying that,
the legality of the provisions of these guidelines have not been tested, and
until that day no clear conclusion can really be reached.
Ed’s Note: – This article
was originally posted here.

Monday Motivation
Legal options available to victims of Medical Negligence in Nigeria- Ahmed Adetola-Kazeem, MCIArb (U...
What You Need To Know About The World Trade Organization