Humility, A Noble Mark Of Senior Advocates Of Nigeria 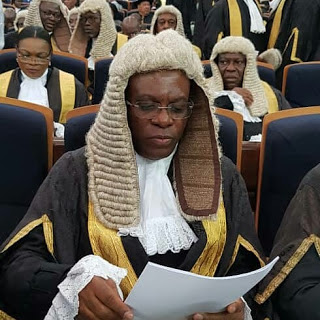 I
once remember sitting in the Federal High Court, Abuja waiting for the court to
sit about 5 years ago. Naturally, I had arrived early and chosen to sit on the
2nd row of  benches set aside
for members of the bar. I intentionally stayed away from the 1st row
since it was customarily reserved for members of the inner bar and I was not
sure if any Silks will be coming to court on that day.
As
the court began to fill up and others began to take seats around me, I noticed
a young lawyer sit right in the inner bar but paid him no attention. However,
several minutes later, a popular Senior Advocate also came into the court and
sat in the inner bar. Several more minutes passed and the younger lawyer who
was not a Silk did not do the needful and I could see the Senior Advocate begin
to pay attention to this young lawyer. Before long, the following conversation
ensued between them;
Learned Silk: – Barrister, how are you?
Young Lawyer: – Fine Sir
Learned Silk: – How many years at the
bar are you?
Younger Lawyer: – 10 years
At
this point, several other lawyers had begun to listen to the conversation, most
of us already knew the direction in which the conversation was going except for
the younger lawyer, who had not realized what was going on.
Learned Silk – You mean you are 10 years
at the Bar and you don’t know what to do?
Younger Lawyer – Now looking lost

Learned Silk – Are you really 10 years
at the Bar and you cannot do the needful.
Other
lawyers noticing the younger lawyer’s confusion and the rising tone of the
Learned Silk’s voice immediately called on the lawyer to leave his sit and come
join the rest of us at the back.
What
the younger lawyer failed to realize at that point is that the first row in
court is always reserved for the Senior Advocates and any other lawyer may only
sit there if there are no senior advocates in court or upon the express
invitation of the Learned Silk who occupies the first row or the Judge. Most times,
SANs would invite other lawyers to share the inner bar, especially when the
court was full and there were hardly any seats left for other lawyers.  On the other hand, there are a number of
Senior Advocates who would not share the inner bar with other lawyers who have
not attained the status and priviledge.
The
speech by the NBA President, Paul Usoro SAN at the conferment of the rank on
senior advocate of Nigeria on newly appointed silks at the Supreme Court on 24th
September, 2018, reminded me of my experience at the Federal High Court. The
Learned Silk and NBA President was addressing the new SANs on the need for
humility within the inner bar when he stated –
“​You were obviously chosen from the
large number of applicants based on your outstanding qualities of, inter alia,
intellectual fecundity, hard work, diligence, unparalleled advocacy skills,
sense of purpose, consistency, integrity and not least, humility. I include
“humility” amongst the qualifying attributes because, sometimes, our
colleagues of the Inner Bar tend to forget that the rank of SAN is best worn
with and in humility.  Humility, in general terms, exalts the
person.  In specific terms, humility stands out and elevates a Senior
Advocate of Nigeria – to wit, humility to the Courts, humility towards your
colleagues of the Inner and Outer Bars, humility towards your clients and
indeed humility towards members of the public.
It is the humility in you that would
order and oil your words and speeches in a way that makes them soothing and
respectful; it is the humility in you that would permit you to share your
deserved front-row seats with members of the Outer Bar who are not entitled to
the front-row seats as of right when you are in court but who are unfortunately
consigned to stand in a crowded and sometimes, stuffy courtroom and wait while
you conduct your case because all the seats to which they are entitled are
already occupied. Humility! That is actually the hallmark of great men and
you must not forget that fact while adorning your SAN rank.”
I
also look forward to becoming a member of the inner bar someday in my legal
career and when I do, I would not forget the words of the NBA President where
he says “Humility! That is actually the hallmark of great men and you must not
forget that fact while adorning your SAN rank”.
Adedunmade
Onibokun
Principal
Partner
AdedunmadeOnibokun & Co.